Sundance: 'Chelsea Does' Director Eddie Schmidt on Getting Real With Chelsea Handler For Netflix 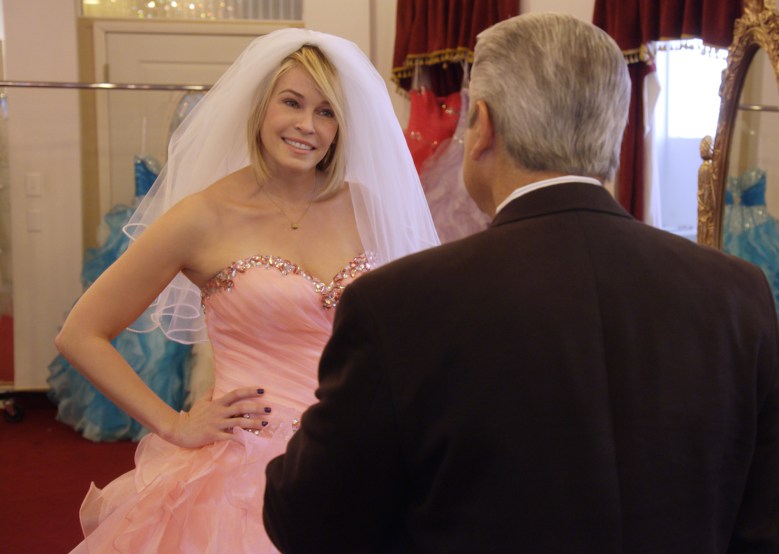 For months now, we’ve been waiting to find out what exactly it meant for comedian and host Chelsea Handler to leave “Chelsea Lately” and sign a deal with Netflix. But while the shape of her promised talk show has yet to be revealed, here’s the documentary “Chelsea Does…,” which features Handler taking on four specific topics — marriage, racism, technology and drugs — that interest her on different levels. Whether it’s hating her iPhone or putting on a bright pink wedding dress, Handler gets real and personal for the four almost-feature-length installments, which happened to be guided by director Eddie Schmidt.

READ MORE: Netflix Gets Topical With a Chelsea Handler Talk Show, But What Does That Mean?

Last Friday, “Chelsea Does…” made its Sundance debut prior to its premiere on Netflix. While Eddie Schmidt (“This Film is Not Yet Rated,” “Beauty is Embarrassing”) is no stranger to the Sundance world — he first brought a project to the fest fifteen years ago — his resume includes a lot more credits as producer than as director. However, according to him, the collaborative nature of making a documentary means that the shift in positions wasn’t too tough a stretch.

Indiewire got Schmidt on the phone a few days before he headed to Sundance to ask about what it was like to collaborate with Handler and what, given its unique nature, we’re even supposed to call “Chelsea Does…” An edited transcript follows.

I wanted to start off by finding out how you got involved with this project?

Netflix had approached Morgan Neville. Morgan and I produced a show, “Troubadours,” which was about the whole singer-songwriter movement five years back and then he and I also produced this big documentary called “Beauty is Embarrassing,” and we wanted to work on something together. And as soon as he mentioned this to me I jumped at it, because I’m a big fan of Chelsea, and I thought the fact that she wanted to go out into the real world and explore these topics in a documentary format seemed like an amazing opportunity to chronicle and collaborate.

What about actually going behind the camera and directing inspired you?

I’m sort of best known for a lot of my producing work in documentaries, but what everyone doesn’t know unless you make a lot of documentaries: It’s really collaborative. For many of the documentaries that I’ve produced, I’m also sitting there. I’m the cameraman. I’m also doing the interview. It’s all collaboration. I’ve worked with directors like Morgan and I’ve directed a lot of pilots and stuff like that. With this, I think Morgan knew that I had a sketch comedy background. So, before I even got into docs I did a lot of sketch comedy, and I think it helps my doc work, to be honest with you, because you have to be ready for anything. And so this was a really unique fit of these being real documentaries with an incredible, funny person at the center with a great point of view. Where, wouldn’t it be fun to see her experience all these situations?

You said you were a big fan of Chelsea’s before you started the project. Had you met her? Did you know her at all in real life?

I didn’t know her in real life, but my wife watched the show quite a bit. I liked the freshness of her voice. She really says what she thinks. She really wants to engage with the world and that’s something that I found really quickly. She has a strong natural curiosity about everything. She doesn’t know that she hasn’t seen and that’s an incredible engine to drive any documentary really. A lot of times you have a funny person who wants to joke around, but with her you have somebody that actually wants to figure something out. 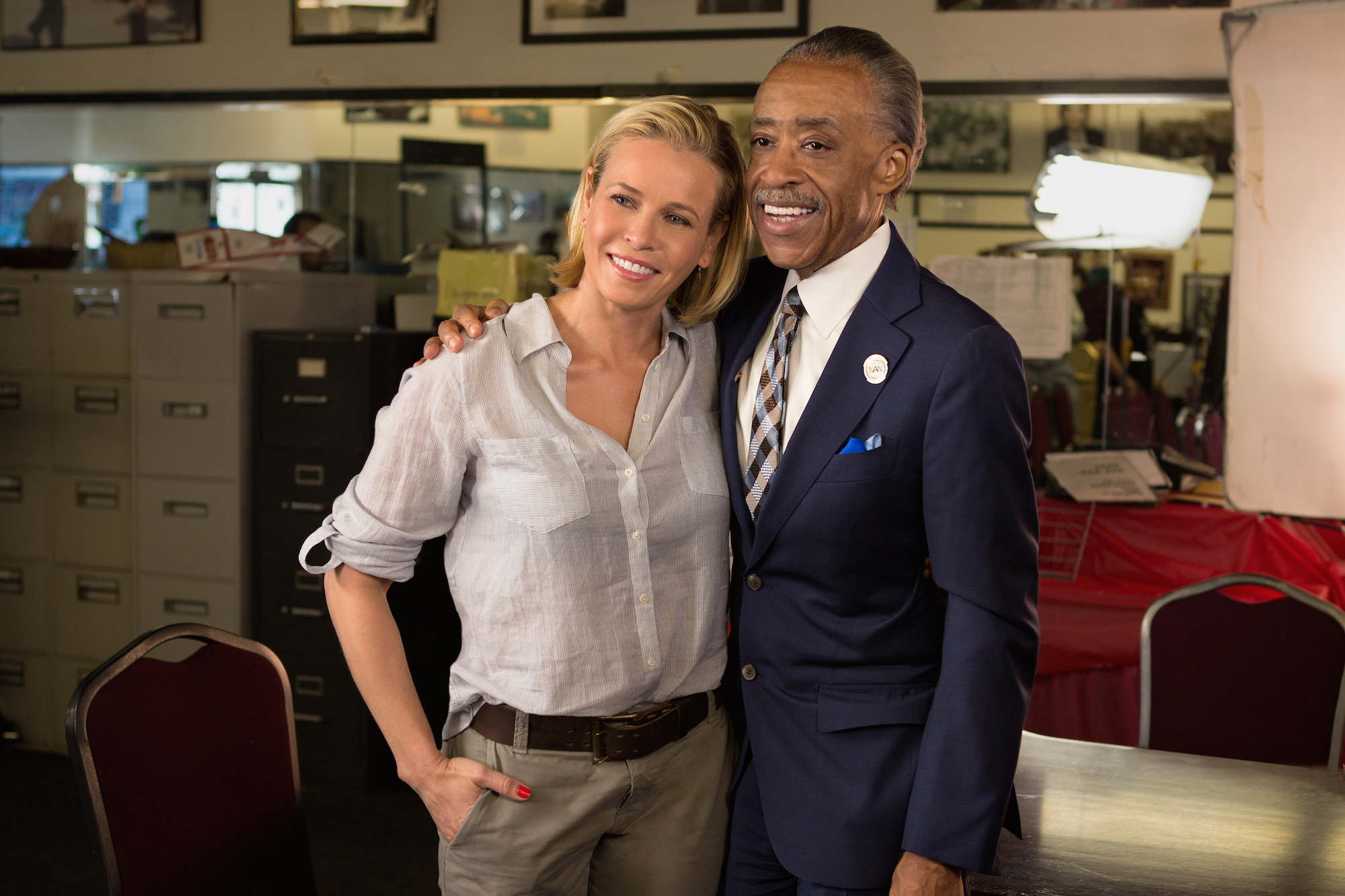 That must’ve been a real help.

Oh yeah. Tremendously. I think that she had been doing a studio-based show, so I think she found it liberating. She got to go into America. And bring with them all the gifts of interviewing so many people over so many years. But she was interested in somebody doing something unique. She brings so much of her own self into her interests.

Very early on. I think that she enjoys people so much that having her talk about these topics, relaxing with friends, seemed like the perfect springboard. To give you a seat at the table. You’re with them. It brings you along the journey, and it anchors you back. I think she has great friendships and enjoys banter and enjoys discussions. What a great window into what she’s really thinking about at the time — what she’s scared of or what she’s thinking about — and that starts a discussion.

How much did the panel discussions influence the other elements of the episodes?

I think what they did is show us what’s going on in her head as she tries to figure things out. I don’t know if it inspired us, but I think it gave us a sense of what she wanted to find out.

When you guys were actually out in the field, I’m sure there were tons of amazing things that happened that didn’t quite make the cut. I’m curious: Is there anything that really surprised you once you were out there with her?

I think what surprised me was able to get to the points she wanted to and her ability to not beat around the bush. She talks to people and just goes up and asks them what most people would want to ask, but are afraid to ask. And then the way that she is disarming and charming.

The race episode is interesting because she’s not shy or reserved at all about confronting people.

No. Again, it’s because she’s trying to understand it. And part of what I think she’s saying is there’s this idea of politeness that prevents us from understanding how people really think. We’re sort of surprised by what we find, but maybe we shouldn’t be. If we talked about it, we’d have a real understanding of the gaps that exist.

That’s a great way of looking at it. Was there anything you felt like you had to push her to do, that she was reluctant about?

No. I think that the marriage episode is personal in the sense that, as she says in the film, exploring this stuff and her feelings was making her more vulnerable. So, I think when you deal with personal topics in a documentary, you certainly want people to be able to be vulnerable, but in the best way. In the sense that they trust you and want to be vulnerable because I think an audience appreciates a person letting them in.

So, congrats on Sundance.

This is not your first time there?

No. It’s not my first time, but it has been incredible in terms of my career. It’ll be my sixth project at Sundance. The first one was “Chain Camera” with Kirby Dick back in 2001. And you know, there’s nothing like it. It’s an incredible platform for documentaries. Their curation is wonderful. They’re picking amazing films, so it’s an honor to be there. But I think they’re positioned in such a way that people really appreciate them because they know that Sundance really means something. So, it’s been invaluable.

For this project in particular, what does having a Sundance slot mean?

It exemplifies the fact that Chelsea is working in a different area — doing something different than she did before.

How many of the episodes are going to play?

One. The marriage show.

Is there any reason why you chose that one?

I think they chose it. They wanted to show that one. I think it’s a good place to start because I think it is personal and real and you get to meet her family and people in her life that she’s close to, so it’s kind of a great introduction to the series and a great reintroduction to her.

It’s funny, in the course of this conversation, you and I have been going back and forth a little bit — not in a confrontational way at all — but we both seem to be figuring out what the terminology is for this.

[laughs] Whether they’re films or a show?

They’re not quite full-length features each, but they’re pretty long and they feel like they’re of a piece. Is that kind of how it all evolved?

You are taking a chance to make something interesting with a very interesting personality. The worst thing is to want to have something longer or shorter and that has to conform to a certain number. They are a feature film structure, but they are as you say, more of a documentary film series.

How hands-on has Chelsea been with the editing?

In the back of your head, is there a Season 2? Are there more things for Chelsea to do?

I think… there will be other things to come. If there were more topics, but these were the topics she wanted to explore.

So, if there were more topics she wanted to explore down the line would you be on board?

“Chelsea Does…” had its Sundance premiere on Friday, January 22. The entire… whatever it is… is now available to stream on Netflix.