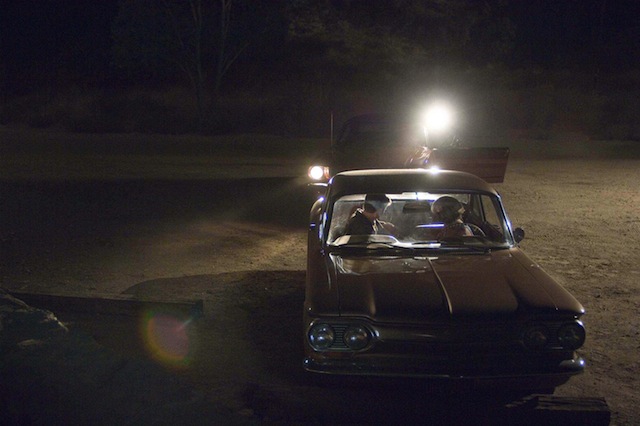 Criticwire’s New Classic of the Day examines films released in the last ten years (2006) that are posed to stand the test of time.

An obsessive film about obsession, David Fincher’s “Zodiac” doesn’t much care about the eponymous serial killer at its center, but instead turns its focus on the debilitating effects of relentlessly pursuing a mystery with no clear answer. Inspector Dave Toschi (Mark Ruffalo), “San Francisco Chronicle” crime reporter Paul Avery (Robert Downey Jr.), and the “Chronicle’s” curious cartoonist Robert Graysmith (Jake Gyllenhaal, in possibly the best performance of his career) are all drawn into an indelible web of facts and fiction as they try to draw out the public menace that lurks in the shadows. But as time goes on and the murderer fades away, they’re all left with frustration, ruined lives, and in the case of Graysmith, a doomed quest for the truth that only produces more questions. “Zodiac” is about the futility and desperation of obsession, and how the pursuit can provide life with meaning but at the potential cost of one’s sanity.

There are so many avenues of entry when discussing a perfectly made film like “Zodiac,” with elements worthy of analysis ranging from from Fincher’s inspired casting choices (such as Anthony Edwards as Toschi’s reactive partner Bill Armstrong or Charles Fleischer as the creepy Baron Vaughn) to editor Angus Wall’s rhythmic editing that somehow compresses large amounts of facts and long periods of narrative time without short changing either. However, the best place to start has to be Fincher’s hyper-controlled direction, and how “Zodiac” may be the only film of his where form poetically meets content. Fincher makes the detailed-oriented, all-consuming feeling of “Zodiac” sing by meticulously packing every frame with visual and narrative information, but also by embodying the obsessive minds of its subjects. This is most readily apparent in how he conveys the passage of time: Notice his compulsive use of time stamps to demonstrate how quickly time passes in reality but how slow it feels to people like Graysmith and Toschi, or his use of transitions, like the time lapse scene of the Transamerica Pyramid being built set to Marvin Gaye’s “Inner City Blues,” that are showy but also throw the draining effects of age in the face of his protagonists. “Zodiac” is as much about how a mystery takes shape over long periods of time as it is about the mystery itself; it depicts how a cultural terror can recede in the mind of the public but feel urgent in the minds of those who still hang on.

In fact, one of the best, least remarked upon elements of “Zodiac” lies in James Vanderbilt’s wonderful script, specifically the key structural choice to bury Graysmith until the last hour, effectively pushing him to the edge of the story for the majority of its running time. Though “Zodiac” opens on a murder in Vallejo, California, its opening credits establish Graysmith as the audience surrogate, the interested on-looker in the corner who knows more than he lets on. But Fincher and Vanderbilt maintain focus primarily on Toschi and Armstrong’s efforts to track down the Zodiac, cutting back to Graysmith and Avery’s stories intermittently. It’s only until the last hour when the Zodiac case has all been forgotten that Vanderbilt brings Graysmith back into the fold in a major way, as he becomes the self-appointed Zodiac expert trying to put together all the pieces so something shakes loose. What was once an ugly cultural phenomenon has turned into a private, unsettling obsession as Graysmith turns into a frustrated recluse grasping at any and all straws, losing his job and his family in the process. Though Downey rightfully received the lion’s share of the performance credit at the time of “Zodiac’s” release (although it’s telling that his tics and delivery that work so well in this role would quickly become codified into schtick by the time of “Iron Man”), it’s Gyllenhaal’s performance that really stuns in retrospect, as he starts out an eager library weenie and devolves into a hollowed-out mess of a human being. By the end of the film, Graysmith assumes the visage of someone who has spent too much time in blind alleys and can’t seem to find a way out of the maze of his own creation.

What’s telling about “Zodiac” is how much of the film depends on an abiding sense of melancholy, the sadness that comes from searching for answers and just coming up short every time. Though “Zodiac” depicts a specific time in American social history, when an active serial killer could reasonably take the place of post-60’s fears enervating in the larger culture, its larger concerns are much more timely. One of the best scenes in the film features Graysmith discussing the potential of a Zodiac book to a washed out Avery who can’t seem to understand why he cares about the case anymore. “Do you know more people die in the East Bay commute every three months than that idiot ever killed?” he sneers. “He offed a few citizens, wrote a few letters, then faded into footnote.” Similarly, whenever Graysmith brings the case up with principal figures like Sgt. Jack Mulanax (Elias Koteas) or Mel Nicolai (Zach Grenier) years after the fact, they look at him with a borderline-condescending curiosity, like he’s an intelligent mental case who keeps biting at people’s heels. The melancholy in “Zodiac” comes from a very American conception of professional dedication, how the futile search for closure ultimately becomes the only dispenser of meaning in a chaotic world. When Graysmith babbles on to his wife Melanie about how he needs to know who the killer is, she casually says that’s not good enough, and she’s right. It’s not a good enough reason to mindlessly pursue anything for that long, but for some, it’s just all they have.

Though some will argue that the film’s main flaw is its insistence that Arthur Leigh Allen (John Carroll Lynch) is the Zodiac, in effect belying the film’s driving thematic concerns about obsessions with no closure, that seems like a very literal approach to “Zodiac.” Vanderbilt adapted the screenplay from Graysmith’s books which do argue that Leigh Allen is the killer, but the film repeatedly states that all the evidence against Leigh is circumstantial, eerie coincidences that nonetheless have no basis in hard evidence. In fact, the title cards at the end not only state that Leigh died before he was to be questioned by the police at the end, but that a DNA test from his autopsy didn’t match the partial DNA sample from a Zodiac letter. Near the end of the film, Leigh Allen serves as the eureka moment for Graysmith who confidently presents all his evidence to Toschi to “prove” it’s him, except that his explanation doesn’t prove anything, really, as Toschi repeatedly tells him. He’s just another spectre that may or may not be the man in question. “Just because you can’t prove it doesn’t mean it’s not true,” Graysmith exhaustedly tells Toschi, a statement that’s accurate but ultimately irrelevant in terms of real life closure. Yet for Graysmith, Leigh functions as the personal closure he needs to move on.

Despite its focus on unsatisfied obsession, “Zodiac” satisfies as a film on a moment-to-moment basis like few of its contemporaries in the past decade. It’s not just that Fincher and co. expertly control the pacing and tempo of a two-and-a-half hour thriller that goes in circles, but rather it’s certain filmmaking choices that only make themselves known after you spend enough time with the film. There are the obviously brilliant ones, like Fincher mining the psychedelic dread of “Hurdy Gurdy Man” to soundtrack a brutal killing, or how he frames Graysmith’s suspenseful encounter with Vaughn at his house like a mini horror film, but then there are the other choices that gain resonance after repeat viewings. There’s Harris Savides’ muted photography that shines because it embodies an indefinable paranoia and distrust; David Shire’s tense, yet contemplative score that recalls the best work of Walter Murch; or even just certain wonderful scenes, like the cross-cutting between Toschi/Armstrong and Graysmith/Avery analyzing the case and coming to the same conclusions despite having different information, the bar scene when Graysmith and Avery become something resembling friends, or even the darkly comic scene of Armstrong trying to coordinate with three different counties about information in the case, struggling how to obtain it when no one has a Telefax. “Zodiac” has aged wonderfully in the interim nine years and easily stands as one of the best films of the decade because it keeps on rewarding viewers who provide their attention, even if what it gives isn’t necessarily the answers they’re looking for.