What Does a 21st Century Film School Look Like? Part 2 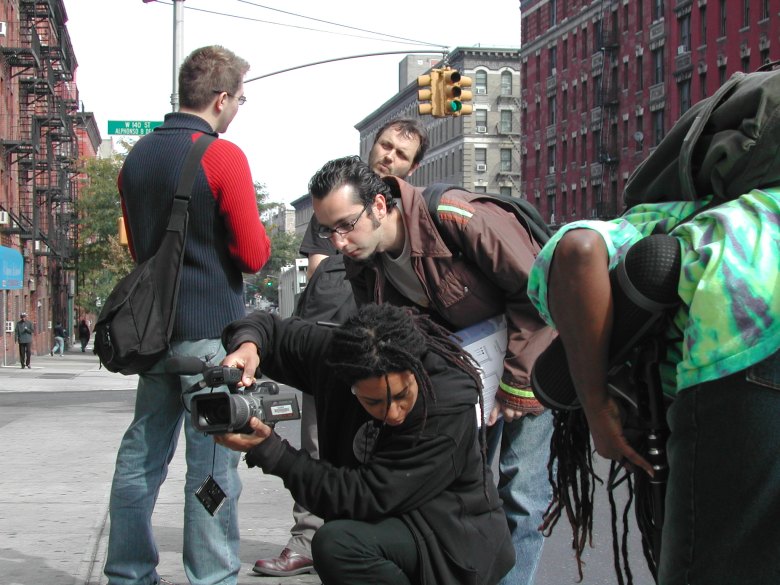 READ MORE: What Does a 21st Century Film School Look Like? Part 1

This week Indiewire is examining grad schools and asking what a 21st century film school should look like. Yesterday, we profiled Brooklyn College’s brand new Feirstein Graduate program and its field specific professional training ground. Today we look at CCNY’s own MFA film program at the City College of New York, which takes a very different, in some ways polar opposite, approach to training the next generation of filmmakers.

Started in 1941 by Dada artist and filmmaker Hans Richter (originally the school was called the Institute for Film Techniques), the Harlem-based program has evolved quite a bit over the last 70 years. Its current version, as a two-year MFA, came into being in 1997 and initially offered five specializations: zwriting/directing fiction, writing/directing documentary, producing, editing and cinematography. Over the last few years, in an effort to match changing trends in the film industry, City College dropped its field specific producing, editing and cinematography tracks and moved more toward a “total filmmaker” approach.

Indiewire recently spoke with professor and MFA co-director Andrea Weiss to discuss what City College believes is vital to a modern film education and what it means to teach the “independent filmmaking model.”

Can you detail of how your MFA program has evolved in recent years?

We usually take about 24 students a year, so under the old model, we would choose 6 writer/directors in fiction and 6 writer/directors in documentary, and the other 12 students were a mix of editors, producers and cinematographers. With those numbers, we would have 12 thesis films from each class, half in fiction and half in documentary, and the other 12 students would work on those productions in the capacity of their specialization. But three to fours years ago we made a change we had been discussing for awhile, and that was to eliminate the non-thesis tracks of editing, cinematography and producing, and allow everyone accepted into the program to write and direct a thesis film. What prompted this change?

This change was partly because, as such as small program, we didn’t have enough producers or editors or cinematographers in any given incoming class to really offer them the in-depth specialization in each of their areas that having those specializations implied. And we didn’t want to expand the number of acceptances in order to have enough; our program was already working really well as a small boutique program.

But the other, bigger reason is that we teach the independent filmmaking model in which filmmakers often have to be versatile and perform many roles. Increasingly this is so, given smaller, lighter equipment and more and more competition for funding.

So you are putting more emphasis on the “total filmmaker” over focused technical training for a specific job, like an editor, cinematographer or producer?


This is true. Of course, we do teach technical skills, but our focus is on the all-round filmmaker. One of the things we emphasize is guiding our students to figure out what kind of filmmaker they are, what they have to say as a filmmaker. Because our program is extremely diverse and international, students bring to the program a wide array of personal experiences and cultural perspectives, as well as different traditions and modes of storytelling. There is no specific “school” or style of filmmaking that we advocate, but rather we aim to help our students find their voice and their passion so they can contribute something that is new, honest and unique to them.

With this “total filmmaker” model, all students are also required to have technical training in cinematography, sound recording, editing, producing and sound editing. In addition to intensive classes and workshops in each of these areas, students are required to produce one other classmate’s thesis film, and are also required to serve in a major crew position (such as cinematographer or editor) on a classmate’s thesis film to make sure they are using and strengthening the skills in the second year that they learned in the first. We encourage them during the first year to work as much as possible in areas they are weakest in, so they can shore up their skills on low-stakes exercises in the first year and be better prepared for the thesis projects in the second year.

How does this put your students in a better position after they graduate?
Given the demographics of our students, they are usually not in a financial position simply to develop one project for the several years it sometimes takes; they need to start earning money as soon as they graduate. By teaching them to do many roles — obviously, not all will be strong in all areas — they can start jumping on board productions in any number of capacities to utilize their skills and earn a living in the film business, while at the same time trying to develop and launch new projects after film school.

We wanted to give them as many tools as possible to enable them to survive using their filmmaking skills and to get a foothold in the film business while working to get new projects off the ground.

Does this transition your program has undergone mirror what has happened to the indie and documentary film in the digital age?

Yes, that is another reason we decided to train the “total filmmaker.” In independent film, production budgets have gotten smaller and, as a result, so have production crews. Very often funding comes piecemeal or doesn’t come at all until the rough cut stage — and how do you get to the rough cut stage without funding if you need to pay a large crew, or can’t do anything yourself besides write and direct?

In documentary, cinematographers are even sometimes expected to record sound, something I’ll probably never get used to — I’m of the 16mm indie filmmaking generation. In general, requiring everyone take courses in all areas — editing, producing, sound and post-production sound — and assume those various crew positions on other students’ films was in direct response to changes that started occurring with the advent of digital filmmaking. Given how many students pour out of film schools each year, we want to prepare our students as best as we can for life after film school.

Can you briefly take me through the broad strokes of your program?

This is a two-year program. The first year is more classroom/workshop-based and offers an immersion in skills such as camera and sound and editing. They take specific courses in each of those areas; cinematography is a full year course and the others are for one semester. They take a digital production course in their first semester that is jam-packed with short exercises and assignments; some of the short films produced in that class have won festival awards internationally and one garnered a student Oscar.

They also have a critical studies course in their first semester that exposes them to an array of masterpieces of world cinema. Depending on whether their specialization is fiction or documentary, they take either Screenwriting I or Research and Writing for Documentary I in the Fall, and Screenwriting II or Research and Writing for Documentary II in the Spring. In the spring, they also have a course in Directing Fiction or Producing and Directing the Documentary.

The second year is less structured than the first and is focused both on the thesis film and on preparing students for what they will do upon graduation. There is an intensive one year thesis workshop for mentoring the projects and giving in-depth critiques at various stages. There is also an “exit course” in the spring taught by Nancy Gerstman, founder and co-president of Zeitgeist Films, which helps students develop a festival plan and strategize on what they need to do to get their film out into the world. The spring semester of the second year also allows for internship placements around the city, and for Teaching Assistant (TA) experience in the BFA program, for those who want to use their MFA to teach.

What is the benefit to exposing students to advanced documentary and narrative skills? Does this relate back to the “total filmmaker” approach? In the festival world, we are definitely seeing a trend toward filmmakers making both types of films, with narrative film adopting doc techniques and the rebirth of the cinematic doc.

We have found that some students specializing in fiction end up working in documentary upon graduation and vice versa, and we decided we need to prepare them a little better for that. For example, we have an alum, Jayan Cherian, who specialized in documentary, but went on to make two low-budget fiction features in India right after graduation. But more often, it is fiction students who end up working in documentary, often while trying to raise money for their fiction projects. Jayan integrated documentary techniques into his feature film, worked with non-actors, included observational scenes and explored urgent social issues. We treat both genres as “visual storytelling” and feel the students should have at least some grounding in both.

Some of our students come from countries where the film industry is very small; it would limit their options considerably if they were prepared to work in only one aspect of it. We have a current student from Myanmar who is specializing in documentary, but on the first day he told us that he can’t go back to his country without a foundation in fiction as well as documentary. So he is taking the first-year screenwriting and directing fiction classes on top of his regular documentary course load and making some fiction films as short exercises — although his thesis film will be a documentary.

This Article is related to: Toolkit and tagged Documentary, Film School, Toolkit