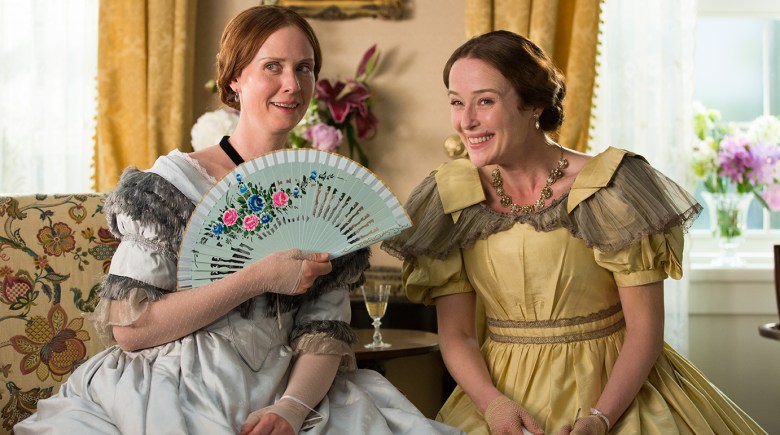 Who else but Terence Davies could condense Emily Dickinson’s life into a question of religious rebellion? With “A Quiet Passion,” the Liverpool-born auteur interprets the nineteenth century poet as a tailor-made conduit for his chief concerns and interests: family, patriarchy, death and Catholicism.

Given its themes and the tragic circumstances of Dickinson’s life, “Passion” is a refreshingly humorous work. Its firecracker dialogue is invigorating; the assured, measured compositions are equally compelling. And in its sensitivity to intersecting conflicts related to womanhood and class, it is quietly masterful.

Dickinson was born in 1830, and spent most of her life in Amherst, Massachusetts — where she died in 1886. She was the second of three children: her brother Austin was born in 1829 and her sister Lavinia (known as Vinnie) was born in 1833. Their father, Edward Dickinson, was a state legislator and prominent politician who adhered to the principles of the Whig party. The family lived the majority of their lives at the Dickinson Homestead (now a museum), reacquired by Edward in 1855 — 15 years after financial troubles had forced him to sell it.

“A Quiet Passion” opens in 1848, when Emily Dickinson (Emma Bell) returns home from the Mount Holyoake Female Seminary — which she attended for only 10 months — suffering, in her own words, from “an acute case of evangelism.” Davies establishes the young woman’s questioning and defiant nature in the opening scene, in which our heroine refuses to categorize her own faith. As the seminary’s founder and principal, Mary Lyon (Sara Vertongen), warns her: “You are alone in your rebellion.” 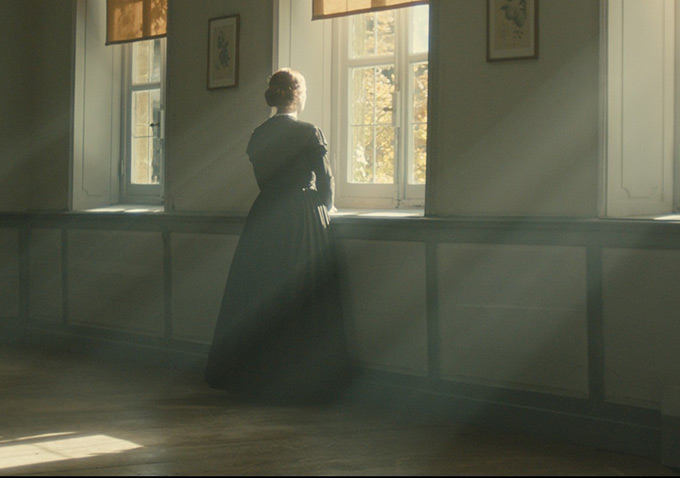 Emily’s calmly mutinous views are deeply informed by a frustration with the prevailing currents that affected a great deal of political and social life in nineteenth century America. Though trapped to a large degree by the gendered bigotries and religious temper of the time, she was in many respects ahead of it. We see her eruditely and playfully exasperate older relatives. When likened to Robespierre by her Aunt Elizabeth (Annette Badland), she fires back her preferred comparator: Charlotte Corday, the French Revolutionist who was executed in 1793 for assassinating Jacobin radical Jean-Paul Marat.

Emily asks for permission from her father (Keith Carradine), an imposing but liberal-minded figure, to spend the nighttime hours writing poetry. Agreeing, Edward also promises to get in touch with Doctor Holland (Josiah Gilbert), a family correspondent and editor of the Springfield Republican. Soon after, Emily has her first poem anonymously published.

“A Quiet Passion” settles into its defining form after a brief, transitional sequence in which the Dickinsons pose for separate daguerreotypes. Davies employs a unique dissolve effect by which the faces of actors playing the younger siblings are subsumed, one by one, into those of older peers. Rose Williams, playing young Vinnie, dissolves into Jennifer Ehle; Benjamin Wainwright, as young Austin, dissolves into Duncan Duff; Emma Bell “becomes” Cynthia Nixon — and Keith Carradine loses some hair. 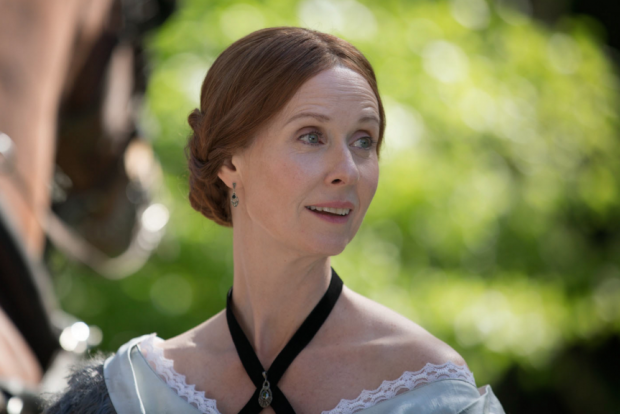 Played by Nixon, Emily is a sympathetic, intellectual character. Vitalized by her companionship to Vinnie’s friend Vryling Buffam (“sounds like an anagram, doesn’t it?”), she is encouraged in her burgeoning dissatisfaction with the more intransigent undercurrents informing American life. Buffam, an outgoing socialite who likes to keep men on their toes (“he dances like a polar bear”), is played with infectious verve by Catherine Bailey — who, in light of the restrictions of the chamber-piece setting, must embody and stand in for the more progressive social tendencies to which Dickinson was able to respond throughout her later years.

As such, Bailey gets to deliver the film’s funniest lines. (Two examples: “Going to church is like going to Boston — you only enjoy it after you’ve gone home”; “America’s the only country in the world that looks upon death as some kind of personal failure.”) Such dialogue ricochets through artfully stylized scenes, enlivening the unfolding drama even when a certain, inevitable dread creeps in (no excuses, critically, for expecting any of this to have a happy ending). Some audiences might be put off by the extent to which characters philosophize here, but Davies — who rarely lets a chance to filter autobiography slip — utilizes such dialogue to work through his thematic riffs in similar vein to D.H. Lawrence.

As characters come and go, we watch Dickinson mature, donning white cotton in the aftermath of her father’s death and challenging an editor who dared to publish her poems with edits to which she didn’t agree (“lowering the standard is the first excuse for every villainy”). Nixon commits to the role to such a degree that we can see this history pulsing through the veins in her neck. She is excellent — and her chemistry with Ehle in particular is palpable and endearing.

Reuniting with cinematographer Florian Hoffmeister, who also shot “The Deep Blue Sea” (2011), Davies composes scenes with typical intelligence. An early moment, in which the Dickinsons attend the theatre, depicts the family in a single frame, with the younger siblings in one box and Edward and Aunt Emily in the adjoining one; a partition divides them. Davies sustains the shot without privileging any individual in particular: the antagonisms that emerge are as layered as the composition itself is blunt. At other points, such as when Edward and Austin argue over the latter enlisting at the outbreak of the Civil War, Davies heightens the animosity by compartmentalizing their collision of interests into close-ups of each actor’s face. 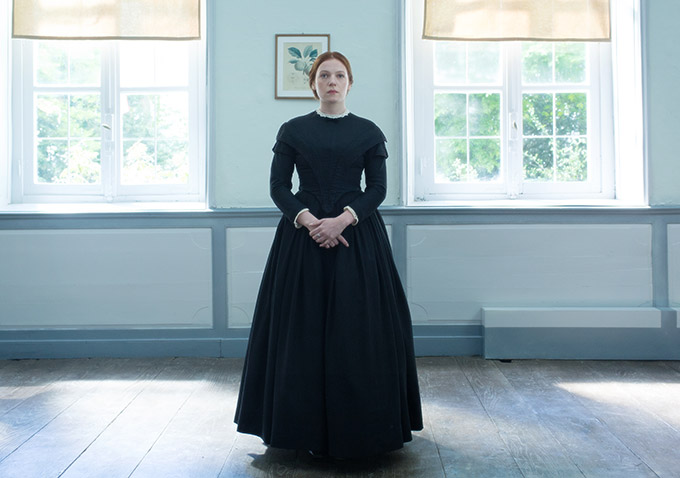 Hoffmeister is tasked with the increasingly common problem facing cinematographers shooting on digital for period productions. Having to conceptualize a believably textured, lived-in universe with light rather than carving one out of shadows is never easy, but he’s done an exceptional job here: the suffocating claustrophobia that plagued Dickinson is captured so well by those exterior scenes on the homestead’s grounds — the shallow-focus close-ups evoking the impression of surrounding flora while also relegating it to a mere blur.

Shortly after its premiere at the Berlin International Film Festival, Davies’s film was labeled “overly mannerist” in some quarters. Though it’s true that his approach often results in films that feel cerebral rather than intuitive, if this is “overly mannerist” then so are all of his other works. Shot primarily at Antwerp’s AED Studios and partially funded with Belgian money (a telling indictment, perhaps, of the financial state of the UK film industry), this long-gestating project is observably the work of the same thoughtful, sincere mind behind “Distant Voices, Still Lives” (1988). Now 70 years old, Davies has been nothing if not consistent.

Indeed, “A Quiet Passion” is so evidently in tune with the filmmaker’s sensibilities that it can be difficult to fault it without sounding in some way prejudiced. While the personal nature of the director’s work can sometimes make admiration easier than all-out love, filmmakers like him are in short supply. When so few are able to translate their needs and vision into self-articulating works of art, Davies should be cherished for knowing and making exactly what he wants. And from the opening shot of 14 women about to be segregated by questions of faith, to the closing one of mud-brown earth accompanied by Charles Ives’s “The Unanswered Question,” his latest effort is sublime.

“A Quiet Passion” premiered this week at the Berlin International Film Festival. It is currently seeking U.S. distribution.