John Travolta and Courtney B. Vance on the Love Affairs in 'The People v. O.J. Simpson' That Did and Should Have Happened 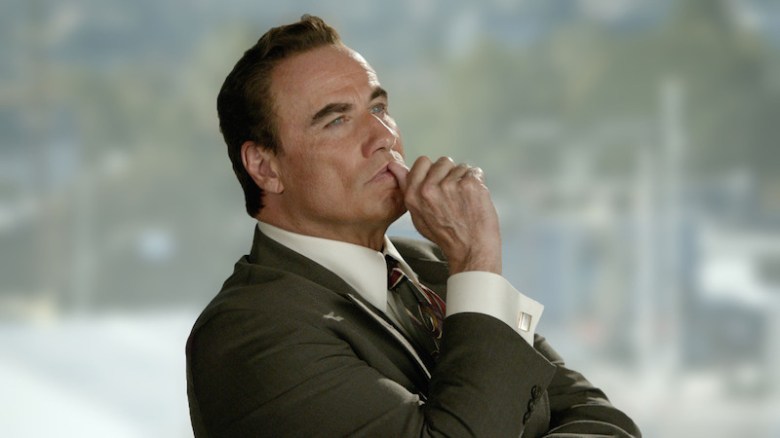 In the most recent episode of “The People v. O.J. Simpson: American Crime Story,” the biggest drama had very little to do with the double homicide with which the series begins. Instead, we watched as Robert Shapiro (John Travolta) and Johnnie Cochran (Courtney B. Vance) battled for control over the so-called “Dream Team” of lawyers assembled to defend Simpson.

In talking to Travolta and Vance at the TCA Winter Press Tour this year, war metaphors came up a fair amount, both in discussing their complicated relationship as well as that of the bond between Marcia Clark and Christopher Darden (as portrayed by Sarah Paulson and Sterling K. Brown). But both were relatively cheerful when it came to discussing the FX drama, their personal memories of the original trial and what goes into portraying real people versus fictional. An edited transcript is below.

JOHN TRAVOLTA: I’ll start with the last bit. It’s not changed, but I’m enlightened. I understand why this case went the way it did, and it may have had nothing to do with the actual case. It may have had to do with the bigger picture, a concept that is not unhandled from earlier things, like Rodney King and what have you. So, I understand the bigger picture, I was enlightened by this.

And my dad was a football coach and a football player, and he worked with Vince Lombardi, so he was obsessed with it. But [at the time] I, actually, was celebrating “Pulp Fiction” and all that that implied, so I was having a career resurgence as I was watching this poor man go through the downward trajectory. How do you view that, you know what I mean?

TRAVOLTA: So I kept in touch with Dad, because Dad had a take on it that was up on every detail. 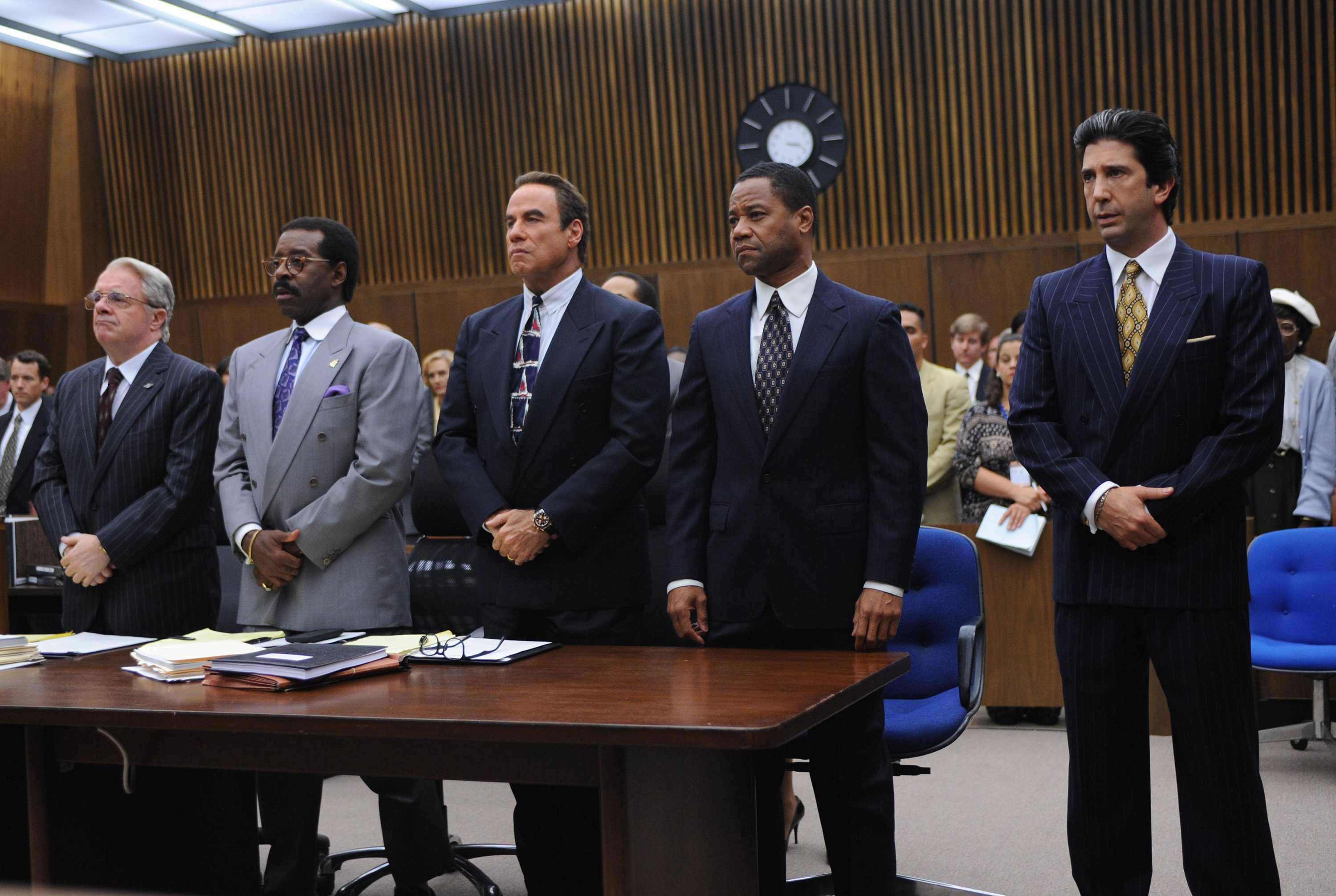 If you didn’t know who O.J. Simpson was before the trial, your opinion of him and what happened seems like a hugely different thing. For you, sir, what was your experience during the original time?

COURTNEY B. VANCE: I was there for the Bronco chase, like all of us, but after that… I mean, I just thought that, “Oh this is interesting…Whoa…” because we had never seen that before. “That’s O.J. Simpson? He’s got a gun? And the basketball finals, they’re not gonna bring it back? Whoa… There’s nothing on any other channel but this?” That was really… We had never seen anything like that before in my lifetime. Maybe the lunar landing or the Kennedy assassination, that was it. So, this let me know right away that, “Wow, this is going to be a lot.” And I’m a big O.J. Simpson fan from USC and the Buffalo Bills and all, so I said, “You know what, I can’t take this right now, I can’t deal with this.” It was overwhelming to me. I kind of tuned it out.

In terms of playing people who are real people, which I know you’ve both touched on in your careers, what is it like to know that people out there already have this consciousness of these characters, as we refer to them in this project?

TRAVOLTA: Well, I feel that if you’re playing a character that’s famous, like I did with [President] Clinton, I feel like you have to give enough of the illusion of who [the audience is] watching to invite them into the story. You don’t have to be exact, but you have to do enough to say, “Don’t worry about watching the actors playing it. Now you’re watching the character. That’s my job, that’s our job.” That’s my take on it. Enough to lure you in, now let’s tell the story. Because if you do too much, it gets upstaged. If you do too little, then your personality upstages it.

VANCE: It’s very delicate. And you have to be helped with that, you have to really be clear with your instrument and who you are and how best you work and how much time you have.

TRAVOLTA: That’s true, and your own techniques of how you build a character. Everybody’s very different, that’s what I love. I try to tell young actors, I say, “Look, you develop your own way you build a character.” It’s not some definite thing. There are some definite rules, but there’s not an absolute thing on how you build it. If Courtney absorbs one thing one way and I absorb it another way, as long as we get to the result, that’s all that matters. 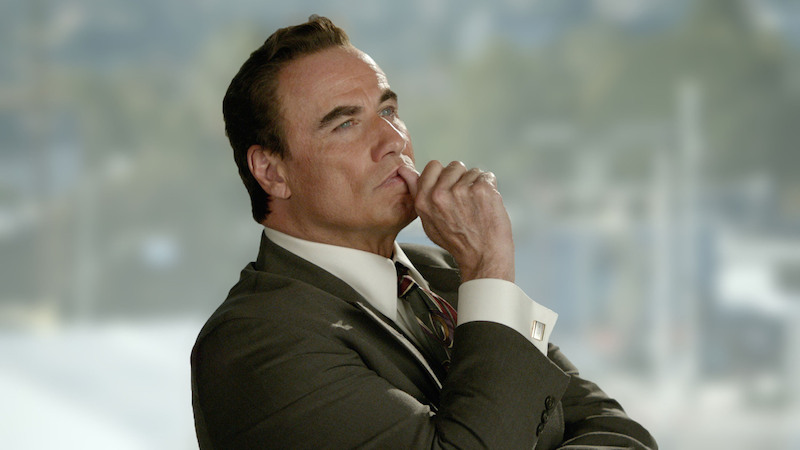 Is there one specific thing you learned about both your characters that made you understand the real people better?

TRAVOLTA: [laughs] There were so many that made me get him. I don’t know if there’s one thing.

VANCE: I’m gonna jump in, John. I think that scene where [my character] said, “I’m here to win.” Johnnie Cochran was about the end result, and once I heard that and figured that out, knew that, I knew the rest of it. On some days, the journey to winning the war, you lose the battles. So, he said, “You know what, this is not our day, let’s fold up our books. I’m sitting here seeing that they got us today.”

TRAVOLTA: The ebbs and flows of it all.

VANCE: The ebbs and flows, it’s a marathon. That’s fascinating to me, John: how they actually spent a year with their lives and everything else going on, and they had to go home and do research, they had to do homework during the evenings.

TRAVOLTA: Do you remember the line that I had with David Schwimmer at the end of… I don’t know what episode it was, you haven’t seen it yet, it’s later, but he’s just so afraid he’s not human, and I say, “We’re not human. We’re lawyers.”

TRAVOLTA: And actually, it’s like… Whoa! And that’s the truth. They are practicing law, they’re practicing the judicial system. It’s very different than being a human being.

Sarah Paulson and Sterling K. Brown, talking about Marcia Clark and Christopher Darden, described their relationship as war buddies. They, of course, had a very different relationship than your characters, but still the idea of being a soldier in wartime applies.

TRAVOLTA: Did [their characters] have an affair, actually?

VANCE: They did. But we never had one. [laughs]

TRAVOLTA: We should’ve. [laughs] But our show never emphasized that.

I’m sure there will be people reading between the lines. But for Marcia Clark and Christopher Darden, I’ve heard that it was always rumored, but it was never been confirmed. They were very close, certainly by the end of it.

TRAVOLTA: We certainly wanted them to. I mean, by the end of it, when you spend that much time together…

VANCE: [Clark and Darden] didn’t [have an affair]?

TRAVOLTA: No, they did. Well, that’s what I’ve heard, but I don’t know how far we explored it.

TRAVOLTA: Yeah. They definitely did.

VANCE: And we didn’t.

TRAVOLTA: But should have. [laughs]

VANCE: [laughs] But should have. 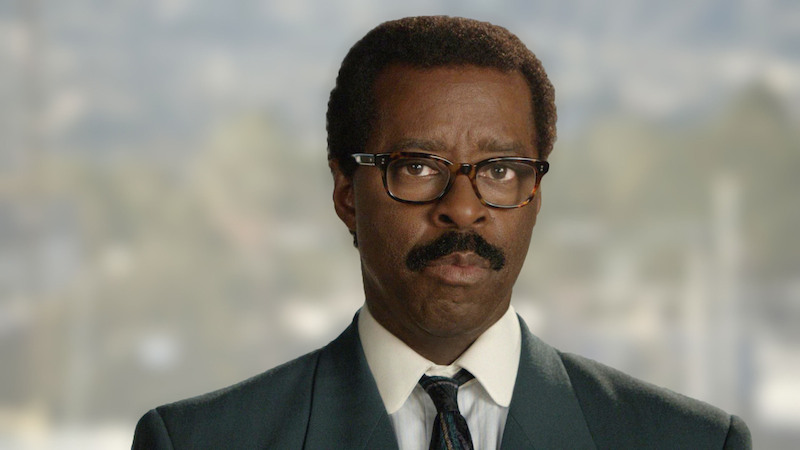 One thing that is really interesting about this is the behind-the-scenes look at what’s going on; the back and forth between your characters and the politics of the legal team. Was that fun to play?

TRAVOLTA: Yes, because, I’ll tell you why, and I haven’t said this yet. It was therapeutic for me because I have dealt, for 40 years, with the legal system — with lawsuits, with negotiations of contracts, with everything, and I feel like I’ve spent more time with lawyers than I have with anyone, so I feel like I was watching these people for years, and now I got to become them. It’s a cathartic thing to reverse the flow. Okay, I had to watch you guys do this, now I get to act this out, and to some degree, it was therapeutic.

VANCE: You actually have all the controls. You can manipulate.

TRAVOLTA: Oh, baby. And I had all those memories in my back pocket, and whenever I thought, “What do I do here?” I would remember some lawyer said this to me.

TRAVOLTA: I had a tool box. [laughs]

In the end, ultimately, what do you both hope people get out of watching the whole series?

VANCE: In my mind, the reason to do something this huge, to revisit it on the twentieth anniversary, is that, based on all the things that are happening today — with Ferguson and Chicago and the young lady [Sandra Bland] who didn’t make a turn signal and was pulled over — to get us talking about it. Obviously, there’s a disconnect somewhere, with the police departments, with each other. The idea of the melting pot is very real, but the reality is not, and attention needs to be paid.

TRAVOLTA: It’s still relevant, so it will always create talk, communication and maybe enlightenment on some level because there are multiple messages: Yes, there’s the race issue, but there’s also legal and judicial, celebrity, 24-hour news, Big Brother; it’s 1984 and every move we make is clocked. There are a lot of things to talk about in this.

READ MORE: David Schwimmer on ‘The People v. O.J. Simpson,’ Why Robert Kardashian Believed O.J. and the Dangers of Fame