Review: 'The Triumph 2016 Election Special' is The Political Coverage This Presidential Campaign Deserves 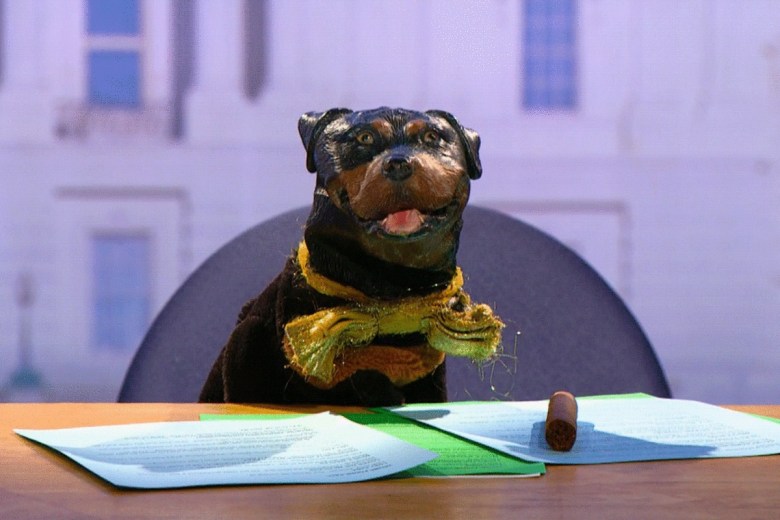 While Indiewire is not a political site, an election year means that politics seep into every aspect of our lives, most especially our popular culture. This year, the field of candidates maybe has us wishing there was some sort of safe place — a refuge from the madness. Such a place may not exist, so here’s the next best thing: a crude, brutal takedown of the candidates and culture surrounding this year’s campaign starring a rubber dog puppet.

For those not familiar with Robert Smigel’s most famous creation (okay, maybe second-most-famous, thanks to The Ambiguously Gay Duo), Triumph is an insult comic in the grand tradition of Don Rickles and the like. He also happens to be a rubber dog puppet with a cigar clamped in his mouth.

Triumph the Insult Comic Dog’s bread and butter is venturing out into the world and talking with real people, so “The Triumph 2016 Election Special,” produced by Funny or Die and distributed via Hulu, consists largely of field packages featuring Triumph barging into events like the spin room of a Democratic debate and Republican campaign events in New Hampshire. There’s also a segment devoted to uncovering just what an average voter might believe, if they hear it from a prototypical Fox News lady reporter, and some one-on-one time with former Governor Mike Huckabee, in which he proves relatively game to receiving trash-talking advice from one of the masters.

The puppetry isn’t great, the puppet itself has seen better days (when Smigel brought Triumph to the TCA Summer Press Tour last year, he stashed him in a plastic Old Navy bag because “it’s really all he deserves”) and the overall effect is crude and often incredibly hilarious, due to the absurdity of the image, coupled with some truly brutal jabs by Smigel (always just off-screen, with his hand up Triumph’s butt).

Let’s be clear: Triumph is a dick, and some of the blows he lands are pretty low. One field segment of the special is devoted to “prepping” a diner for an upcoming visit by New Jersey governor Chris Christie, who (if you weren’t aware) happens to be pretty heavyset. This means basically several straight minutes of fat jokes with very little sophistication or depth to them, and it was far from even the first time that Christie’s weight was mocked.

That said, when Triumph lands a joke, he really lands a joke. Just a couple of one-liners from the special:

*Observing a crowd of Trump supporters: “A page out of history — specifically Germany, 1934.”

*Upon confusing Ted Cruz and Mario Rubio: “I knew I was racist enough to be a Republican!”

*To a Trump fan: “When you watched the movie ‘Philadelphia,’ did you cheer for the AIDS?”

Anchoring the 85-minute special are studio segments filmed in front of a live audience (which also provides some welcome laughter to the pre-taped segments), including an absurd panel discussion with a range of guests from Alan Dershowitz to Sanjaya from “American Idol.”

What’s intriguing about the “Triumph” special is that it does something I can’t recall seeing achieved all that often in this medium. While the mix of political commentary combined with covering actual events on the campaign trail might lead you to believe that there’s an expiration date on this, instead, Smigel has created something that feels timely and relevant on the level of, say, a new episode of “The Daily Show,” while also feeling evergreen enough to engage viewers for at least several more weeks.

Over the last week, I’ve been trying to write this review, and as I’ve worked on it I’ve observed, every day, someone new on social media or in real life, announcing that they’ve just gotten to watch it for the first time — and loved it. The only element that may feel dated by the end of the primary season is the emphasis on candidates who have now dropped out of the race, and even then they’re still part of the conversation.

Like any project of this nature, some parts land better than others, but for those whose frustration with how this campaign is shaping up, “Triumph” proves incredibly comforting. At the very least, watching political operatives do their best to take Triumph seriously — even when confronted by some pretty ridiculous zingers — makes this election feel just a little less terrifying; at least for a little bit.

“The Triumph 2016 Election Special” is now streaming on Hulu.

READ MORE: What Time Is the Right Time For Watching Late Night TV?