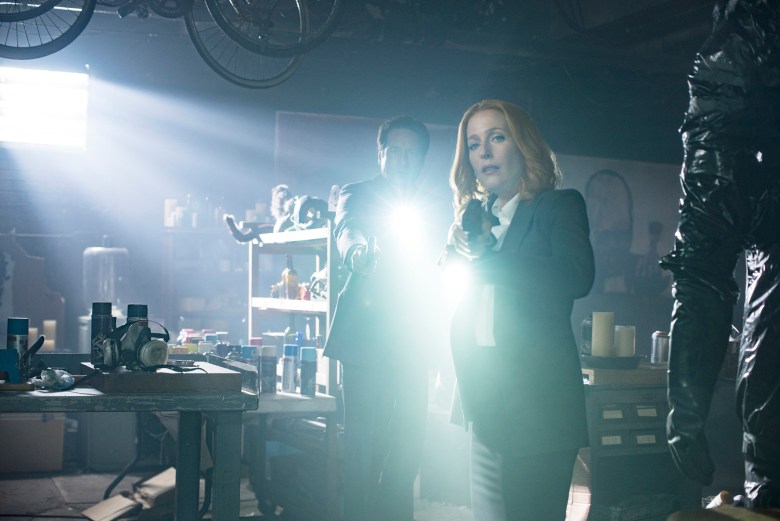 Mulder and Scully are FBI agents investigating weird crimes. About 14 years ago, they had a son that Scully gave up for adoption (to keep him safe from the crazy alien conspiracy that might still be trying to take over the world).

LAST WEEK’S REVIEW: ‘The X-Files’ Season 10 Episode 3, ‘Mulder and Scully Meet The Were-monster’ Is A Treat to Be Treasured

Mulder and Scully head to Philadelphia to investigate the death of a city official who was mysteriously ripped apart in his office by a very tall and ominous figure. More deaths follow, all of them being people who are exploiting or abusing homeless people in some manner. Mulder and Scully eventually track down an artist who claims that he’s created “the bandaid nose man,” whose murderous rampage to protect the indigent he says was made possible by Tibetan Buddhism. At the end, the Trashman puts a happy face on the statue representing the Bandaid Nose Man, seemingly ending the killing spree.

The real news, though, is that during their initial investigation of the crime scene, Scully gets a call from her brother. (By the way, the iPhone screen fakeout reading “William,” suggesting at first that Scully was getting a call from her son? Mean.) Scully rushes to the hospital where her mother lies in a coma after suffering a heart attack. Ma Scully’s living will dictates that she should be taken off life support, and while she wakes up briefly (telling Mulder, “My son’s name is William, too”), she passes away soon after. Between her grief over her mother and her uncertainty over whether or not William’s adoption was the right choice, Scully is torn apart by the lack of answers. But Mulder sits by her side.

Scully’s mom died. It was sad. A trash Golem murdered a bunch of not-great people. Mulder and Scully hugged some and talked about the baby they gave up for adoption. Again, it was sad.

Did Glen Morgan and James Wong have a bet going as to who could make the grossest “X-Files” episode of the new season? If so, we have to say that the prize goes to Wong and his episode “Founder’s Mutation,” for that laboratory full of horrifying genetic disorders. But Glen Morgan did not hesitate to make the dismemberment of Trash Man’s victims as gruesome as possible. Oh, and also, that bandaid Mulder stepped on? Ew.

The death of a parent is hardly a sexy time, and neither is this particularly gross and grisly case. But while Mulder and Scully did get some hugs in during the second half of this episode, there perhaps could have been more of that?

Also, when Scully hangs up the phone and tells Mulder that her mother is in the hospital, Duchovny and Anderson proceed to engage in some of the most awkward uncomfortable touching of all time. Which fits the scene and the moment, but it caught our attention, given how natural the pair are together normally.

For longtime “X-Files” fans, an already emotional episode got an extra jolt of feels thanks to some significant implementation of flashbacks to the show’s original run. This includes a quick reminder of the time Mulder seemingly willed Scully to recover from her post-abduction coma, as well as an extended look back at Scully’s pregnancy and brief time as a mother.

In addition, there’s a key bit of casting: One of the very best things to come from these sorts of revival series is the fact that for so many of them, the producers have been able to assemble as much of the original cast as humanly possible. Since the timeline of “The X-Files” has kept relatively close to the actual years that have passed since the show’s premiere, that means we’ve gotten to see everyone age in what’s close to real time; making it all the more emotionally affecting that Sheila Larkin, who made many appearances over the course of the original series as Margaret Scully, came back for one last goodbye. Seeing Mrs. Scully reunited with her daughter, albeit briefly, hit even harder as a result, while reminding us just how far back this show’s legacy goes.

[Editor’s Note: Steve Greene (pictured below) should likely be considered Indiewire’s true Sportsing Expert, given his official capacity as such.]

Okay, first off: Alessandro Juliani is another beloved Vancouver sci-fi face, most notably having played a prominent role in “Battlestar Galactica.” Too bad he couldn’t stick around, but he should have known better than to be a character introduced in the cold open of an “X-Files” episode.

Plus, it’s always a pleasure to see another appearance of Lariat Rent-A-Cars, the fictional rental car company that is also seen operating in “Breaking Bad,” “Supernatural” and “Veronica Mars.” That’s right. All four of these shows take place in the same universe!

But here’s the huge thing for longtime fans: WE HEAR THE VOICE OF CHARLIE SCULLY. As early as Season 1, it was established that Scully had three siblings: an older brother (Bill Jr.), an older sister (Melissa) and a younger brother (Charlie). While the former two both made prominent appearances during the course of the series, very few details were ever provided about Charlie Scully, beyond the fact that he at one point was born. We don’t get much more about Charlie in “Home Again,” technically, but at least we discover that he actually does exist and that he’s been estranged from his mother (and seemingly the rest of the family) for quite some time. Of all the mysteries we ever expected the show to explore, this one was pretty low down on the list.

There’s not a ton to nitpick here, but Scully’s litany of questions that she wishes she could ask her mother is a bit clunky for what is otherwise a beautifully acted scene. Contrast that to an earlier moment, when Scully watches a neighboring patient’s body be collected by the hospital orderlies while speaking with her brother — it’s quiet in its heartbreaking simplicity, while also nicely setting up her later breakdown.

“You’re a dark wizard, Mulder.”
“What else is new?”
– Scully and Mulder

In an episode full of intimate moments, maybe the most striking was when Mulder and Scully discussed the time she spent in the void between life and death, and how he brought her back. Sitting feet apart, they were more connected than we’ve seen them so far this whole season.

Somebody showed up to do some acting today, and that person’s name is Gillian Anderson. Grieving the death of a parent is tricky material because it’s easy to go over the top with it, but Anderson (never a disappointment) stays grounded, raw and real.

“Home Again” also features some beautiful parallels to the first season episode “Beyond the Sea,” also written by Glen Morgan (in partnership with James Wong). Scully’s father dies of a heart attack (that’s right, Glen Morgan killed Scully’s mom and her dad) and Scully’s immediate reaction is to dive right back into the serial killer case she and Mulder are investigating. Over twenty years later, it’s all too in-character that she’d demand they return to the case right after the death of her mother.

On balance, the attempt to connect Scully’s grief over her mother and son with the Trashman case got a bit too heavy-handed, with the parallels being drawn ultimately, on balance, feeling forced. But the subtle moments really worked this week, and truly this felt like what we look for when we watch “The X-Files” — the paranormal co-existing with the intimate truths of these characters’ lives.

(With maybe some gross stuff and hugs as a bonus.)

READ MORE: The 12 Most Important Things Chris Carter Told Us About ‘The X-Files’ Revival