There's a New Version of Michael Mann's 'Blackhat,' and It's Really Different 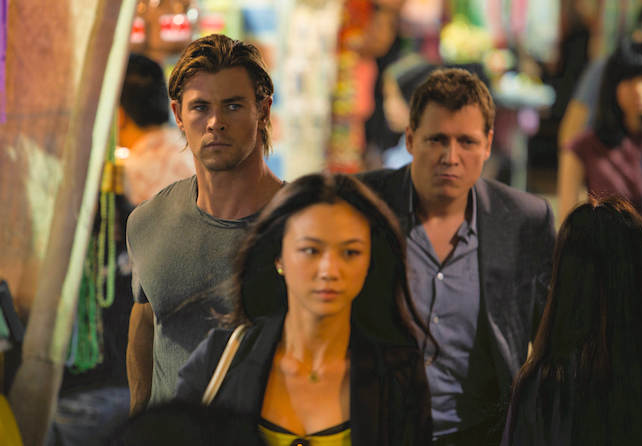 In a terse introduction, Michael Mann described the new cut of “Blackhat” that premiered last night at the Brooklyn Academy of Music as “quite different.” From the first shot of papers wafting across the floor of the Chicago Mercantile Exchange, it was clear he wasn’t overstating the case. I went from wondering if I should be taking notes to scribbling furiously in a matter of seconds.

That shot, and the sequence that follows it, doesn’t turn up until almost 15 minutes into the theatrical cut, and it heralded a major restructuring — or perhaps that should be unrestructuring, since it involved returning the nuclear power-plant meltdown that opens the theatrical cut to the middle of the film where it originally belonged. (There are no currently announced plans to release the new cut on video, and given that Mann, who was sitting directly in front of me at the screening, was taking his own notes on the cut, he’s very likely not done tinkering with it. Update: Isaac Butler has a two-part recap of Ebiri’s on-stage interview, in which Mann said there are no current plans to release to revised cut to home video. Sorry.) If you know that Mann moved up the reactor sequence late in post production, some of the theatrical cut’s eccentricities are more easily explained, especially the horrendous dubbing in a scene where Chinese officials discuss the evil hacker’s sabotage; it turns out they were originally talking about him running up soy futures at the CME, and Mann simply inserted new dialogue in their mouths, perhaps assuming non-Mandarian-speaking audiences would be too busy reading subtitles to notice. It also accounts for why, when muscular good-guy hacker Nicolas Hathaway (Chris Hemsworth) and crew finally turn up at the power plant in the theatrical cut, it seems like almost no time has passed since the accident; in the “revised cut,” as Mann called it, the two sequences are one continuous piece.

Apart from that major transposition, most of the differences in the revised version are minor: There are a couple of new scenes, including one on a Dutch freighter that explains how the bad hacker was able to manipulate the price of soy, and an earlier, more substantial introduction for Viola Davis’ FBI agent. But most of the changes are nips and tucks, a line taken out here or added there, subtly shifting the balance away from Hemsworth’s character and towards the ensemble around him. Mann also reworks the score and smooths out the theatrical version’s uneven sound mix, in which successive lines sometimes sound like they were recorded in entirely different rooms, but he adds new inconsistencies: In a scene that begins with Davis flying through the door of a hotel room, he adds a line of innocuous dialogue that doesn’t even come close to matching up with her unmoving mouth. It arguably takes us into the conversation that follows a hair more smoothly, but at the price of jolting us violently out of the film as well. After two cuts, you have to conclude those jolts are part of what “Blackhat” is going for.

“Blackhat’s” detractors attacked the film as an indulgent, unforgivably sloppy mess, but its sometimes haphazard disjunctures are so frequent that you almost have to take them as a motif. It’s like a movie that’s being hacked from the inside, taken apart and reassembled as you’re watching it. (It’s like a big-budget version of Claire Denis’ “The Intruder,” which feels like one movie trying to break through the surface of another — a white elephant being eaten by termites.) As if to clear up the question of directorial intent, the new cut doubles down on some of the theatrical version’s eccentricities. The aerial shot of the reactor that appears in a TV news report with a “STOCK FOOTAGE” stamp still on it is echoed by a shot of CNN B-roll overlaid with a Getty Images watermark, shutting down the notion that a piece of uncleared footage somehow made it into a $100 million studio movie unnoticed. Same with the moment where the movie’s soundtrack abruptly cuts out and swoops back in like an LP coming up to speed; it now happens twice instead of once.

Mann’s new cut loses my favorite moment from the theatrical version, when Hemsworth’s character starts relating his sad family backstory in a moment of postcoital intimacy and Mann fades out the sound and cuts away; you get the picture, and we don’t need to listen to him natter on about how his daddy didn’t love him. And a lot of its jarring aspects remain, from the weird disjunctures between dialogue and background sound to Mann’s overwhelming embrace of macho mythologizing. That Hemsworth’s hacker is a buff stud is vaguely explained by his prison workout regimen, but how is it that he’s a crack shot with a pistol? And why is it that when the film’s male heroes pull out guns, every shot hits home with a phallic boom, where Davis’s attempt to join in — let’s just say it doesn’t go as well? (That’s not to mention the film’s climax, which consists of two white men facing off in a crowd of Indonesians and literally throwing brown people out of the way to get at each other; it’s so blatant, it feels like it has to be a critique, but there’s no self-aware acknowledgement, let alone follow-through.) Davis and Tang Wei, as Hemsworth’s love interest-slash-fellow computer ace, both give great performances, but they’re great in part because of how far they expand beyond the script’s extraordinarily limited visions of their characters. At this point in Mann’s career, there’s no point in expecting the leopard to change his spots, but it’s not surprising the sold-out audience for the “Blackhat” screening was upwards of 90 percent male.

Although it’s a slightly smoother ride than the theatrical version, “Blackhat’s” revised cut isn’t likely to win the movie any new converts; as Mann told Vulture’s Bilge Ebiri, who’s interviewing him on stage at BAM tonight, “It’s still ‘Blackhat.'” But in any version, it’s a movie that benefits from rewatching. Once you’re discharged from the responsibilities of plot, it’s easier to savor its details, especially the way Mann pays special attention to the act of people thinking on screen. There’s so much space and time devoted to silent nods, to unspoken communication and body language, the kinds of things that can’t be reduced to the “ones and zeroes” the movie finally rails against. Especially at last night’s screening, which Mann spent two hours beforehand adjusting to his exacting technical specifications, “Blackhat” can be an extraordinarily loud movie: I was waiting for one surprise explosion late in the film, and the shock of its volume still knocked me out of my seat. But it’s also, at times, an extraordinarily quiet one, enough to make you hold your breath waiting for what comes next.

New cut is an improvement, for sure. Opening on the floor of the empty exchange (instead of the God’s eye view of the world + reactor)…>

> restores/amplifies a key theme of the world running on its own, computers/machines doing everything, people at its mercy. >

> That also connects to the film’s main visual motif, of repeated patterns/grids everywhere, which our heroes have to run against. >

Additionally, the more steady build-up seems to give the supporting cast more of a chance to shine. Feels more like teamwork, now. >

> Original cut opened with a big boom, then de-escalated from there, which was its own thing, but this version makes more dramatic sense. >

> A few nips & tucks here and there also help quite a bit. We see a bit more of what Tang Wei’s character does. But less backstory now. >

> One thing that did bother me a lot w/ original cut was how when they returned to the reactor midway, it was like no time had passed. >

>…will suddenly start liking it now. As Mann said the other day, “It’s still BLACKHAT.”

Next to BLADE RUNNER: The Final Cut this is the most drastic and drastic improvement in a recut I’ve seen

Now that its structure has been restored, it’s obvious why the studio was freaking out: BLACKHAT is a thriller about a spike in soy futures.

BLACKHAT DC is outstanding. Hones the structure into an ever-escalating fever dream as opposed to a disjointed global thriller. Also LOUD AF