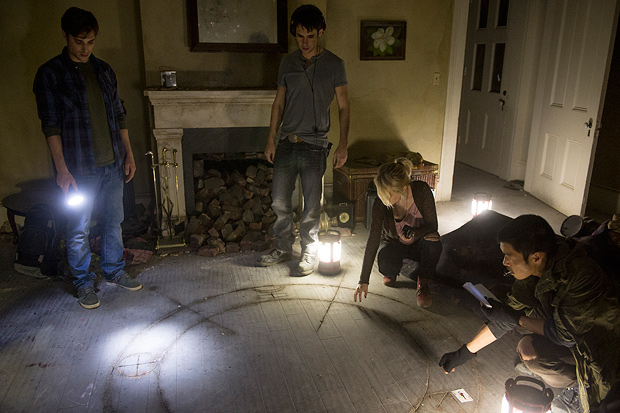 Max La Bella has the same story that most aspiring filmmakers have. He grew up loving movies and building worlds out of LEGOs before realizing that he could be the one to make cinematic universes for others to play in, eventually cruising off to film school to chase his dream job.

“I was obsessed with anything that let me leave my own world,” he recently told Indiewire. La Bella speaks with the triple espresso shot enthusiasm that belies a dash of nervous energy when confronting the topic at hand. That topic, put bluntly, is the failure of success.

During film school, La Bella got a zombie TV show pilot into the hands of indie director Steven C. Miller (“Silent Night,” “Extraction”), who put him in contact with James Wan, just as the new horror icon was a few years from transitioning firmly from “Saw” to “Insidious” in the late 2000s. Wan liked La Bella’s work, and La Bella dropped his entire life in Orlando to move to Los Angeles with $2,500. “I threw away everything I owned. In retrospect, it was the dumbest idea ever. The money was half gone by the time I got there, obviously,” La Bella said.

This is still the same story that belongs to several aspiring filmmakers. The fortunate ones, at least. They get someone established to believe in them, they score a mentor and sincerely underestimate the cost of rent in L.A. Most learn that last lesson before they ever call for a U-Haul, but La Bella had a leg up. A working filmmaker who’d built a bloody mint was on his side, and the man who re-popularized creepy puppets soon had an idea that he wanted La Bella to write. It involved a cop, a psychologist and a group of people murdered while trying to summon spirits from beyond.

“So, he sent me the synopsis to ‘Demonic,'” La Bella remembered. “At the time, I was working as a PA on ‘Criss Angel Mindfreak,’ James asked how much I got paid a week, and I told him. He said, ‘I’ll pay you to quit your job if you want to write this movie.’ I was like, ‘Holy shit!’ It’s the best thing that’s ever happened. What he did for me. He gave me such a chance.”

Wan was prepping to show ‘Insidious’ at Toronto, so La Bella cranked out a draft of “Demonic” in two weeks to give them the option to sell it at the festival, and everything got real, really fast.

“I didn’t have reps or a manager, and I was clueless,” La Bella said. “The movie was announced in a Variety article, and my name made the front page, and as soon as my name was on the cover, there were 7 managers that reached out to me the next day.”

It was all happening. The thing that every aspiring writer spends time dreaming about (when they should be writing) was coming true. That’s when everything started falling apart.

More than five years later, “Demonic” hasn’t hit theaters. La Bella recently posted a lengthy blog entry titled “The Downside of Up,” chronicling the aggravating ups and downs of the project — including two false starts, losing a director the day before shooting was supposed to commence, an abandoned release date plan meant to avoid a larger film (that ironically ended up not being released either) and a final kiss of domestic death in the form of a foreign release that got “Demonic” onto pirating sites within hours. It became an extended lesson in the high price of staying excited about what you love to do.

Filmmakers rarely talk about their failures, which is largely why La Bella’s screed is so fascinating. It’s also what makes it such a valuable lesson to those aspiring screenwriters and directors who think of getting an agent as crossing the finish line, the blissful delusion that getting past the gatekeepers is the ultimate goal. It’s important that La Bella shared a common story that isn’t commonly shared — his dream job didn’t morph into a nightmare so much as it got replaced by the day-to-day standard operating procedure of mini- and major studio filmmaking.

Outside of Michael Bay apologizing for the last “Transformers” movie while marketing the latest “Transformers” movie, filmmakers normally recognize and play to Hollywood’s obsession with strength. Wins beget opportunities, so projecting weakness and vulnerability seems a sure way to prove a human lack of confidence in an industry marked by bravado and finely coiffed ego. Tom McCarthy recently discussing what he learned from the critical devastation of “The Cobbler” that emerged as he shot “Spotlight” seems like a unicorn whose existence is probably only possible because of the golden safety net of Oscar love.

What he did, openly, is simply not done.

While McCarthy was already firmly established on the shaky ground of Hollywood (and, in fact, in the process of making the movie that would go on to win best picture), La Bella was in the newcomer crucible. He did a few re-writes but struggled to get writing work where most of his opportunities came in the form of cattle calls for horror remakes. After losing its director on the eve of filming, “Demonic” needed another year before finding a replacement and re-organizing a shoot in Louisiana where La Bella experienced the pinnacle of the process.

“You wrote something, and you’re in the house that you wrote,” he said. “People spent millions of dollars to build this, and you started it. It’s the craziest thing. I’m standing in this haunted house that I wrote in a shitty apartment in West Hollywood.”

Of course, all of this came years after he wrote the initial script and experienced the uncertain, temporary wins of the development process. It’s — as the cliche goes — a miracle that movies get made at all, but La Bella’s experience showcases the intimate, fragile response to that tumult. He remarks with trepidation the series of conversations he had with family and friends back home. “My mom knows who Harvey Weinstein is. I could tell my mom that I haven’t been full of shit this whole time.” The good news was always haunted by months of waiting and follow-up phone calls to break bad news and reversals. “I think that’s what hurt the most in all of this,” La Bella said.

Meanwhile, La Bella decided to quit his day job doing post-production work for Adult Swim shows. He was going on general pitch sessions, pitching ideas every week, working 9am-8pm and then writing until two in the morning. Exhausted after three years of doing that, something had to give.

“It was another foolish move, but it worked out. I haven’t had a day job since. I didn’t get another writing job during that whole time,” he said.

While marveling at the real-life fictional haunted house of his imagination on the “Demonic” set, he finally landed a sale to Skydance, an untitled horror project featuring imaginary friends that came through a month after quitting his day job. “I was so lucky,” La Bella said. “It carried me for another year of my career.”

That’s the rough happiness to all of this: Being thrilled at grabbing hold of a slippery, short-term lifeline. La Bella was on another high, and he’d ride it through to more mercurial great news about “Demonic.” He was in an elevator in an older building in downtown Los Angeles (“I don’t know why I remember this, but there was really weird lighting”) when the Weinstein Company announced a wide release for “Demonic” in December 2014.

“We were thinking 500 screens, there wasn’t a date set, and then we get this. Bob made the decision overnight and the release was out the next day. I got a message saying, ‘2,500 screens, Oscar counter programming, get excited,'” La Bella said.

With a few weeks until trailers would announce a marketing campaign kickoff, concerns that Sony’s “The Interview” would injure “Demonic”‘s potential saw the release plans scrapped. “The Interview,” of course, was eventually pulled by Sony after their infamous data leak led to bizarre North Korean threats. The movie that delayed “Demonic” didn’t come out. The weekend was free. It was a final cosmic gut punch on the downhill slide toward La Bella’s movie being shelved.

“All of my friends and family were excited, putting it on their calendars, and I have to come back with my tail between my legs. Once again,” La Bella remembered. “I guess I was foolish for being happy. Everyone tells me I shouldn’t have been so excited, but the wide release news was that moment of validation. You’re getting the good news you deserve. You’re getting a wide release because you went through all that shit. That’s what I thought at the time.”

Now, La Bella doesn’t even have a copy of his own movie: “It’s on Torrents now, but I have nothing.”

Still, he recognizes his initial naivety and has learned immensely from the process — recognizing in particular that getting a movie made is almost always this harrowing. No dream, no nightmare, just a working reality.

“I get how much of a business this is. I’m not mad at the Weinsteins. I know it’s just a numbers game. It has to be because it’s the only way for these production companies to survive. It still fucking sucks,” he said. “I wrote the whole article furious, and that turn toward hope came about while writing it. I wanted to write my angry piece, but then I realized that maybe I do have hope. If I didn’t have hope, why am I still writing? I’m still doing it. I’m still here.”

After an hour of reliving the rocky road of disappointments, we asked if he still considers screenwriting a dream job. He sighed.

“Yeah. The definition of dream job has certainly changed. It’s still a job. That’s the one thing I wish they’d told me before I started all of this,” La Bella said. “You think, ‘James Wan paid me to write a script. It’s all candy from here. I did it!’ Every step of the way tells you, no, you haven’t done it. I know it’s never gonna get easier.”

He continued, “I know writers in huge places who still face these exact problems, and why I wrote the article was to tell others that it’s okay. So many writers have no concept that it’s gonna be difficult. But you’re strong enough to move on. It’s the only thing you can do. Even if you get kicked down, still keep hope somewhere deep down inside you.”

Check out the latest from Indiewire Video below.

This Article is related to: Toolkit and tagged Interview, Screenwriters, Toolkit