Review: 'Archer' Season 7 Episode 1 'The Figgis Agency' Kicks Off With a Bang — And a Body 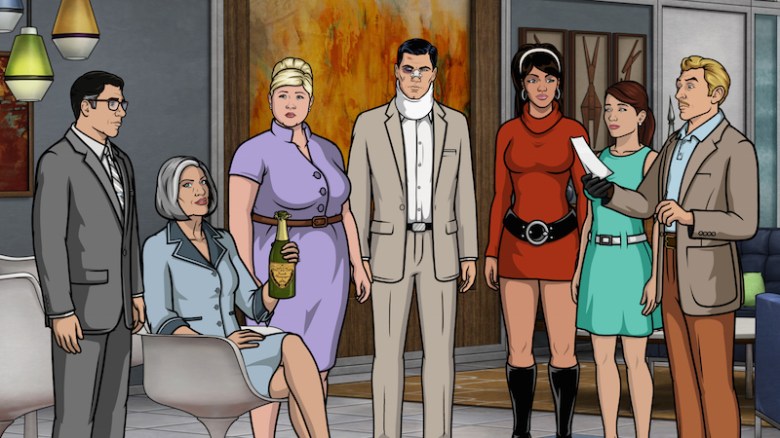 The majority of the episode consisted of the gang’s first mission for The Figgis Agency, a private investigation firm in Los Angeles set up by Cyril (because he’s the only one who could qualify for a license in California, a fact that irks Archer to a predictably high degree), after the former secret agents were blacklisted from the spy game because they failed last year’s last chance mission, “Drastic Voyage.” Now they’ve been hired by a woman identifying herself as the famous starlet Veronica Dean, so Archer, Lana and Ray infiltrate a mansion in the Hollywood Hills to steal a tape containing “sensitive information” that Ms. Dean doesn’t want to fall into the wrong hands.

The only problem — other than Archer getting chewed up by guard dogs during the burglary and home invasion (they did, after all, run into a few occupants) — is the wrong hands are those belonging to the mysterious woman who hired them. The real Veronica Dean shows up at episode’s end to request the same service they just completed, since she doesn’t know they’re the ones who just robbed her in the first place. Safe to say The Figgis Agency isn’t off to the best of starts.

And yet the real mystery of the episode arrived in the first few minutes, as two detectives (voiced by J.K. Simmons and Keegan-Michael Key) debate how a dead body ended up face first floating in Veronica Dean’s pool. Who’s the vic? Archer himself! Dun-dun-dun!

Archer: “Oh, please. The only thing you eat is cocktail onions.”

Not a whole lot of drinking went down in the premiere, but Archer’s spot-on put-down of his mother (though can it be an insult when it’s mostly true?) would have taken the cake anyway. There were lots of sneaky lines serving as treats for the attentive this week, reminding everyone to listen closely in the coming weeks.

Every animated series created after 1989 has to, at some point, pay homage to “The Simpsons,” and it sure felt like “Archer” chose to do so this week. Though it’s far from the first time the series has executed a scene with an extended tumble down a mountain, Archer’s bouncing body invoked memories of Homer’s historic trip down the Springfield gorge. Of course, the highly-talented animation team made Archer’s journey far more beautiful than Papa Simpson’s, framing it behind the beautiful backdrop of the L.A. skyline and incorporating some pretty hilarious sound effects. Still, who knows what this would have looked like without the glorious precedent set by James L. Brooks.

Krieger: “And since the front of the house by the road is guarded 24/7, you’re going to have to go in…from the rear.”
[expectant pause]
Archer: “No, you all took it for granted.”

Pam: “I gotta go get my car smogged!”
Mallory: “What river? It’s a concrete slab.”

With the gang’s move to the West Coast, we thought it approps to add a section devoted to the humor specific to Los Angeles. After all, the city you either love to live in or love to hate has many eccentricities the sharp minds behind “Archer” will undoubtedly comment on throughout the season, and they didn’t waste any time in episode one. Among the many references, Mallory’s excitement over being able to buy liquor in the grocery store was so good we made it the section’s title, but we’ve also chosen to highlight Pam’s first post-move priority and Mallory’s accurate assessment of the L.A. river.

Bonus: The art Lana criticizes while Ray breaks into the safe — that she “doesn’t get at all” — looks a lot like a piece by Gedi Sibony. He’s a New York-born artist, though, and while he’s had a number of exhibits in Los Angeles, most of his work is permanently housed in other cities. Though, to be fair, his “installations” do look pretentious enough to invoke Los Angeles sensibilities.

We can’t give credit to Krieger for creating the rocket-propelled grappling hook, since, as Cyril pointed out, he didn’t invent it. Nor can we offer up props for the thermal lance, made to crack into the safe, because it’s from “Thief.” So we’ll have to settle for the punnily perfect name given to doggie knockout treats: hush puppies. It’s certainly not the first time either the drugs or name were used, but credit to Krieger for getting to the name before Archer could.

“You shot a black astronaut. That’s like killing a unicorn!” (Best Quote)

With so much change going on in the “Archer” universe, it’s nice to know some things stay the same. Namely, Archer himself. The man with more lives than nine cats has always found a way to blame the most literal thing possible for his many, many accidents — be it gravity, the jungle, winter or specific people — even though they’re hardly the ones to blame for his pain. Usually, it’s his fault, as it was here when he fell down a cliff after being attacked by guard dogs he should have been on the lookout for from the get go. Never change, Archer, you magnificent, immortal bastard (we hope).

That being said, I’m also pretty partial to this snippet from Archer’s exchange with Ray, which is brand new: “Okay, a) I’m pretty sure chickens give live birth, like sharks.” God bless his unpredictably random mind.

“Archer’s” never shied away from serialized narratives, but this feels like a bigger step in that direction.

It is a little more serialized this season. We finish up this season where we start in Episode 1. I guess the opening scene actually is the closing scene of the season and it’s the first time we’ve done that. So that was new and interesting and a bit nerve-wracking, to know that eventually the story needed to come back to square one. I’ve never done that before.

Did you know how you were going to get there when you wrote it?

Instinctually, the fact that Reed didn’t have an ending in mind when he started the season with Archer’s dead body floating in a pool indicates he never planned on actually killing his lead character. And indeed, even after introducing the idea of Archer’s mortality at the end of Season 6, it seems like a pretty preposterous notion that Reed would kill off not only the titular character of a series he wants to “keep going for a long, long time,” but the driving force of the narrative itself.

Still, one has to wonder, with all the changes happening in “Archer” over the last few years, if perhaps Reed will actually go there. He could have spent the time it took writing out the rest of Season 7 to determine how “Archer” could move forward without Archer, perhaps by bringing in a new character at season’s end or shifting focus to an existing one. Do I expect that to happen? Not really, but the inventive spirit of this brave series has to make you think twice about the possibility.