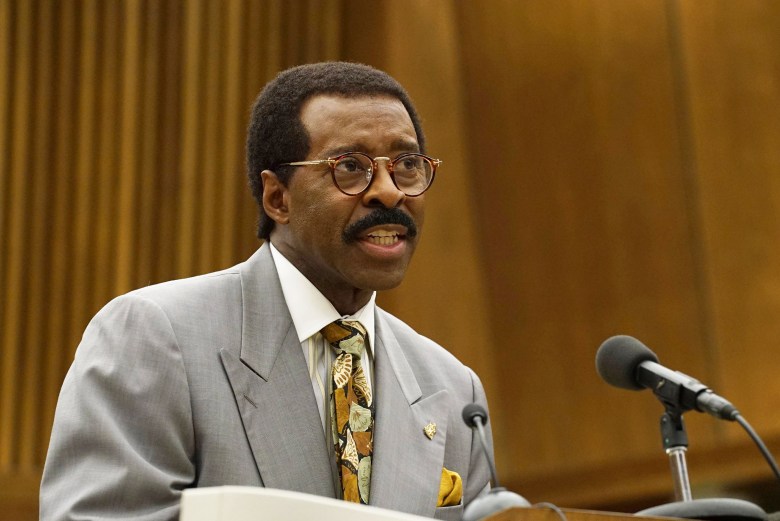 The big issue before “American Crime Story” today is that of the Mark Fuhrman tapes. First teased last week, we now get the full story: A while back, an aspiring screenwriter interviewed Fuhrman about life as a member of the LAPD, and he filled up 13 hours of tape with stories of police brutality and his own racist and sexist attitudes. The tapes, O.J. Simpson’s lawyers believe, will completely discredit Fuhrman… if they can get them admitted as evidence. The hurdles to that include getting a North Carolina court to honor a subpoena and getting Judge Ito to allow them to be presented to the jury. And that’s complicated by the fact that one of the tapes includes slurs Fuhrman hurled at Ito’s wife, an LAPD captain who reprimanded Fuhrman while he was under her command, but also signed a document when Ito took the case saying that she had no memory of interacting with him. (This would be the spousal conflict form from Episode 4, indicating this show is not afraid of the long game.)

Johnnie Cochran does everything he can to get the court of public opinion to affect the court’s official decision, going so far as to organize rallies which could trigger riots. But Ito rules to only allow two lines — 12 words — of the tapes (in which Fuhrman uses the N-word twice, countering his earlier testimony that he had never used the word once), which leaves Cochran shaking.

Christopher Darden and Marcia Clark, meanwhile, find themselves on the edge of getting a mistrial declared, but as much as Marcia says she might relish the chance at a do-over, they have to move forward. The two of them make peace over their major disagreements — Clark’s insistence on using Fuhrman despite Darden’s objections, and Darden’s decision to ignore Clark on the issue of the gloves. And at the end of the episode, there’s a bright spot: Marcia finds out she’s gotten primary custody of her two children.

Honest truth: We don’t want to have to pick this week because the full ensemble turned in stellar work. Courtney B. Vance uncovered for us the soul and depth that powers Cochran’s singular style, while Sterling K. Brown’s rage and frustration were as magnetic as Sarah Paulson’s quiet resignation to accepting her mistakes and moving forward. Heck, even John Travolta (a polarizing figure, to be sure) was at his most natural.

But while Ito’s earlier appearances might have rubbed us the wrong way, this week Kenneth Choi proved pretty impressive when it came to capturing the real emotional turmoil behind this situation. There’s a way to read his actions as self-serving, to be sure, but within the framework of the solid writing (by Scott Alexander & Larry Karaszewski) and directing (by Anthony Hemingway), the choices faced by Ito took on a sympathetic and human edge. One of the overriding themes of “People v. O.J. Simpson” is that everyone who came into contact with this case found their lives changed irrevocably — usually not for the better. Watching Ito this week (in comparison to his earlier gloating over fan mail from Arsenio Hall) highlighted that beautifully.

The biggest issue we had with “Manna From Heaven” was something that stands out a lot more following the time we spent last week getting to know the jury. But really, ever since the jury was seated, the delineation between courtroom scenes where they were present, versus scenes where they were not, has never been super-strong. And look, it’s not like we don’t know how this trial ends, but the importance of what the jury was shielded from during these proceedings gets undercut, when scenes don’t make a point of establishing whether or not they were absent.

This is a pretty minor nitpick, to be clear. But it does have an impact.

I Didn’t Know That…

…the Mark Fuhrman tapes were the result of (of all things) interviews he gave willingly to a writer. He wasn’t under any legal obligation. He chose to say those things to writer Laura McKinney. He was bragging, which only makes those tapes all the more brutal to hear, even in a recreation.

For the most part, “American Crime Story” has put a lot of time and energy into finding the humanity within these characters. Fuhrman is the one exception. Maybe that’s coming next week. Or maybe not.

The Most ’90s Moment

Opening with the opening sequence of long-running newsmagazine “A Current Affair” triggered some major flashbacks to that particular era of programming, which relished any angle to be found in covering this case. “A Current Affair” was canceled in 1996, and while we can’t find any hard evidence connecting that to the end of the Simpson trial, certainly it must have been tough for tabloid news in the immediate O.J. aftermath to find that same relevance.

For those wondering about the authenticity of the explosion that occurred between Darden, Cochran and Ito in court, the LA Times has a thorough transcript of the scene, many lines of which were used verbatim in tonight’s episode. When we tried to verify Marcia’s line, “Shall I take off my watch and jewelry?” we were only able to find this listing for a complete video collection of the trial, which credits the line to Marcia as occurring on DVD 48 of 200. That collection costs $2,000, which is a lot of money to verify one line. So we’ll trust Alexander and Karaszewski on this one.

“This is insane. You couldn’t get away with this twist in an airport paperback.”
– Dominic Dunne

The voice of the people, right here. Man, Robert Morse really makes the most of his limited screen time.

“This is what black people have always known and now it’s right here, for everyone to hear,” Cochran tells F. Lee Bailey after they read the transcripts of Fuhrman’s tapes. The 12 words that ultimately get submitted aren’t enough to bring down the LAPD, but while they are enough to prove that Fuhrman cannot be trusted and ensure Simpson’s freedom, Cochran’s quest is much bigger now than just one murder trial. His frustration isn’t over losing. It’s over the fact that the tapes represent the full depth of the LAPD’s racism and corruption, and Cochran wanted dearly to expose it. That moment not only anchors Cochran’s decisions to come, but reveals that Cochran’s not just a flashy suit and a grandiose courtroom manner. There’s real anger and passion driving him and justifiably so. Twenty years later, we’re still facing it.

Let’s be honest: Over the past season, there have been some moments of “American Crime Story” that were without a doubt entertaining, but could be defined as gimmicky. But this week, there are no baby Kardashians, no chase scenes set to the Beastie Boys, no courtroom collapses. This week finds the show as stripped down as it’s ever been, completely consumed by the legal battles in play, the emotions bubbling under the surface. And it might be the strongest episode we’ve seen in weeks, really trusting in this cast and this execution to drive home the impact of this week’s events. It’s true that as Darden observed, it does feel like things are ending. But we can’t wait for the finale, to see just how the pieces fall.