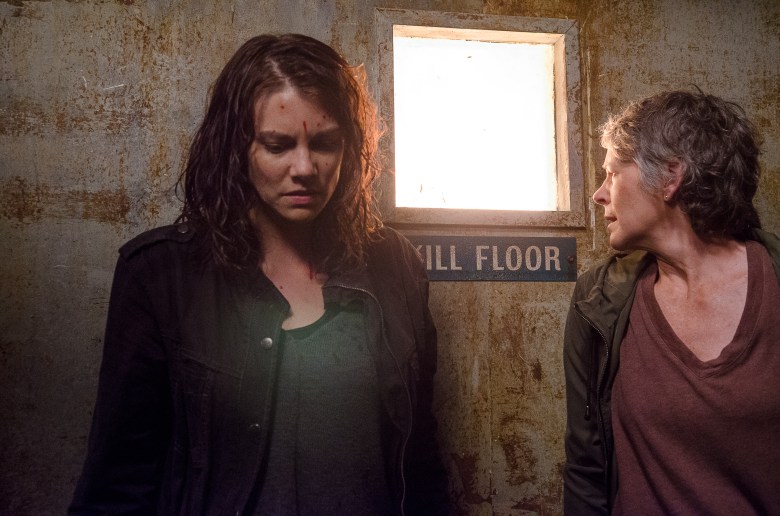 Carol and Maggie are the focus, since the entire episode is about their time as the Saviors’ captives. It’s another strong episode after last week’s season high-point, and a sort of thematic two-parter with that episode.

A Shred Of Humanity

While “Not Tomorrow Yet” suggested that the Saviors and the Ricketeers weren’t all that different, “The Same Boat” makes it explicit, as we get to know the group that captured Carol and Maggie. Particular attention is paid to Paula, played by the always welcome Alicia Witt, who is portrayed as a sort of Ghost of Christmas Future for Carol: a woman who kills remorselessly in order to survive and has no qualms about it. Still, she’s not a two-dimensional monster. She’s reasonable enough to keep Maggie and Carol alive to eventually make a deal for the Savior, Primo, that Rick and the others captured at the end of the last episode. Meanwhile, Maggie is interrogated by a Savior who was also pregnant. If this episode has a downside, it’s that the Saviors line up with Carol and Maggie a little too neatly, and a lot of the points here were made more efficiently last episode. But it’s still welcome to have antagonists that behave like rational people.

Even the group that attacked Daryl and the others back in  “No Way Out” are reassessed. When Carol cites the attack as the reason the Ricketeers struck the Saviors, one of the Saviors suggests that their group “probably put on a big show.” They certainly seemed willing to kill Sasha and Abraham, but that might not be the Saviors’ usual modus operandi. They could have been cruel outliers.

If Carol was feeling self-doubt about her killing before, this episode looks to give her a full-on complex. She genuinely doesn’t want to kill the Saviors, and when she and Maggie free themselves, she just wants to leave, but Maggie insists they finish the Saviors off. She even gives Paula the chance to run, but Paula stays to fight. Turns out it’s harder to murder someone if you have a long conversation with them first.

We’re getting close to the point (and honestly may have passed it this episode) where it’s difficult to root for the Ricketeers. Once they’re free, Maggie and Carol brutally murder the Saviors (including impaling poor Paula with a zombie who bites her face off), then lure Paula’s backup to their location and burn them alive. Neither of them seem particularly enthusiastic about the final bit, but they still do it. And when Rick and the others show up with Primo, he claims to be Negan, so Rick shoots him point-blank in the face.

Obviously, the show is establishing that Rick and the others are going too far, but in doing so it may be creating a situation that will be difficult to walk back from down the line. When the Ricketeers face their reckoning with Negan (who’s obviously still out there, even if you haven’t seen the casting news), it will be tough to say they didn’t bring it upon themselves. The Saviors certainly seem to view them as monsters, and the Ricketeers have given them plenty of reasons to believe so.

This is interesting new territory for the show to explore, but there’s most likely a limit on how far audience sympathy can go. There have been plenty of successful anti-hero shows, but that’s really not what “The Walking Dead” has been about, so I’m curious how the audience will react to these last few episodes. The show’s primary stance is usually “Rick is always right,” so a serious effort to undermine that might generate some kind of backlash. I personally think the show’s much stronger for approaching this material and hopefully, the audience agrees.

It’s not enough that Paula gets a huge bite taken out of her face on camera; we later see her zombified corpse. Y’know, without a face.

NOTE: This review was updated with the correct name for the character played by Alicia Witt.