Reviews: 'London Has Fallen' Is a Sequel That's More Like an Unneeded Remake 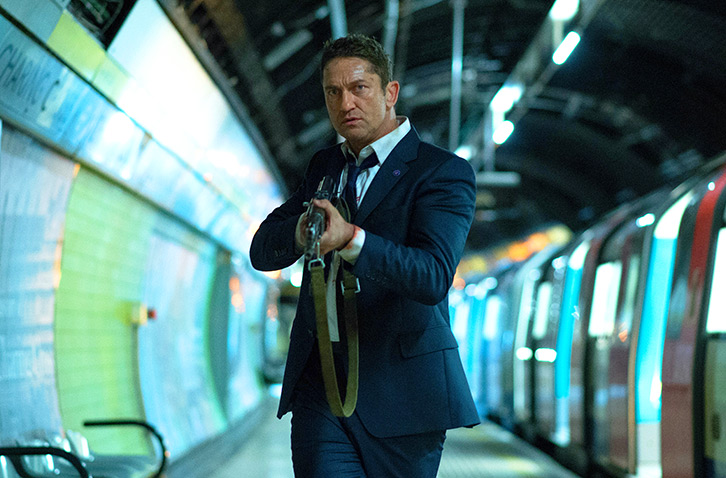 London has fallen, and so have critics’ expectations. That’s the takeaway from the reviews of the sequel to the White House-under-attack actioner “Olympus Has Fallen,” whose first reviews contain such pulse-quickening phrases as “competent” and “fast enough to keep you awake.” (Try slapping that on a poster.) By critical consent, 2013’s “White House Down” was the (far) superior of that year’s similarly premised entries, but “Olympus” made more money, so it’s Gerard Butler’s Secret Service Agent who re-ups to protect another world city in “London Has Fallen,” under the direction of Babak Najafi, whom you may remember from such previously underwhelming sequels as “Easy Money II.” Some reviews pan the film, whose regressive politics find Butler’s character telling an Arab terrorist to “go back to Fuckheadistan or wherever it is you’re from” — a particularly alarming sentiment in a week when a majority of Republican primary voters affirmed their support for a blanket ban on Muslims entering the United States. But few critics can muster the energy, effectively throwing up their hands and suggesting that if you like enjoyable trash like “Olympus Has Fallen,” you’ll like this one, too.

Reviews of “Olympus Has Fallen”

Is it insensitive to make a film about a city-wide terrorist attack at a time when people are genuinely scared of commuting to work? In the case of “London Has Fallen,” not really: mainly because this sequel to “Olympus Has Fallen” is so joyously ridiculous. “London Has Fallen” is laced with as many clichés as the original: the President mainly speaks in heartfelt speeches about looking out for the citizens of the United States and Butler, more a likeable lad-on-tour than a stern secret agent, has lines that span from “Nothing’s wrong, it bugs the hell out of me” to “Make those fuckers pay!” Still, if you embrace the movie’s “GI Joe”-style fun swagger, there’s novelty value in seeing London through the lens of a global action movie. It’s all so overly macho that it plays like a camp pleasure-cruise.

“Go back to Fuckheadistan,” growls Neanderthal Secret Service agent Mike Banning (Gerard Butler) as he knifes a faceless goon about halfway through the grab bag of dog-whistles and dog-shit filmmaking that is “London Has Fallen.” One of the cheapest looking $100 million movies ever made, this sequel to the 2013 sort-of-hit “Olympus Has Fallen” ditches the original’s “Die Hard in the White House” premise in favor of sub-“Death Wish 3” sadism and “Red Dawn”-esque survivalism, but without the notes of camp or jingoist pulp that could make either watchable. Instead, Swedish director Babak Najafi (“Easy Money: Hard To Kill”) has thrown together one of the worst action movies in recent memory, its signal achievement being a firefight that’s presented in a single take, but which still manages to be incomprehensible. Perhaps the movie’s politics — which range from tone deaf to irredeemable — would be more of an issue if it weren’t so inept.

Taking over for “Olympus” helmer Antoine Fuqua, director Babak Najafi competently stages his shootouts and hand-to-hand combat, the former chockablock with instances of Banning putting bullets in his opponents’ foreheads, and the latter often concluding with Banning’s knife being repeatedly being plunged into nameless foes’ necks and torsos. There’s a visceral forcefulness to his staging that does much to enliven what are rather standard-issue conflicts, highlighted by a prolonged single-take (seemingly enhanced by CG trickery) down a city street in which his camera maneuvers in and out of gunfire, twirling around to provide 360-degree views of the carnage. Though sloppier and more monotonous, “London Has Fallen” ups its precursor’s ante in terms of gratuitous violence, not to mention foul-mouthed dialogue, such that Banning — after a particularly hectic skirmish — greets a glass of water with “I am thirsty as FUCK.”

For all the slicing and dicing of the editing, narrative momentum grinds to a trudge after the synthetic spectacle of the capital’s undoing. Bar one careering helicopter chase, Najafi and his quartet of screenwriters haven’t drawn up many action set pieces that extend beyond Butler lustily cracking skulls and hawking, in a semi-Scots brogue as American as apple pie, such apparently cheer-worthy lines as, “Get back to F—kheadistan or wherever it is you’re from.” There way well be viewers receptive to this ugly brand of reactionary fear-mongering, which — thanks to a release date postponed from last October — can claim accidental topicality in the wake of November’s horrific Paris attacks. But that’s not to credit a scrap of cultural or political perspicacity to a film in which seasoned White House advisors observe with wonder that a massive terrorist strike on the U.K. is “all over social media too.” A film this incurious about the world it demolishes is perhaps smarter when it plays dumb, though even at its most purely physical, “London Has Fallen” remains short on style, rhythm or even tacky formal bravado.

The first, worst, and most profitable of competing presidential-assault thrillers from 2013 — the second, “White House Down,” arrived three months later — “Olympus Has Fallen” treated a terrorist attack on 1600 Pennsylvania Avenue with the utmost seriousness, like a scenario that had been gamed out on Fox News. In essence, it was another “‘Die Hard’ in a [blank]” shoot-’em-up, but because it was about totally plausible matters of national security, the only fun it offered was whatever one-liners Gerard Butler squeezed out. At the time, it felt like a Bush administration relic that had slipped into Obama’s second term, a chest-thumping affirmation of American might against all threats foreign and domestic. And yet here is “London Has Fallen,” which moves the action to a monument-rich European capital but is otherwise the same generic, po-faced bore as the original.

Tension, stakes, character? None of it resonates. Even the action sequences could have been lifted out of a lesser “Call of Duty” sequence, right down to the point of introducing a Scottish sidekick at one stage. There’s a whole sense of ‘that’ll do’ about the whole thing. And it really won’t. The script, in particular, is some achievement. Credited to four writers, it actually feels as though it’s been penned by Donald Trump, using a quality-sapping wax crayon that was pitched to him by someone he fired on week one of “The Apprentice.” Heck, it’s as if the depiction of any national not of American origin has been ripped right off the Daily Mail website. Yet even technically, “London Has Fallen” falters. There are so many sequences that are dimly lit to the point where you genuinely can’t see what’s going on. Actors stand slap bang in the middle of the frame, delivering their lines and moving on. Lines are even quoted that seem to paying homage to the likes of “Predator” and “Con Air.” It’s rarely a wise move to invoke such films in the middle of such a bland action movie.
Peter Bradshaw, Guardian

There is some surreal fun at the beginning as everything collapses, fake police open fire on dignitaries including Germany’s “Chancellor Agnes Bruckner,” and there’s even a “Final Destination” feel to the way all these heads of state get whacked. Butler and Eckhart realise that security provisions in foreignland mean zilch: they can only rely on themselves, along with a few loyal SAS guys and a pert female MI6 agent. But then it’s the same thing over again, with poor old vice-president Morgan Freeman looking like a stricken deer in the emergency ops room.

This is one of those sequels that is essentially a remake, with various details changed to give the illusion of freshness. Instead of Korean terrorists, we get a family of Pakistani arms dealers who just moonlight as terrorists. Iranian-born director Babak Najafi (“Sebbe”) and the four credited screenwriters — the returning Creighton Rothenberger & Katrin Benedikt, plus Christian Gudegast (“A Man Apart”) and Chad St. John — make things move fast enough to keep you awake, but not fast enough to finesse its plot absurdities past an alert viewer’s mind. And then there’s the Gerard Butler problem. He’s in full-on Growl Mode here, as he has been in almost everything else he’s done, even the occasional romantic comedy. The very sight of him triggers memories of “300” and expectations that at any minute he may yell, “This is Sparta!” He forever owns the role of Leonidas, but not as much as Leonidas owns him.

Butler, whether sliding out of a car door to shoot at a pursuer or jumping from some scaffolding and into a nearby building, is as fleet on his feet as director Babak Najafi is in his sculpting of the film’s nonstop flurry of action. Like its predecessor, “London Has Fallen” is content to dumbly relish in the inanity of Mike’s rampage. Outside of a scene where Lynne Jacobs (Angela Bassett) acknowledges our government’s lack of foresight, politics are rarely on its mind. But as smart as it may seem for painting Barkawi, though he’s on the FBI’s Most Wanted List, as seeking revenge solely for the death of his daughter, the film mostly succeeds at advancing Mike’s improbable yet largely singular survival as a symbol of the narrative of American triumphalism.

While not nearly as elaborate, nor as visually sophisticated as the last “Mission: Impossible” outing or the most recent Bonds, London Has Fallen is actually more plausible at its core, if not in its details, which is partly why it succeeds in laying claim to an audience’s attention for the entirety of its swift running time. Iranian-born Swedish director Babak Najafi, who previously did “Easy Money II” and here took over the franchise reins from Antoine Fuqua, maintains a hard-driving pace without descending into frantic narrative illogic and hits the right tone that allows Butler to get off a load of rude, reassuring one-liners. Butler manfully dispenses justice here many times over, and even if the other main actors are in it strictly for the paycheck, they’ve all been in a whole lot worse in their time.

There’s nothing wrong with keeping a storyline similar to a prequel, however there’s almost no attempt at original thought in the making of this film. “London Has Fallen” is absolutely full of clichés. Its plot twists are easier to predict than a sunrise and it has all the classics thrown in, including rousing speeches about freedom, drawn-out deaths and the Metropolitan police crashing into every stationary object in north London. Yet in a way that’s fine, because “London Has Fallen” isn’t aiming for the Academy Award for Best Picture. It sets out to provide the audience with an action-packed hour and 40 minutes of car chases and gun play. Although the sequences don’t quite stand up to the film’s predecessor, they are nonetheless entertaining and accompanied by moments of genuine comedy. There’s an impression that this film doesn’t take itself too seriously and that’s a good thing. It allows you to enjoy the movie for the classic shoot ’em up that it really is, and a fun one at that.

No doubt “London Has Fallen” will have its opponents: it’s politically incorrect, it’s morally indefensible, it’s difficult to take seriously…and it’s also a whole lot of fun, especially if you were raised on the action flicks of the ’80s. If we can keep the R-rated adventures of Banning and Asher going, I say let more things fall where they may.