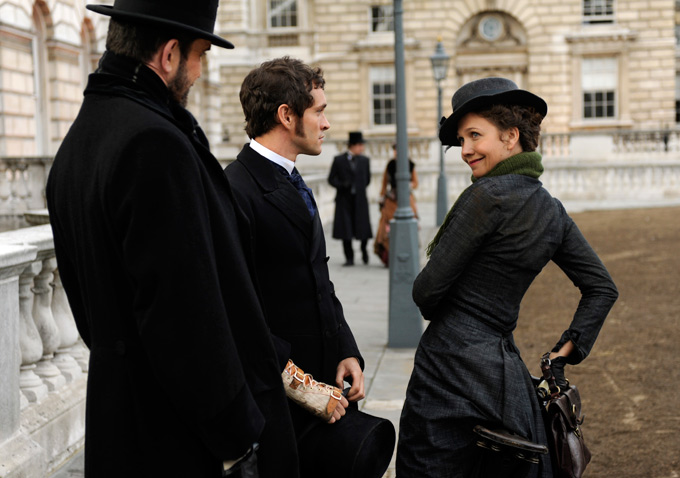 Jameson today announced the three winners of their 2016 Jameson First Shot competition, an international short film competition that gives aspiring screenwriters a chance to break into the film industry by having their short film script produced by Kevin Spacey’s Trigger Street Productions, with actress Maggie Gyllenhaal on board to star in all three. The winners were, charmingly enough, notified of their win by a large movie billboards featuring their names. Contest winners Cameron Thrower (California, USA), Kat Wood (Sheffield, UK) and Jason Perini (Sydney, Australia) were each brought to the location of the billboards by a close friend under the pretense of an informal get-together.

You can watch all three learn they won in the video below.

In a recent interview, Gyllenhaal told Indiewire it was the uniqueness of the contest that initially attracted her to participate.

“I had never heard of anything like this before, where people [who] are mostly beginners are supported by people who have a lot more experience and it has nothing to do with commercialism – it’s just about helping people who are starting out in the industry,” said Gyllenhaal.

Trigger Street received over 2,700 scripts for the contests. After whittling the scripts down to the top twenty, the three winners were picked by Gyllenhaal herself.

READ MORE: SXSW 2016: What Is the Key to Writing a Good Short Film Script?

“Part of my job is reading scripts and deciding if I can act them well,” explained Gyllenhaal. “Out of the 20 scripts, it was totally clear to me which three I can make. It’s not that those three were objectively better, it was that they called to me as an actress. Two of the scripts are really wild. I think in my career I have chosen wild projects and played unusual people, but these [two characters] are so wild. I don’t know if I’d make a whole movie based on these people, but I’m really excited to work with them in the short form, which is so great because you can take a risk.”

Gyllenhaal says that she has had tremendous success working with first-time filmmakers, pointing to her work with Scott Cooper in “Crazy Heart” and Laurie Collier in “Sherrybaby.”

“The key with those movies was they were very small in scope, so if you are a beginner and are new at this, you can focus on the nuances rather than being overwhelmed by the scope of the story,” explained Gyllenhaal. “It’s great because the emotional life [can be] massive, but the scope of the story is small.”

Gyllenhaal was also pleased that one of the winners was a female writer/director: “I wouldn’t have chosen a script that I didn’t think was good just because it was written by a woman, but I was very pleased to find that one of the ones I thought was excellent was written by a woman. If they had sent me 20 scripts and none of them [that] appealed to me were written by a woman, I would have sent them back and asked to read more.”
All three winners are now preparing to shoot in Los Angeles, where they will work with a profession team to bring their scripts to life. They will also receive guidance from Kevin Spacey and Dana Brunetti.

Check out a recent short featured on Indiewire below: