This Week In Home Video: 'The Hateful Eight,' 'Concussion,' and More 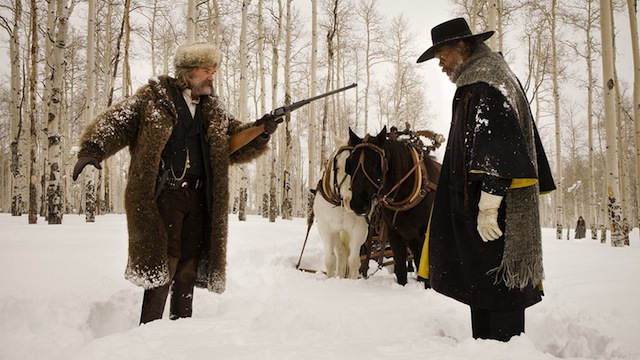 It’s a sparse week for this week in home video, with only a few notable new releases (and only one of those being essential), and a handful of classic titles worth checking out. Let’s jump right into it.

The most essential Blu-ray release this week is Quentin Tarantino’s controversial drawing room mystery/spaghetti western “The Hateful Eight.” Shot in and presented in a limited 70mm roadshow release before a wide digital release, “The Hateful Eight” follows John Ruth, “The Hangman” (Kurt Russell) as he’s taking the violent Daisy Domergue (Jennifer Jason Leigh) too hang with Major Marquis Warren (Samuel Jackson) and Sheriff Chris Mannix (Walton Goggins) in tow. They eventually are snowed in at a haberdashery with a group of mysterious men (Tim Roth, Michael Madsen, Demián Bichir, Bruce Dern) whose intentions become clearer as the film goes on. “The Hateful Eight” proved to be Tarantino’s most polarizing film yet, with many critics decrying the perceived misogyny as well as the reliance on racial epithets, but others found it to be one of Tarantino’s best, a dark examination of the American character. Though the Blu-ray release omits the director’s preferred roadshow version, and our own Sam Adams weighed in on this decision and why fans of the film will want to wait for the real version, but for those who want to get their hands on the Blu-ray as soon as possible, this version is for you.

There are only two other new releases this week that are worth mentioning: the Will Smith vehicle “Concussion” about the NFL’s cover-up of the inherent medical risks, and the so-bad-you-might-want-to-see-it “Point Break” re-make starring Édgar Ramírez and Luke Bracey in the roles originally played by Patrick Swayze and Keanu Reeves respectively.

It’s a more interesting scene over on the classic side of the divide. Criterion has two new Blu-rays out this week: Vittorio De Sica’ neo-realist classic “Bicycle Thieves,” about a struggling father trying to make ends meet for his wife and young son who searches for his stolen bicycle in order to retain his job, and Les Blank’s “A Poem Is A Naked Person,” a 1974 documentary about Leon Russell only released last year after Blank’s death. The Film Detective has Delmer Daves’ “The Red House” about a mysterious red house and two teenagers (Judith Anderson and Lon McCallister) on Blu-ray. Shout! Factory has Michael Cimino’s “The Sicilian,” based on the Mario Puzo novel of the same name, starring Christopher Lambert as the titular sicilian who tries to liberate 1950’s Sicily from Italian rule. Finally, another big release this week is Icarus Films’ “Chantal Akerman: Four Films,” which collects four films from the late legendary director: “From The East,” which retraces a journey from East Germany to Moscow combining fiction and documentary tactics; “South,” a meditation on the American south inspired by Akerman’s love of Faulkner and James Baldwin; “From The Other Side,” which explores the border between the United States and Mexico; “Down There,” a look at Israel and Akerman’s Jewish heritage; and finally “Chantal Akerman, From Here,” an hour-long, career-spanning conversation with the director. The set also contains a 12-page booklet with new essays from Jonathan Rosenbaum and Amy Taubin.

“The Hateful Eight”
Criticwire Average: B+

“The Hateful Eight” draws out tension as though it were very slowly pulling back the plunger on a syringe, and then injects it back in one stabbing motion, jolting itself into a hyperactive state; once the guns come out, so do the flashbacks, voice-over narration (read by the director himself), and shifts in point-of-view. The drawing out it does by taking the long way through every scene, which is sometimes the funniest way — especially if said scene involves Demian Bichir’s stiff-limbed Bob, a comic-strip creation on par with Brad Pitt’s Aldo Raine — but never the easiest. Which is to say: Who would have thought that Tarantino, whose early hits spawned dozens of over-caffeinated imitators, would make a movie that would ask for so much patience? Because patience is what it takes for Chris Mannix (Walton Goggins) — a yokel who’s always going on about the Lost Cause, and says he’s the new sheriff in Red Rock, but can’t prove it — to go from being a caricature to a complicated character in his own right. At the center of this long, deliberate movie sits the complex figure of Warren, the bounty hunter who was once himself a wanted man, and the image of Lincoln, whose death at the hands of John Wilkes Booth is spoken of as though it were Biblical. For the eight, snowed in with their prejudices and their paranoia and their itchy trigger fingers, venerating Honest Abe expresses a belief in something better than themselves, regardless of which side of the Civil War they fought on. (Heck, even “Birth Of A Nation” worshipped Lincoln.) And in a finale reminiscent of “Pulp Fiction’s” enigmatic endpoint, when the ugly American past and present they’ve given voice to has degraded and de-evolved into a caveman instinct of violence and retribution, the remaining characters gather to marvel at what a beautiful idea America could be — one of the few really moving scenes in Tarantino’s highly stylized body of work. Read more.

The movie is engaging and fascinating for much of its two hours. The editing, by Oscar-winner William Goldenberg (he won for “Argo” and also put together “Zero Dark Thirty,” for which he was also nominated), is brisk and inventive, managing to imbue excitement into montages in which Omalu is doing nothing more pulse-pounding than looking at a bunch of slides. Once Omalu finds fans, players, and the football industry itself giving him the very aggressive side-eye, the narrative begins to diffuse a bit. The movie isn’t shy about implicating that NFL chief Roger Goodell (played here by Luke Wilson) is a corporate weasel and liar. But as certain bad things begin happening around Omalu and his colleagues and his wife, things grow vague; the movie, I suppose, can’t just come out and SAY that the NFL is willing and able to do stuff that skirts “Parallax View”/”Three Days of the Condor” territory. I found that this possibly involuntary discretion worked to the movie’s advantage; the non-ratcheting up of the drama somehow made the story feel more true, more honest. The real story, in a sense, is how Omalu’s belief in the goodness of some institutions came under assault, and how he refused to become a cynic even after all that. When he’s called an American hero near the end of the movie, the truth of that phrase, as well as all the contradictions that trail in its wake, are vividly felt. Read more.

Uninterested in competing on the bromance front, or even on the action-thriller front, this new “Point Break” often plays like an extreme-sports documentary with bits of narrative interstitials to carry us along. The production brought together stuntmen and athletes from all around the world for the film’s many setpieces, which include BASE jumping, big wave–riding, motocross, snowboarding, and free-climbing. If you really like that sort of thing, you should see this on the biggest screen you can. But the results, while impressive, lack both visceral impact and kinetic grace. You admire the skill and bravery that obviously went into the effort, without ever really feeling your pulse quicken, or your breath catch. Core uses a variety of filming techniques — GoPros, helicopter shots, close-ups, etc. — which work well in trying to depict the athleticism involved, but take us out of the action narratively and also — here’s the key — undo our sense of awe. For a film that often asks us to marvel at what’s all around us, that’s borderline fatal. “Isn’t that beautiful, bro?” one character asks repeatedly in the film’s climactic scene, but “Point Break’s” beauty is strictly of the pretty postcard variety. Its vistas and action scenes barely make an impact; there’s slickness, but no spectacle. Read more.

“A Poem Is A Naked Person”
Criticwire Average: A-

Blank’s film does have some of the appealing shagginess and digressiveness of the Rolling Stones tour movie“Gimme Shelter,” except that the Maysles brothers and Charlotte Zwerin’s vérité classic actually sticks to its subject most of the time. Anyone who comes into “A Poem Is A Naked Person” knowing little about Leon Russell will leave having no idea about Shelter Records, his hit singles, his years working as a session musician during the boom years of Los Angeles pop and rock in the mid-1960s, or even why he’s singing so many old country songs during the studio scenes. (The answer: The Nashville sessions were for his throwback 1973 C&W record, “Hank Wilson’s Back.”) This documentary isn’t that informative or enlightening. But it is excellent. Some of Blank’s juxtapositions are too on-the-nose, like when he layers a conversation about capitalism over footage of a snake killing a cute baby chick. But more often, the allusions are looser. “A Poem Is A Naked Person” is littered with striking moments that fit casually into Blank’s study of fame and aspiration, like the shots of a literal “goose chase” (where live birds are thrown into a crowd for the residents to catch and cook), or a scene where a little girl sings Three Dog Night’s “Joy To The World” to the guests at a wedding (who look on awkwardly when she gets to the parts about drinking wine and making sweet love). The music in “A Poem Is A Naked Person” is terrific, not just from the spry Russell, but also a non-bearded Willie Nelson and a sweet-voiced George Jones. Blank makes sure to weave the simple, earthy songs through images that show the lifestyle that inspired them — not just of small-town life, but of the pressures of managing a music career and dealing with envy. “Poem’s” most memorable characters aren’t the mega-stars, but people like the shaggy young studio musicians who refuse to listen to anyone who tells them they aren’t “going to the top,” and the the folks working on constructing Russell’s new house, who look at what the rocker’s money is buying and sigh that it must be nice to get paid to do what you want. Read more.

This Article is related to: News and tagged A Poem is a Naked Person, Chantal Akerman, Concussion (2015), Kathryn Bigelow, Les Blank, Point Break, Quentin Tarantino, The Hateful Eight, Will Smith