To Desk or Not To Desk? Or, Why Samantha Bee Is The Biggest Badass in Late Night 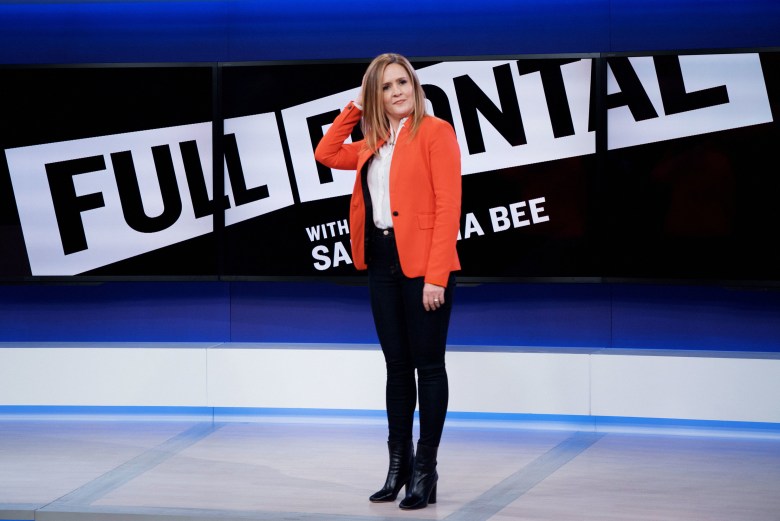 A fun fact you may not know about “Full Frontal With Samantha Bee”: It films in the exact same studio as “Last Week Tonight With John Oliver.” You’d never guess it, to look at the very different spaces, though when you squint at the architecture, they don’t seem too different. Really, the big difference is this: That big damn desk.

To desk or not to desk is an awfully granular thing to analyze when looking at the world of late night, except the more you look at it, the more you realize what a difference it makes. A quick rundown of the current late night scene:

Jimmy Fallon: stand-up monologue to desk, but also spends a lot of time bounding around the studio, playing games with the guests. Also, one of his most memorable interviews of the last several years was a sit-down with Nicole Kidman when he found out that they once were set up on a date. The news caught him so off-guard that he started flailing around the studio. It was, to be clear, pretty damn funny.

Stephen Colbert: same, though there are comedy bits that get him out from behind the desk. 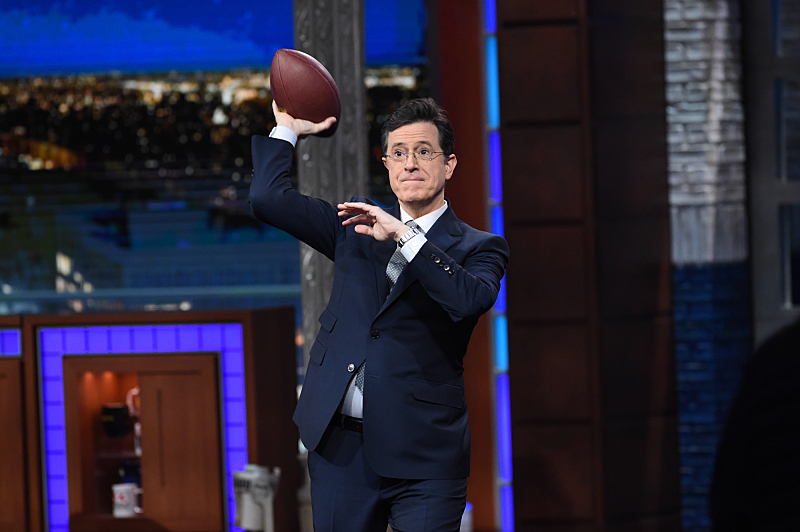 Seth Meyers: famously began his run as host of “Late Night” with a stand-up monologue, before eventually returning to his “Weekend Update” comfort zone behind the desk for the monologue portion. Meyers especially seems to thrive in a seated position, which seems to feed into his amiable delivery of funny — if not particularly biting — remarks. Meyers recently did stand up during an opening monologue, but that was because a joke he’d just told had bombed spectacularly. It’s worth watching. It’s a magnificent moment, and it also represents Meyers at maybe his loosest in recent memory.

Trevor Noah: Despite “The Daily Show’s” long tradition of desk-riding, Noah recently shifted to stand-up in front of a big screen (similar to Bee) and often seems more comfortable in stand-up mode (which makes sense, given that his background is in stand-up comedy). He does still host interviews and comedy bits behind the desk.

Larry Wilmore: starts out behind the desk, but ends the show on his feet for the final moments — including the Keep It 100 game.

When these fellows sit behind the desk, what do they get? Authority. That seems to be the thing that a desk in the late night scene provides — some degree of removal from the audience, some sense of mystery (anything could be under that desk!) and most importantly, a desk stirs up memories of sitting opposite, well, your boss. Seeing someone sitting behind a desk serves as a reminder that you are in someone’s place of business. And for the bespoke gentlemen who spend their time telling jokes on TV, it’s always a telling choice, when they choose to flee the desk versus not.

Which, at this point, is the element of “Full Frontal” that I find the most compelling. Watching “Full Frontal,” you can’t help but notice the way Bee doesn’t just stand on that stage. She strides across it. She owns every square foot of it. Paired with the confident delivery of some hilariously brutal and raw one-liners, her time in that studio is top to bottom a power play that she’s winning.

This isn’t to say the other hosts are doing it wrong. Every host has their style, and when they lock it in is when the show really finds its voice. Sometimes that takes months, maybe even years. As President of Content Development and Original Programming Kent Alterman told Indiewire last fall:

“I think every show takes a while to evolve and find itself, and I think any good show, especially, takes time. I think if any show launches in its fully matured form, that’s not necessarily a good sign because it won’t necessarily keep evolving, and I think the best shows do evolve.”

That’s part of what’s made Bee’s first few weeks so exciting because there’s nothing so far that indicates she’s settled into a routine. Even as she finds her own specific nuances within this format, defining her own approach, it’s highly doubtful she’s found her plateau yet. Every episode — from making the Syrian refugee crisis a human and relatable thing, to explaining why the 2010 midterm election was the most important election of the 21st century — has shown ambition and intelligence we’re coming to legitimately crave.

And she doesn’t need a desk to do it. She spends that half-hour standing up in heels, and — while she may not technically be dancing backward — it’s still the most baller TV in late night.

READ MORE: ‘The Late Show With Stephen Colbert’ Review: Can He Be America’s ‘New Liver’?