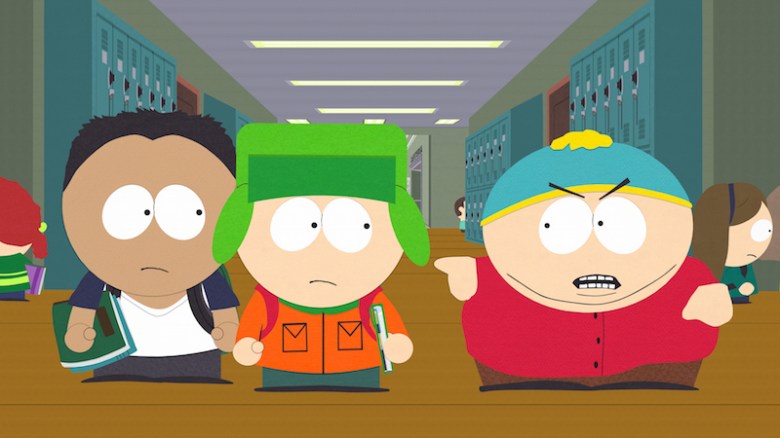 Typically the worst day of the year for comedy, April Fools’ Day 1991 became an exception to the rule with the launch of Comedy Central. The product of a merger between two separate comedy stations — The Comedy Channel and Ha!, Comedy Central — provided a new space for standups, animators and sketch comedians to pretty much do whatever they want.

READ MORE: If Comedy Central’s ‘Idiotsitter’ is Half as Funny As Talking to Its Creators, It Could Be the Funniest Show on TV

The network spent the next 25 years taking chances on new voices, continuing that tradition today with a string of critical and commercial hits for, maybe, the first time in their lifespan.

From the outset, Comedy Central knew that new comics were its lifeblood, and few shows gave them a more regular and interesting outlet than “Dr. Katz, Professional Therapist.” Casually known as that squiggly cartoon where everyone whispers, Dr. Katz featured real comics doing a combination of new material and their own standup routines on a couch as fictional therapist Dr. Jonathan Katz analyzed and discussed their issues. Airing constantly between reruns of “The Critic” and the Fat Boys’ movie, “Disorderlies,” “Dr. Katz” was wildly important to the relationship between the network and the comedians, offering them opportunities outside of the station’s standup shows, “Premium Blend” and “Comedy Central Presents.” Between 1995 and 1999, the show evened the playing field for comics new and old, with guests ranging from veterans like Rodney Dangerfield, and Joan Rivers to then-up-and-comers Louis CK and Dave Chappelle.

“South Park” didn’t just put Comedy Central on the map, it ripped a hole in it. Creators Matt Stone and Trey Parker’s crappy-looking cartoon took over television in 1997 as Kyle, Kenny, Stan, and Cartman could be found on talk shows, endless amounts of merchandise, and the space that used to feature Bart Simpson. 20 years later, the show is remarkably very close to the same and, dips in quality aside, it continues to receive critical acclaim and millions of regular viewers. Considering it’s been on for two decades, it might be the longest-running, consistently good series of all time; delivering at least one cultural phenomenon per season.

But what can be said about the show that hasn’t been said? It’s the first and only cartoon where viewers expect the week’s current events to be satirized. It pushed adult animation into the mainstream, opening the door for pretty much everything Seth MacFarlane and Adult Swim did after. It fought for first amendment rights, challenging the network for the right to say what its creators felt. All the while, it held on to its Wednesdays at 10pm time slot, acting as a lead-in to all of Comedy Central’s hopeful hits. For all the network’s success, it has “South Park” to thank.

“The Daily Show with Jon Stewart”

Just before the explosion of “South Park,” Comedy Central took a stab at late-night TV. Along with host Craig Kilborn, the network took on the news of the day, adding snark, satire, and moments of zen. “The Daily Show” grew into a late-night institution when Jon Stewart took over in 1999 as “the fake news” was about to become TV’s voice of reason.

“The Daily Show with Jon Stewart” not only became an incubator for America’s greatest comedic minds, like Stephen Colbert, Ed Helms, Samantha Bee, and many, many more, but also as the center of the satirical universe, influencing a slew of imitators (mostly hosted by former “Daily Show” staffers). Stewart’s persistence, authenticity and general goodwill helped a generation express the social and political frustration of the last 20 years. His legendary feuds with 24-hour cable news and its pundits cut through the static, offering a clear voice for its viewers and the network. Jon Stewart’s departure in 2015 cemented how big of a voice Comedy Central now had in shaping our understanding of the world.

Capped off with the iconic “Frontline” parody about a blind white supremacist who doesn’t realize he’s black, the first episode of “Chappelle’s Show,” promised a major shift in comedy. At a time when the network was trying to convince us that “girls jumping on trampolines” was satire and that Blue Collar Comedy was comedic, Chappelle and co-creator Neal Brennan would be producing a show that would sink its teeth racism, sex, drug use, and gun violence and draw blood.

The show was a huge hit, complete with catchphrases that quickly irritated the show’s fans and creators alike, and this mainstream success would be the show’s undoing. Chappelle, who was skeptical of how his message was being received, abruptly left the show during production of his third season. Even in its incomplete state, “Chappelle’s Show” stands as one of the most influential comedy shows ever, providing hours of satire that’s as relevant today as it was when it premiered. And as for its star, because of the series, he is regularly considered one of the best and most innovative comedians of all time, and one of the biggest stars the network ever launched.

“The Comedy Central Roasts” aren’t the most elegant or sophisticated of Comedy Central’s offerings, as the guest of honor is verbally abused by a panel of friends and insult comics, but they are the closest thing the network has to a cultural event. Now extending far past comedians, the Roast acts more like a way for celebrities in the throngs of controversy to get some goodwill back, a point famously made by Hannibal Buress at the roast of Justin Bieber. Still, these things are one of Comedy Central’s biggest ratings bonanzas, so it would be wrong to ignore, especially when it made stars out of the late Greg Giraldo, Amy Schumer and the Roastmaster General himself, Jeff Ross. That doesn’t necessarily mean that Ross is Jon Stewart, but with over five million people watching these things, to many, he kind of is.

A big Dave Chappelle-sized hole sat in the middle of Comedy Central over the next decade or so after his departure. Testing out various formats and experimenting with new comedians, none seemed to breakthrough, regardless of quality, in the way Chappelle did. Around 2012, the network got their new cultural force: Amy Schumer.

Unlike many of Comedy Central’s one-season wonders, “Inside Amy Schumer” was given time to grow, which has paid off royally for the network. With slight bumps in quality from season one to two, the show exploded in 2015 with hit after viral hit, culminating in the show’s infamous “12 Angry Men” parody. Schumer’s skills as an actress, writer, and satirist plowed through, providing Comedy Central with a female perspective that’s rarely been as unfiltered and cutting. Now one of the biggest stars in the world, Schumer has become one of comedy’s most outspoken figures, becoming an unexpected poster child for female empowerment.

Whatever doors Amy Schumer, Amy Sedaris, Sarah Silverman and countless other women had to break down, “Broad City” was on the other side of it. This is full-blown, unapologetic weirdness that has mixed low stakes and high energy, empowering stars Abbi Jacobson and Ilana Glazer to make what New York City their own, even if they don’t stop to give an overarching message. “Broad City” allows its female character to be weird, smart, sex-positive, dumb and most importantly, human — without necessarily having to make a huge deal out of a woman farting on television. It’s groundbreaking in the freedom of its expression, in its non-judgmental attitudes toward sexuality and femininity. To “Broad City,” people are gross and that’s funny, implying that we don’t really need to make a big deal out of this stuff anymore; we can just do it. “Broad City” is currently Comedy Central’s defining show, giving a voice to a generation of people who exude equal parts confidence and neurosis, ambition and contentment. Expect more shows like “Broad City” in the future, but accept no substitutes.

Stay on top of the latest TV news! Sign up for our TV email newsletter here. And for more from Comedy Central…

This Article is related to: Television and tagged Broad City, Comedy Central, Inside Amy Schumer, South Park, The Daily Show, The Daily Show With Jon Stewart