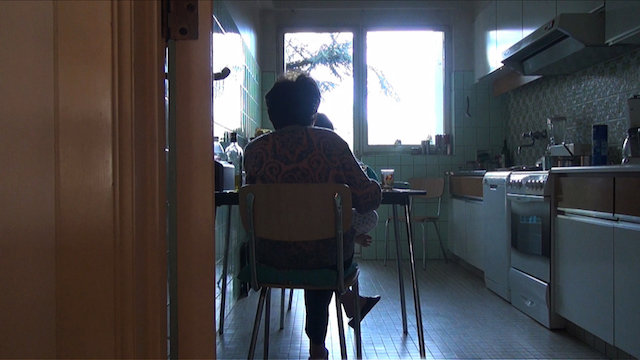 Even before she committed suicide last fall, Chantal Akerman’s final work “No Home Movie” was a tragic statement on the futility of life. An essayistic account of the filmmaker’s relationship to her ailing mother, a Holocaust survivor lost in the fog of faded memories, “No Home Movie” drifts through a somber world with ghostlike intrigue. In between fragments of Skype conversations and living room hangout sessions, Akerman inserts prolonged shots of landscape, sometimes in motion and elsewhere completely still. At one point, she lingers on her murky reflection in a pond. Individually, these moments are difficult to parse; collectively, they amount to an existential wail. At the same time, they carry a profound beauty that hints at more uplifting possibilities.

Now available to watch on Fandor and screening at BAMcinematek ahead of a massive Akerman retrospective, “No Home Movie” is the definitive response to the Brussels terrorist attack from a Belgian filmmaker, even though it preceded the event in question. The movie is haunted by the inevitability of death. Akerman’s camera lingers for minutes on end as her mother sits in a shadowy room, struggling to breathe, while only the slightest ray of sunlight peeks into the room. The director often frames the older woman from afar, as her raspy recollections and disconnect from her daughter’s life exacerbate the sense of dislocation. Akerman, however, only appears in the aforementioned reflection and as the tiniest pixelated figure in her Skype calls. With time, the movie engenders a claustrophobic quality in which Akerman’s world has squeezed her out of it.

Akerman has been a master of slow cinema ever since her 1975 breakthrough “Jeanne Dielman, 23 Quai du Commerce, 1080 Bruxelles,” which follows a housewife through her routine over the course of a 200-minute running time. Clocking in at a comparatively brief 90 minutes, “No Home Movie” brings the filmmaker’s fascination with time in cinema into the 21st century. In an age of ubiquitous moving images, when twirling gifs and random YouTube clips generate more views than many deeper accomplishments, “No Home Movie” brings clarity to the noise. The nimble digital video camera has a homegrown quality that makes individual scenes easily mistakable for the kind of tossed-off documentation of family life rebuked by the project’s title. By calling it “No Home Movie,” Akerman is basically telling her viewers: I know you think you’ve seen this before, but look again.

And when you do, a new set of possibilities opens up. When I first saw “No Home Movie” at the Locarno Film Festival in August, I was impressed with Akerman’s ambitious approach to embedding subtle ideas in ordinary exchanges and visual tangents, but less enveloped in the bigger picture. Akerman’s technique requires a willingness to commune with her style, to the point where her filmmaking has an almost meditative quality.

On second viewing, it hit me: This is a movie about everything — the intimate moments shared by two people in a room, the sadness of being alone, and the indifference of the universe to everyone’s petty problems, no matter how fucked up they appear in the moment.

Akerman drives home that last point with a single extraordinary image late in the movie, shot from the edge of an expansive yellow field; an entire city is visible in the distance. The image has a painterly sophistication to its complex palette, which strikes a telling juxtaposition to the grungier visuals shot in the confines of Akerman’s home. From the personal, “No Home Movie” shifts to cosmic heights, conveying the minuscule nature of the world as we will always know it. Contemplating a post-human consciousness, it enters the realm of science fiction.

Of course, “No Home Movie” belongs to a more specific tradition of experimental cinema, both from Akerman’s own oeuvre and many others. But it has a unique rhythm that demands patient viewers and rewards them for their efforts. No matter the depressing undertones, it’s a spectacular parting gift.

“No Home Movie” is available now on Fandor and screening in New York.

This Article is related to: Reviews and tagged Chantal Akerman, No Home Movie, Reviews