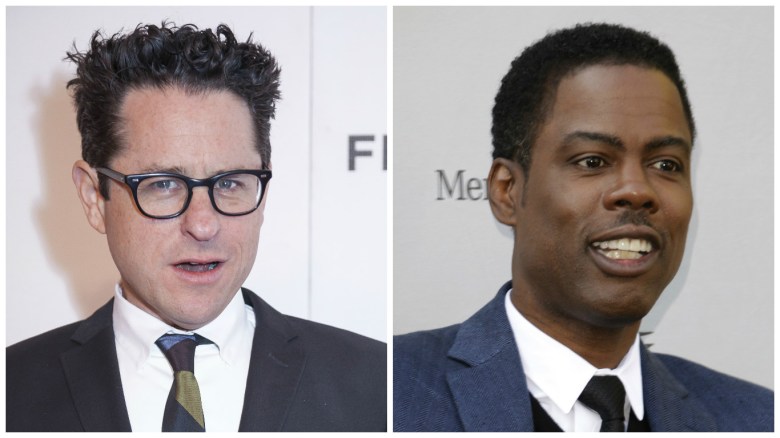 J.J. Abrams and Chris Rock have more in
common than you might expect.

Collaborators on the hilarious short video
clips shown at the most recent Oscars, where Rock was a second-time host, the
“Star Wars: The Force Awakens” director and comedy giant share a desire to challenge themselves with ambitious projects that take them out of their comfort
zones. During a panel conversation at The Tribeca Film Festival on Friday, one
of the many things the pair discussed was which actors they’d most like to
work with.

“I want to direct Denzel [Washington] in
a comedy,” Rock said, adding that Washington hasn’t yet played a lead role
in a comedy feature, despite his ability to be charming and funny at the same
time. “He can kind of do anything.” Though Abrams and Rock both have
experience directing features, Rock went out of his way to highlight their differences. “I make movies occasionally,” Rock said.
“You’re a director.”

Abrams said the two actors he’d most like to
work with are Meryl Streep and Robert De Niro. While those names would likely
top many directors’ casting wish lists, Abrams had a much more surprising
answer when asked what type of project he’d like to do given the opportunity to
direct anything.

“I would love to do a half-hour
drama,” he said, adding that his favorite TV show of all time is “The
Twilight Zone.”

Though Abrams and Rock both said they’d love to work with each other on a project, there is no collaboration in the works, contrary to a suggestive headline in The New York Times.

As producers, Abrams and Rock are both
uncompromising when it comes to their approach to hiring collaborators. Rock
said he once fired a director just because he didn’t like Woody Allen’s “Annie
Hall.” For Abrams, the attribute he said is a must-have for anyone he
hires–cast or crew—is respect for others. “A deal-breaker is people who
aren’t kind,” Abrams said. “When I’ve heard that there are people who
are difficult, I’ve almost always said no.” The one time Abrams hired an
actress despite her reputation for being rude, on the TV show
“Alias,” the result, he said, was a “disaster.”

While Rock said that Abrams was one of the
most “intense” people he’s ever worked with, he added that he enjoyed
Abrams’ “sunshiny intensity.” He did have plenty of criticism for
others, however, calling out some recent superhero movies.

Interestingly, Rock was the bigger comic book fan of the two.

“I love the Fantastic Four and they keep
fucking it up!” Rock said, prompting Abrams to suggest that Rock direct
the next installment of the franchise himself. “They need someone better than me,”
Rock said. “I like it so much I don’t want to direct it.”

When a child in the audience asked the identity of the parents of “Rey,” the protagonist of “The Force Awakens,” Abrams responded with a hint that instantly created a wave of online speculation.

“Rey’s parents are not in Episode VII,” Abrams said, suggesting that Luke Skywalker is not Rey’s father. “It is something that Rey thinks about, too.”

Perhaps the most memorable moment of the evening came at the very end, when a man wearing a Jedi-esque cape told Abrams he had seen “The Force Awakens” 18 times and had recently quit his “soul-sucking” job on Wall Street to blog full-time about “Star Wars.”

“You’ve seen ‘The Force Awakens’ more times than I have,” Abrams said. “I wish you the best of luck in your new career as a professional blogger.”

Watch the trailer for Tribeca entry “Elvis and Nixon” below.

Get the latest film festival news! Sign up for our festivals newsletter here.

This Article is related to: News and tagged Chris Rock, J. J. Abrams