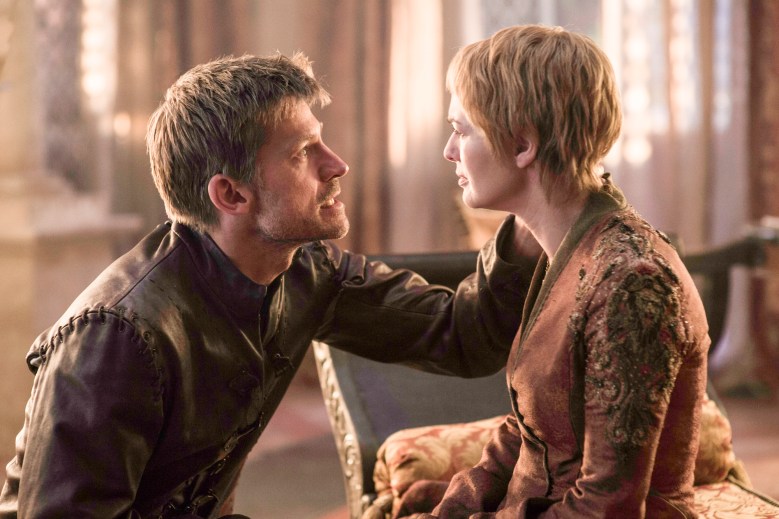 Every week this season, Indiewire will be bringing you a unique collection of viewpoints on “Game of Thrones,” as it is a show that elicits a unique sort of reactions. Our writers are, to varying degrees, well-versed in the world of the show and the culture surrounding it, and we look forward to seeing how their opinions fare in the cutthroat world of Westeros… Sorry, that is, the cutthroat world of television criticism.

Jon Snow is dead, as is Myrcella Baratheon and many, many Martells. While Davos gathers some of the Night’s Watch to plan their next move, given the Wilding threat, the Sand Snakes make their move to take over Dorne, while Cersei mourns the loss of her daughter and reconnects with Jaime. Daenerys now travels with a new Dothraki clan, Tyrion and Varis a blind Arya, begging on the street, gets a sign of hope that the House of Black and White might give her another chance. Oh, and the titular Red Woman is, beneath her magical facade, an old woman. The full extent of her powers once again remains unclear. 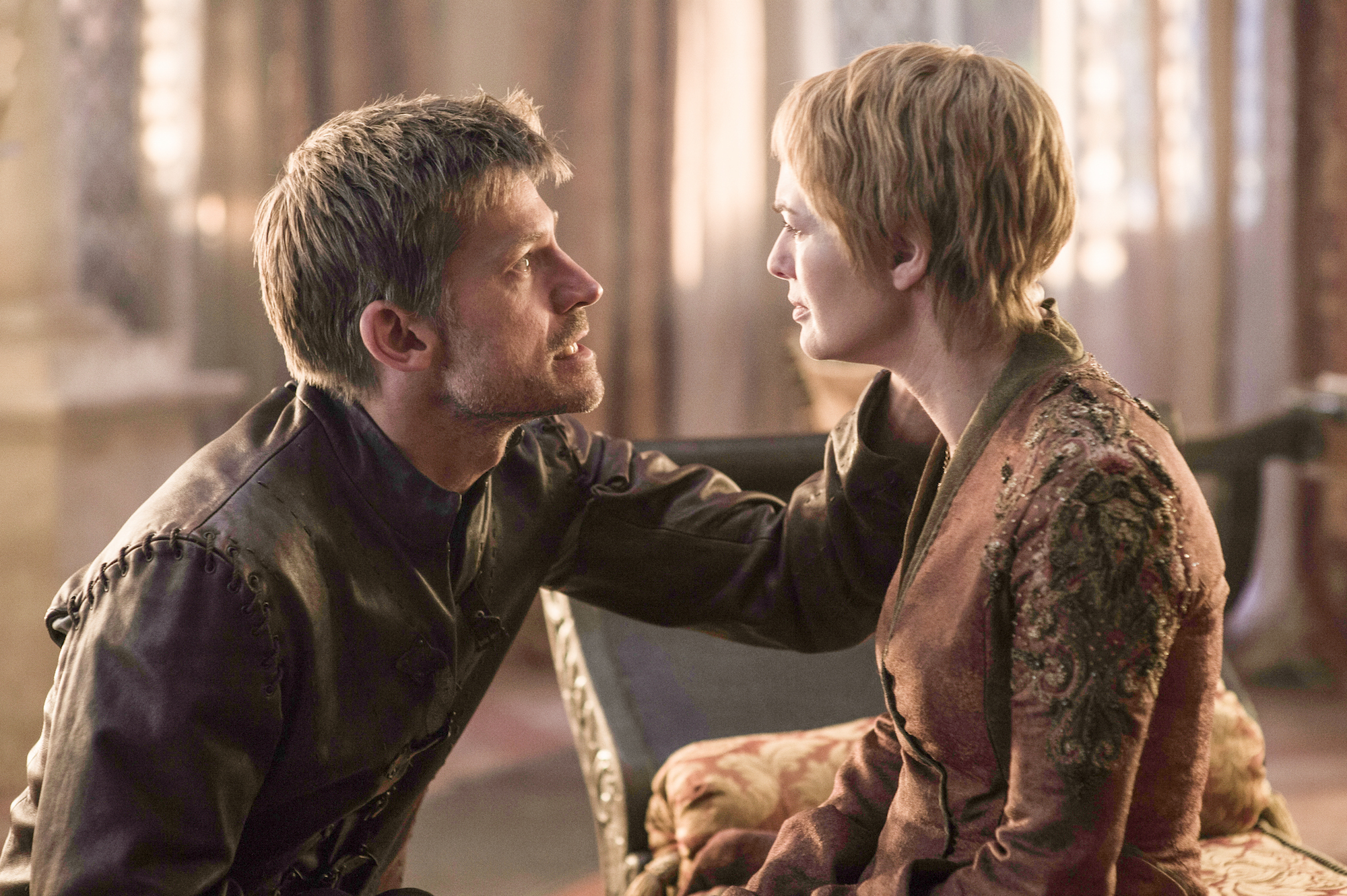 I’m surprised Jon is still dead. They’re obviously going to bring him back, so what’s the point of dragging it out even further? Instead we get mostly table setting (Dany being dragged to Vaes Dothrak with Essos’s Greatest Detectives on her trail, blind Arya’s stick-fighting training, the question of who commands the Children of the Harpy) and table clearing (the Dorne bloodbath.) Killing off Doran, Trystane and Areo Hotah is probably a good call. There’s no denying that the Dorne storyline from last season did not work, so they’re likely better off cutting bait on that whole part of the story.

Beyond the various plot machinations, this episode drew enormous power from a series of great moments focusing on women’s eyes. The shining eyes of Brienne as Sansa finally accepts her into service, and how Sansa strains to fill her mother’s shoes. The way the light goes out of Cersei’s eyes when she sees Myrcella’s bier. Melisandre’s look of utter defeat, both when she sees Jon’s body and later when we see her true, undisguised form. Dany’s resolve in the face of disaster. Margaery’s tattered poker face. The dragons and magic and ice zombies don’t mean a thing without these grounded, revelatory character moments.

I’ll take Brienne beaming at Sansa’s feet over Trystane getting a pike through the face, always. 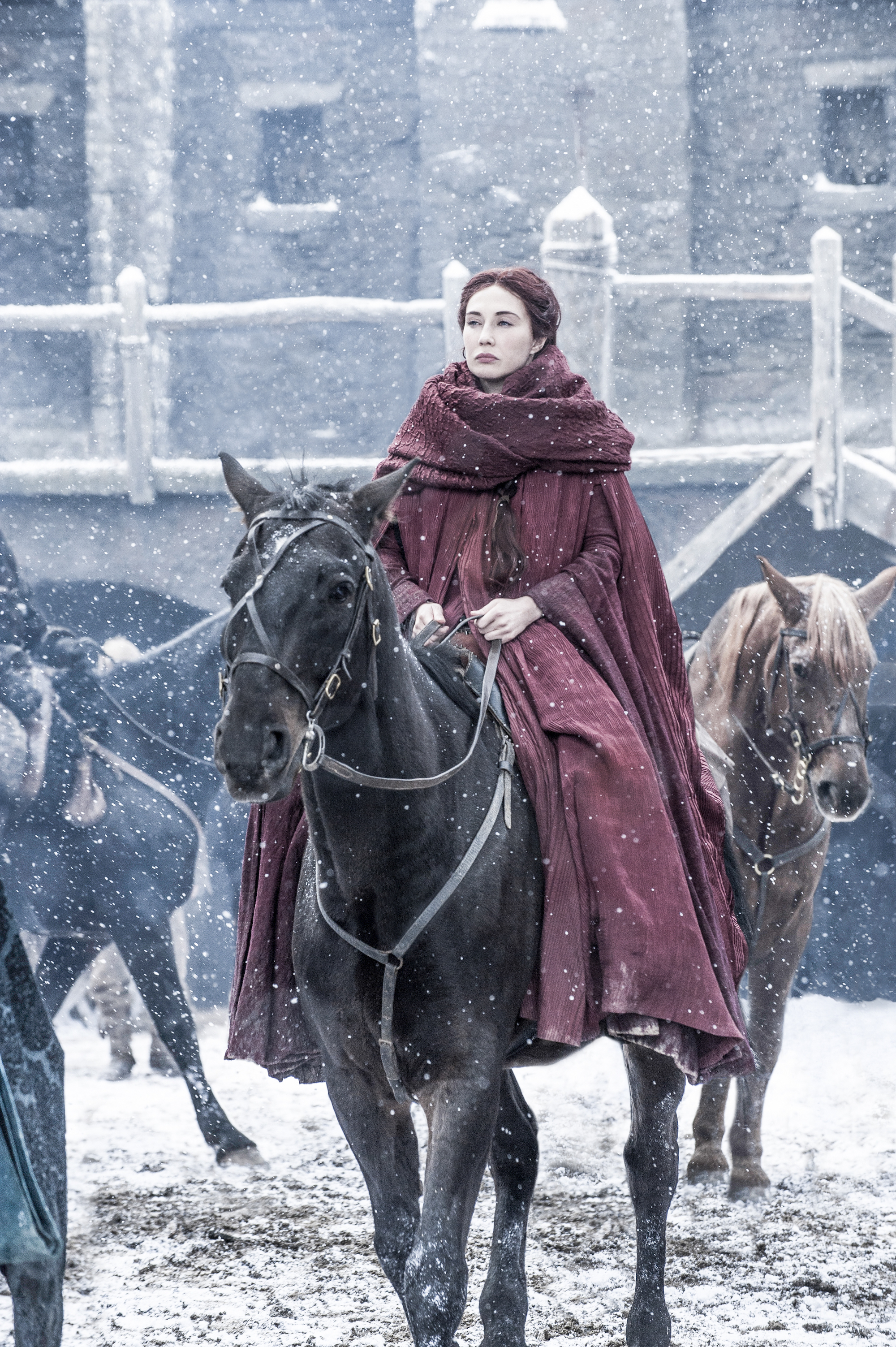 Fans hoping that “Game of Thrones” might substantially resolve any of the myriad of cliffhangers from last season had to be a little disappointed by Sunday’s episode, which mostly seemed about positioning the characters for future developments. We did get one big reveal: That the “Red Woman” Melisandre is a lot older than she seems, dropping a spell that made her look like a Medieval supermodel to show she must be centuries old. Otherwise, we saw Jon Snow’s body guarded by his friends from the rest of the Knight’s Watch; Sansa and Reek saved by Brienne; the women of Dorne murdering their male relatives to take over the kingdom, and no glimpse of Daenerys’ dragon, who has always been my favorite character. It was nice to see women doing the killing for once; it felt a little like evening the score, for so much gratuitous sexual violence from the show’s early years. But with so many characters to catch viewers up with from all corners of the kingdoms, no one plotline really moved very far, which left me feeling a bit flat. 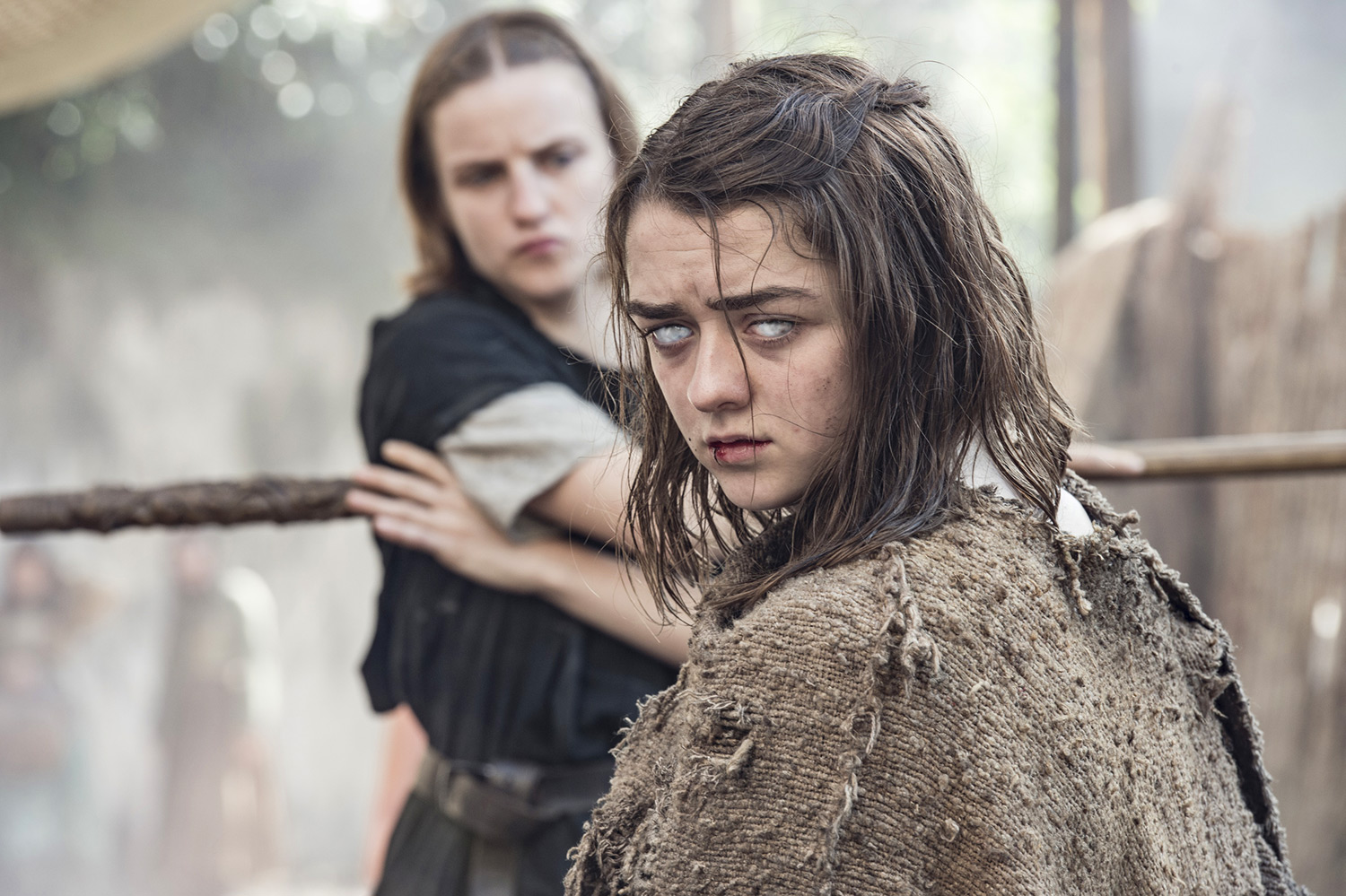 This was a banner “Game of Thrones” episode for me, and maybe a first, in that it managed to feature a naked Melisandre without leaving me beside myself with irritation. Normally this show is so stupid about her vamping, so willing to protect her character at the expense of every other more interesting experience of womanhood, that it leaves me raging against the reductive “hot naked woman” voyeurism that sometimes passes for psychology in prestige TV. But this episode — an episode named after her — treated Meisandre differently, let us turn into her, let us see her as a woman divided and pitted against herself. The episode’s final shots, of Melisandre as a crone, with her steel gaze reflected on herself in the mirror, and then climbing, so gingerly, into her bed, tell us something so wise about being a woman in Westeros: that it is fucking exhausting.

I loved that; loved it especially at the end of an episode that saw so many women turned against each other, rivals rather allies. Overall, this episode felt spread a little thin — setting the stage, rather than delivering the action, and: seriously, that’s it, about Jon Snow? The job of a season premiere is to make me excited about what’s to come, and I’m not sure that happened here. But you know what? Give me a triumphant Brienne; give me a self-present Sansa; give me two women binding their lives to each other, and I’ll take it — these ladies are so much more interesting than all the boring dudes, at least when the show lets them be. 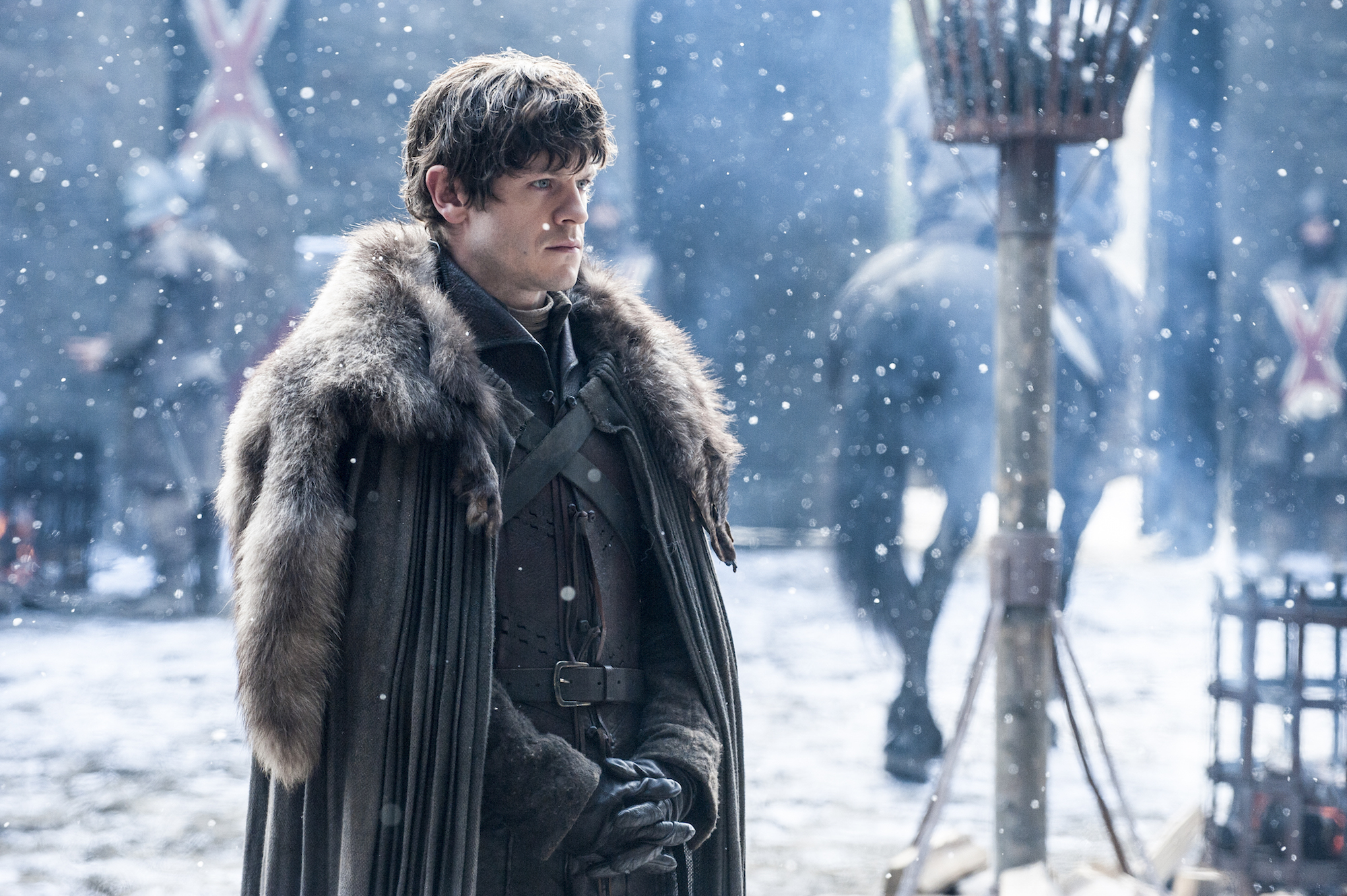 The premiere was all about the good, the bad and the Bolton. Although the “previously on” segment seemed interminable, it helped the episode jump right into the stories to deliver us real, satisfying action. Sansa’s plot was the strongest: Brienne finally saved her Stark girl, Theon acted human and less Reeky, and that knight’s oath brought a tear to my eye. It was a surprisingly affecting moment, as was Melisandre regarding herself in the mirror after removing her magical choker. I wasn’t surprised by her crone underpinnings — after all, R’hllor works in mysterious ways — but Carice van Houten’s quiet and understated performance was tired, mournful, resigned…beautiful.

Unfortunately, the show’s depiction of Dorne still irks me, because Ellaria and the Sand Snakes are so freaking overdone and cartoonish. And when I recall how Dorne in the books is actually far more feminist, I can only cringe. The gowns were gorgeous, though. Finally, my favorite dysfunctional family thrilled me as only the Boltons can. Roose threatening Ramsay with getting disowned? Father of the Year (again)! But Ramsay’s eulogy for Myranda was simultaneously hilarious and frightening, as was his very practical solution for her burial. Why I can cheer on the villainous Boltons while excoriating the Sands may lie in what I feel their eventual fate will be, but “Thrones” also makes me hyper-aware of how women are depicted. Do the Sands come off as assertive or just bitchy? If they were men, I’d still say they were bitchy and petulant. It’s one thing to attack your enemies, but it’s another to betray your own people. Sorry, Sands, I’m not drinking your “Lemonade.”

As seen above, our critics responded positively to individual moments of the episode, especially those showcasing how it embraced the powerhouse female characters at its core. The primary complaint was that “The Red Woman” was largely devoted to setting up plotlines, as opposed to telling a centered story. In the weeks ahead, we’ll see how this “table setting” (as Jay Bushman put it) pays off.