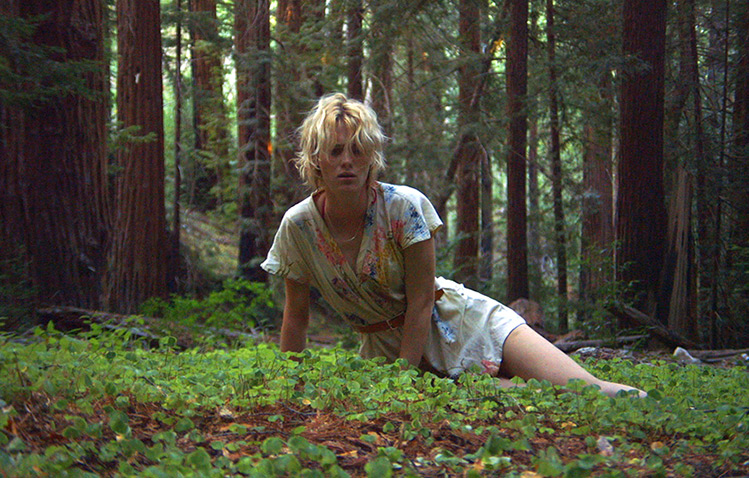 For her feature directorial debut, filmmaker Sophia Takal mined the rich (and often unsettling) world of female anxieties and jealousies to craft 2011’s “Green.” A hit on the festival circuit (and a Gotham nominee), Takal starred alongside her then-fiancé Lawrence “Larry” Michael Levine and fellow rising star Kate Lyn Sheil, in addition to directing, writing and editing the feature. Filmed with a skeleton crew on a secluded patch of land, the film follows a couple (Sheil and Levine) who find the distance between them growing when they make a new friend (Takal) after a recent move to the country.

The themes of “Green” and the way Takal approaches them with an acute, unflinching eye also pop up in her Tribeca premiere, “Always Shine,” which again centers on two women coming to terms with each other in a tucked away location (in this case, Big Sur, California). For this outing, Takal has pulled back a bit and planted herself firmly in the director’s chair, while Levine provided the script and shows up in a sweet supporting role. While “Green” was more concerned with the kind of jealousy sparked by competing for a man, “Always Shine” turns its gaze on something Takal knows even more about: professional jealousy.

Starring Mackenzie Davis and Caitlin FitzGerald as Anna and Beth, longtime friends who are both actresses at very different points in their careers, “Always Shine” digs deeply into the kind of emotions that career anxieties can stir up between the closest of friends. Pulled out of their comfort zone and placed into the seclusion of a girls’ weekend at a remote cottage, Anna and Beth’s issues spill over into an eye-popping and unsettling new film, one that gleefully injects the honesty of “Green” into a spiffy genre package.

Indiewire caught up with Takal after her film’s debut at Tribeca to talk about how “Green” led to “Always Shine,” how jealousy has impacted her own life and why professional competition forced her to do something different.

“Green” and “Always Shine” share a lot of the same themes. What did get to do on this film that you didn’t get to do with “Green”?

“Green” was made with my roommate/best friend at the time and my fiancé. It was a two-person crew. It was mainly improvised and I didn’t have any expectations for that movie. I didn’t know if anyone was going to see it or like it. As it was playing, a piece of feedback I got was, “You kinda made it genre-y, but someone should have died. You should have made it more genre-y.” So I was like, “Okay, next time.” [laughs] So that’s where the idea came from.

Also, in “Green,” we conceived the idea of a movie and then made it a month later. “Always Shine” came to me because of some emotional stuff I was going through that I was talking to with Larry, and then Larry took the idea and wrote a whole real screenplay. That was in 2011.

What happened after Larry wrote the script?

Between 2011 and 2014, we were trying to get the movie off the ground. It was a lot longer development process than “Green” and a lot of decisions I made came from wanting to have a more successful movie. Wanting to cast more recognizable actors, not being in it myself, wanting to have more tools at my disposal in terms of camera and score. And, of course, wanting to make a movie that has stronger genre elements, as another way of getting a distributor to be interested in putting it out.

And the emotional things – I kinda went crazy right after “Green” came out. I was feeling really jealous of all my friends, really competitive. Just career-oriented. Very much like Anna in the first half of the movie. A lot of the stories she tells, like shoving her boyfriend’s manager, are based on things I really did. I was really angry and Larry was watching me go through this and watching me alienate myself from all my friends and having no sense of perspective on what life’s really about. I started to realize it was because my whole identity was wound up in being a perfect woman, but feeling like a total failure at that. Being so angry at the women I felt embodied that perfect femininity, and hating them and wanting them to die. But also wanting to be exactly like them. 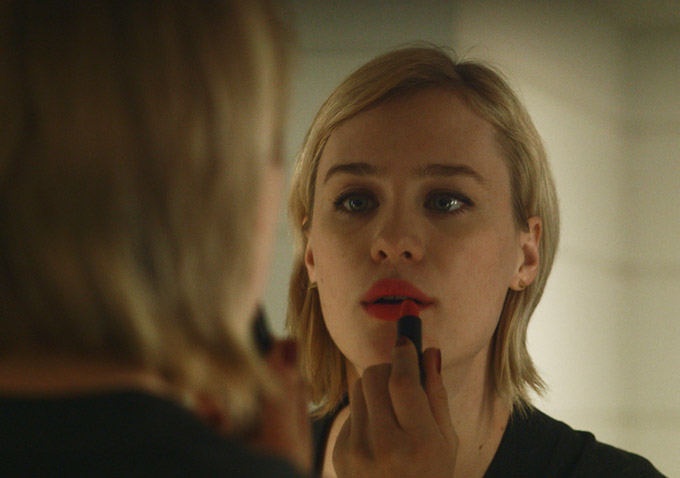 It’s funny that, instead of bonding over their shared experience, Anna and Beth are driven still further apart.

It’s such a big thing in the industry, because there are such few roles for women, there is a scarcity mentality. I think for everyone in a capitalist society, but specifically for female actresses, you are literally competing against everyone that looks like you for the same exact part. My perception is very little of it has to do with talent. You are more famous, so you are more valuable in China, so you are going to get cast in a part.

It’s a more celebrity-driven industry, even indie film, especially indie film, more and more famous people are doing movies for a lower budget. There’s really not room for people to break through in the way there might have been in the past. So there’s this intense competition between women. You are sitting in a room with a bunch of people that look like you and you know none of you are gonna get the part because they made an offer to someone famous.

There is a shift. I don’t know if it’s a shift because there’s a new wave of feminism so women are more supportive of one another, or maybe because I’m stopping acting as much and more focused on filmmaking so female filmmakers are more supportive. But whatever it is, I don’t feel that same feeling of being pitted against other women.

READ MORE: Tribeca: 11 Female Filmmakers to Check Out at This Year’s Festival

You also cast two rising stars to be your leads. What was your hope for casting a film that is so much about the world of Hollywood?

Another reason why I wanted to cast actors I didn’t know I wanted to grow and stretch as a director, and communicate with actors who didn’t know exactly what I wanted, and who weren’t familiar with the way I communicated prior. I think I succeeded at being a communicative director to people who didn’t know me. I’m happy with how it worked, but it’s something I was nervous about. Can I direct? Can I only direct my friends? At the same time, part of the reason I casted Mackenzie and Caitlin in particular was because they had such a deep understanding of the material. When I was casting, of all actresses, they just understood so well the feelings and the themes and understood the characters they were playing.

One thing I did want to keep from “Green,” which I didn’t want to lose even if I brought in people that know me, was the intimacy and a sense we were all making a movie together, rather than I was making a movie and they were pawns. I’ve acted in smaller parts on bigger movies and felt like there was a line between the cast and the crew and there are all these different weird dynamics. I found actresses that were willing to come live in a house in Big Sur and come do weird new-agey meditation warm ups in the morning with our DP and who helped cook dinner. 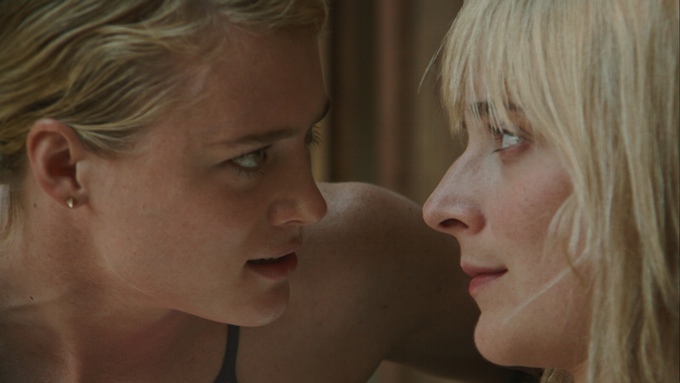 You have a much larger crew than with “Green,” including the addition of editor Zack Clark. The editing of the film really plays up its genre-y feel. How did you two decide what that would look like?

Zach Clark totally brought all of that to it. I had cut a tiny little assembly of the first scene into the opening credits and it was a shell of what he did. I wanted it to be weird, I just don’t have the skill to do this, and he was like, “Oh, I know what to do.” He cut a really cool opening credits sequence and was like, “What about this?” I was like, “Yes, do that the whole movie,” and he brought so much in terms of creating that style. He had me watch Japanese sexplotation movies from the 1960s.

One of the best scenes of the film, however, works so well because it’s not cut down. You pan between Caitlin and Mackenzie during one of the most intense scenes, and it ratchets up the tension quite a bit.

That was the only scene that when Larry wrote the script, I had exactly in my head how I wanted to shoot it. I built it all from that, I want one take. That was one of our hardest days of shooting because they were so emotional.

One of the actors was like, “I don’t think I can do it anymore” and I got really angry inside and was like, “No, I’m giving you a really cool opportunity right now, rise to the occasion.” It was the first week and I could tell I was gonna lose it. I had to calm myself down and say, “I don’t feel like we have it yet, if you need a break, let me know.” I was really proud of myself. Maybe if I’d been with two friends I’d have freaked out. But I was professional.

“Always Shine” premiered at the 2016 Tribeca Film Festival. It is currently seeking distribution.

For more from another title in Takal’s filmography, check out the trailer for “Green,” embedded below: