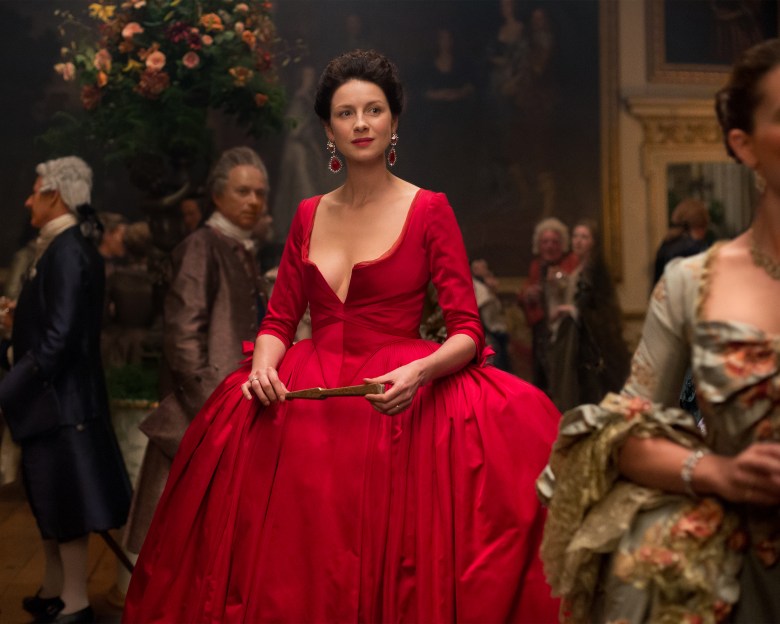 In Season 2 of “Outlander,” Claire (Caitriona Balfe) continues her trippy journey as she travels with Jamie (Sam Heughan) from Scotland to Paris to thwart the Jacobite rebellion. And with this dramatic shift comes a visual splendor from the crafts people, who were more than happy to embrace the glam of the French Court of Louis XV.

“18th century Paris is the most magnificent period in terms of design for architecture, art, fashion, and landscape,” said production designer Jon Gary Steele, with shooting in Scotland, Prague and England, doubling for Paris and Versailles.

“Last season was utilitarian in Scotland—it was all about surviving: working the land and fighting for your land. This is more about elegance, the decadence, the over-the-topness,” said Steele. “To show the contrast was fun because they didn’t use a lot of color last season. We jokingly called it ‘Brownlander.’ It was gray or brown with stone and wood. Here there’s more emerald and gold; it’s deep and rich and rubbed with waxes. There are printed tapestries and all the moldings are gilded.” 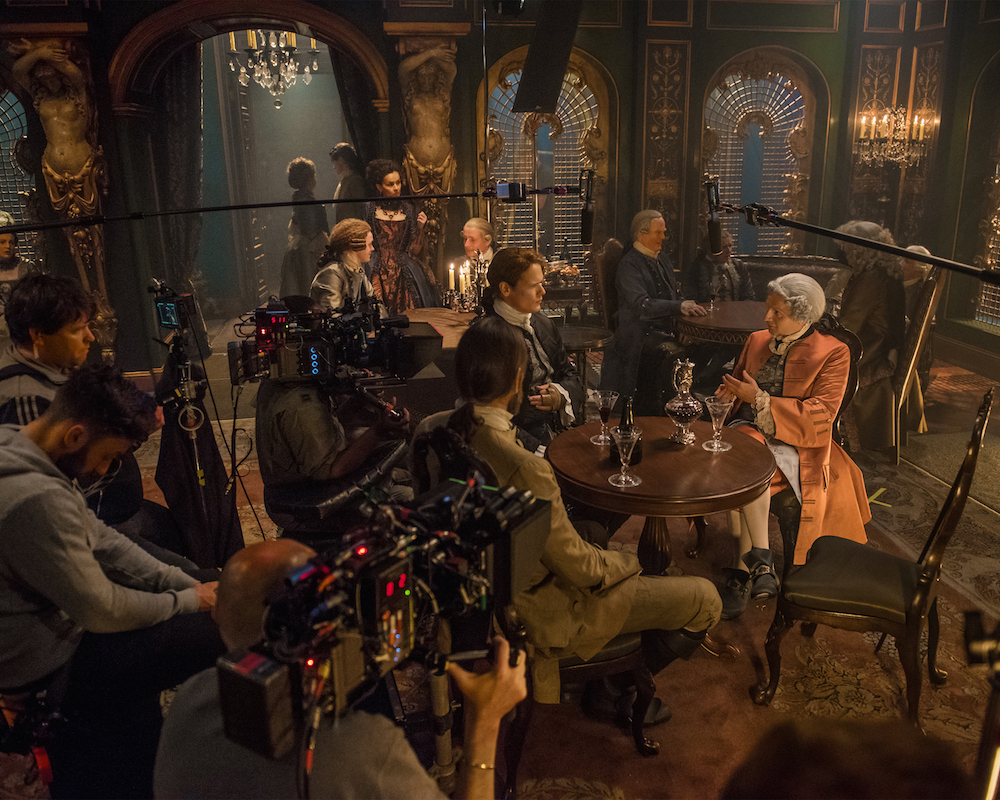 Most of the art direction centered on Claire and Jamie’s lavish apartment— a large set with a courtyard. There’s even a built-in day bed with glass doors on the outside so they could shoot over Claire when she’s lounging.

“To avoid peering at painted drops or trans-lights, we build the whole set up,” Steele continued. “We poured concrete corbels, we had iron balconies built to go all the way around the four sides. And the rooms overlooked the court and the windows were open and people could interact from below and above I also wanted to have carriages coming into this courtyard and drop Claire and Jamie off so we feel like we’re in a real world.”

The ornate brothel (with gilded screens) was like being in a bird cage. In general, most of the rooms have hallways with large openings so they could dolly from one side to the other and track and look through, said Steele: “Everything is lit by fire and most of the sets are dark and when the fires and chandeliers and sconces were lit, the gold moldings popped and it heightened the feel of being in a decadent and opulent place. Versailles was even more over the top.”

For cinematographer Neville Kidd (whose favorite shot of the whole season is the moment in slow-motion where Jamie and the Highlanders break cover from the woods and charge at the redcoats), it was an opportunity to emphasize the sharp contrast yet keeping it natural with no distractions. “We used the lighting to emphasize the change of weather from the wet Highlands to the sunny streets of Paris,” he said. “We wanted the light to reach into the gorgeous rich sets to show off the wealth Paris had at that time. We tried to have no shadows in France again to contrast Scotland. These lighting decisions again came from our show philosophy of trying to keep the look of ‘Outlander’ very real, drawing the viewer in and letting them enjoy a real opulent 18th century France.”

For costume designer Terry Dresbach, who’s enjoyed taking a liberated woman from the mid-20th century and thrusting her into a very male-dominated culture, this was like a fashion show as well as zipping off to another planet. “We have spent a year and a half in the most meticulous, detailed work imaginable,” she said. “And we can’t begin to touch what they did at that time by hand. And I tell people this is why people lost their heads.” 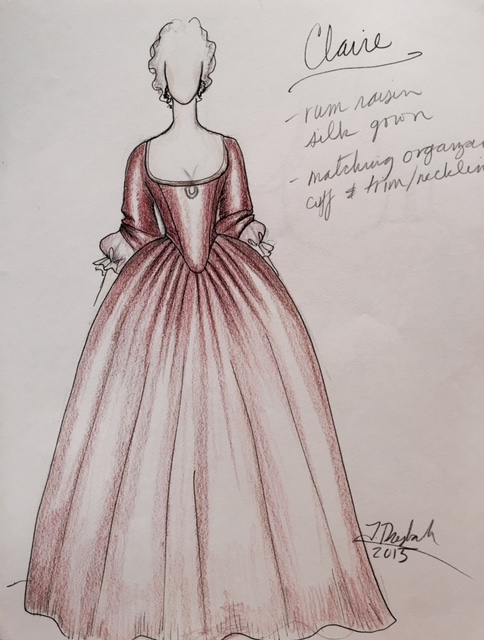 Dressing Claire proved to be a dual challenge. In the first season, Dresbach carefully retained her 1940s identity by putting pockets in all of her costumes so she could move in a very masculine way with hands in pockets, which set her apart in the 18th century.

“So then we had to take that character from 18th century Scotland, which is very rural and very wild, to the French court, which is painfully mannered,” added Dresbach. “How do you lift that cup? How do you stand? And a find a way that she fits in and be accepted yet different. It was a fine line to tread.

READ MORE: ‘Outlander’ Season 2 Episode 1, ‘Through a Glass, Darkly’: So Many Good Men

“We amped up the world around her to add more contrast. I had a scene in mind where she’s with a dressmaker, saying, ‘Keep that stuff off, and remove this, it’s too fussy, get rid of it,’ because her 1940s mind is not going to be constricted with all of those fripperies and follies. We really streamlined her, and her clothing has a real solid, ’40s feel, which is fascinating to do. We make everything! There’s no store that sells 18th century fabric or shoes or hats. And they change an average of seven times a day in the aristocracy.”

While one of Dresbach’s favorites is a tapestry fabric of olive/brown with woven floral pattern coupled with large hat out of “My Fair Lady,” she had fun with the fan fave red dress: “If you’re doing it with accuracy, it was a very expensive color and there wasn’t that much of it around. The dilemma of that was making sure she didn’t look like a saloon girl from the wild, wild west. We kept it very simple with the silhouette of the 18th century… it’s deep crimson, it’s wide, it’s huge, it’s 15 yards of fabric.”

Dresbach had to have special dressing rooms built because Balfe couldn’t get through the dressing room of her trailer: “We made it more dramatic and more provocative. She’s a scandal and using it as an attention grabber.”

This Article is related to: Awards and tagged Awards Season Roundup, Below The Line, Emmys, Outlander