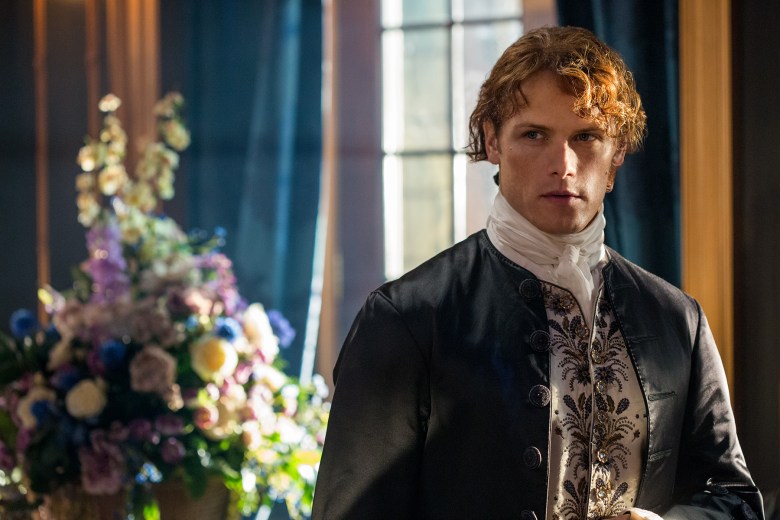 Always a feminist no matter what time period she’s in, Claire continued to experience the repercussions of her unintentional feud against the Comte Saint German, who is clearly still peeved about his boat. As it turns out, even though Claire has been busy trying to stop a war and all, the Comte has been mounting one against her for a while now. First Claire dealt with “poison” (supposedly at his hands) and then an awful rape attempt (also supposedly thanks to his connections). Clearly this is one guy who isn’t going away anytime soon, and could quickly become the new Black Jack of the season if his efforts continue. Anyone who may have felt the season was off to a slow start should certainly be satiated now; it was quite the episode full of twists and turns.

Now that Jamie finally knows his own enemy Black Jack is alive, he certainly has cheered up considerably. While the whole reaction is being played for laughs now (“I don’t know what you were so worried about,” Claire shot at Murtagh), it will obviously become a bigger focal point later in the season when the two reunite — as they must, given everything Jamie has been through. In the meantime, it was nice to have a semblance of the character viewers met back in the first season, who was a little more eager to hop in the sack with his wife. Sixty-nine-ing at the brothel aside, here’s hoping that now that these two have actually talked about their lack of intimacy, it can once again thrive as it did in this episode. After all, viewers are clearly waiting for that romance to kick back in; the character should now have enough closure to get him through for the time being.

Only in this sexually charged version of France could one of the supporting characters get knocked up by her lover and then be concerned about what he would think if she played the kid off as her own husband’s. Louise’s little predicament of carrying Prince Charles’ baby was obviously meant to deliver some lighter tones to the episode before the emotional punches came, and in that sense it worked. Later on, when Charles came stumbling into Jamie and Claire’s home, it all came full circle — Claire put the affair together and she and Jamie attempted to use it to their advantage at a subsequent dinner party. (If you hadn’t thought Charles was a bumbling buffoon yet, you certainly must have after these scenes.)

As for the French wardrobe, let’s just say we would love to get our hands on some of those gorgeous French cloaks the women were wearing in this episode.

Poor little boys, back in Jamie’s time. If Lambert and Dalhousie were the two names on the tips of the protagonists’ tongues, we’d hate to think what the little girls were being named.

Rape scenes on television are hugely contested because of the gratuitous way they’re often portrayed. Many times they’re unnecessary at all. Knowing that this scene was one that was coming up and does have an affect on the overall story (as viewers began to witness with the brawl at the end), it was heartbreaking to watch poor Mary go through that torture. The silver lining is that the scene was relatively quick and didn’t linger on the awful parts, and will hopefully continue serving the story in the weeks to come.

Charles continues to show that he’s a gigantic child, one that can’t even handle a dinner party gone awry — let alone lead an entire country’s rebellion. The fact that he allowed the Comte to call the Gens d’Armes by episode’s end does not fare well for Jamie and his French reputation going forward. Nor does it bode well for the younger Randall, who has clearly captured Mary’s heart and may hold some sort of key as to the future of Frank.

Naturally, Fergus mowing down on the forgotten feast while the adults rumbled was another true highlight. More of this kid, please.

As much as we’d like more Fergus, we’d also like more Murtagh and Fergus together. Their dissection of women and how to tell if they’re in love was pretty much an episodic highlight. It’s a comedic duo that really should be utilized a little more in the future, especially to counterbalance some of the heavy stuff that’s coming up.

When it comes to poisons, the show did a decent job emulating all of the complex side stories from the book, although given how severe Claire’s original poisoning was in the novel, it felt a bit rushed in this episode. Part of her establishing her connection in Versailles was her becoming ill there, as was her refusal of the King’s doctors and their leeches. We also missed the scene in which Jamie was ready to bust in on Master Raymond, when Claire took too long with confronting him over selling the “poison” in the first place. As for Mary Hawkin’s rape scene, that clearly didn’t go down exactly as was showcased in the novel (Fergus fetched Jamie, who didn’t save the day but certainly showed up to escort them all home). Overall these subtle changes don’t make a huge difference to the story (unless you count the fact that Jamie was adamant in an earlier scene that Claire shouldn’t accept rides home from executioners) and stays fairly true to the original plot points presented.

“Outlander” airs Saturdays at 9pm on Starz. Next week: The past comes back to haunt Jamie and Claire.