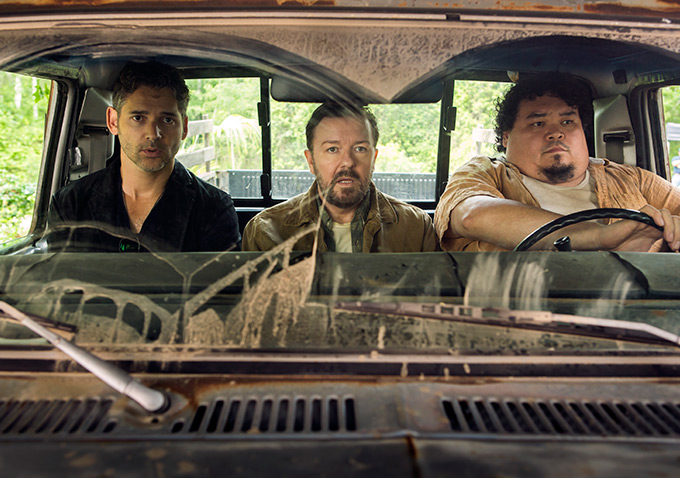 If Ricky Gervais’ amiable but utterly asinine new movie has anything new to say, it’s that Netflix has a bit of a problem. Maybe it’s more of a growing pain, but it’s something they need to address to avoid longterm damage to their brand: To date, their feature-length original comedies have been hot garbage.

For all its brilliant short-form content, Netflix faces a dearth of good movies for its subscribers. A recent report indicates that their online catalog is down to 4,300 features, as they choose to invest in making their own content rather than licensing others’. So far, that’s included two original productions — the first film in Sandler’s four-picture deal, the execrable “The Ridiculous Six,” and the middling comeback movie “Pee-Wee’s Big Holiday” — and “Special Correspondents,” which was an acquisition.

Written, directed, produced by, and starring Gervais, “Special Correspondents” is a sitcom riff on “Wag the Dog,” with its satirical edges sanded away. The self-effacing comedian plays Ian Finch, a radio technician at the third-rated radio station in all of Queens. A kind but hugely unambitious 50-year-old man who has covered several decades’ worth of world events without ever leaving New York City, Ian couldn’t be a sharper contrast from his suave and swaggering colleague, reporter Frank Bonneville (Eric Bana). While he’s been every bit as landlocked in his reporting, he’s a macho braggart who aspires to be the next Anderson Cooper.

When a war breaks out in Ecuador, Frank is desperate to cover it. Lucky for him, the third-rated radio station in all of Queens has the resources to fly a reporter and his trusty sound man to South America, and so they pack their bags and head off to cover the biggest story of their careers. The timing couldn’t be better, as Ian’s unfaithful and hyper-narcissistic wife (Vera Farmiga, spinning silver from a shrewish role) has just decided to bail on their marriage. But when Ian loses the plane tickets and the passports on the way to the airport, what’s a bumbling pair of cut-rate journalists to do with their professional lives on the line? You guessed it: Hide in the attic of the diner across the street from the radio station and use Ian’s equipment to fake the ambient noise of an Ecuadorian ground war. 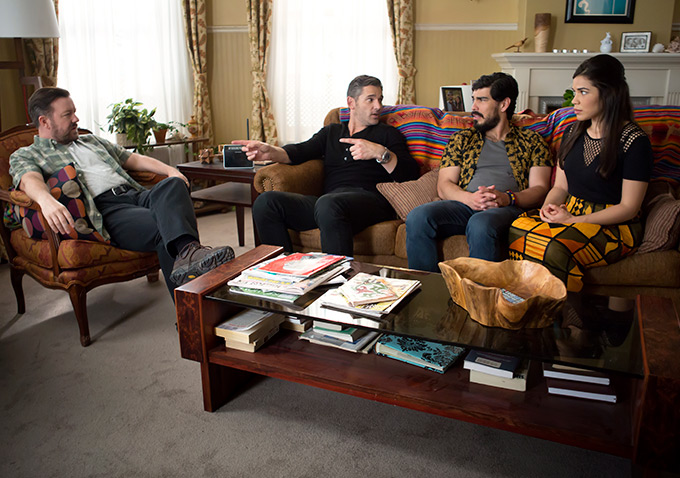 Enlisting the help of the dimwitted Spanish couple (America Ferrera and Raúl Castillo) who run the joint, Frank and Ian begin to broadcast from the frontlines of Astoria’s most pleasant street. The premise, however strained, somehow feels almost as familiar as the character that Gervais embodies; Ian is little more than a sweeter version of the aggravated everyman that he played in “The Invention of Lying” and “Ghost Town.” He’s funny enough, especially when the laughs come at his own expense, but there’s a palpable lack of effort involved in elevating Ian beyond the most rudimentary details of his archetype.

Bana, on the other hand, gets to have a bit more fun — often thought of as a dramatic actor (especially by those who didn’t make it far enough into “Funny People” to see him steal the third act), Bana originally comes from the comedy world, and he slips into this shtick without skipping a beat. Gervais certainly appreciates what Bana brings to the table, but he doesn’t quite know what to do with it; his turgid direction flattens out a number of scenes just when they seem to hit upon their purpose.

At times, that low-key charm feels like a throwback to a more relaxed kind of comedy, something high concept but low profile that doesn’t need a big action scene in order to get made. But so much of the movie feels stuck in the past, from the outdated Honey Boo Boo joke to the fact they never bother to google what’s actually happening down in Ecuador.

“Special Correspondents” falls into a strange limbo; it doesn’t feel classic or timeless so much as it does dislocated from the modern world. Maybe that has something to do with the fact that the film is a remake of Frédéric Auburtin’s 2009 comedy of the same name, or maybe it’s a reflection of Gervais’ hesitancy to sink his teeth into the satirical elements of this story and really take aim at our shamelessly self-serving media climate. “Special Correspondents” is more about smirking sideways than it is laughing out loud, but it doesn’t provoke much of either — it’s one thing for Gervais to subdue his usual bark, but his bite has never been softer.

And yet, “Special Correspondents” might still manage to offend. It’s nothing on par with the boastful racism that Adam Sandler brings to the table, but the film makes it hard to ignore how almost all of its brown characters are egregiously stupid or gleefully homicidal. That trend really comes to the fore once the action shifts down south and you can tell that the verdant Ecuadorian rainforest is being played by what appears to be an abandoned field on the outskirts of Toronto.

Is this the way forward for Netflix? Since the company doesn’t release numbers, we won’t know the returns on their strategy. However, when they’re losing 100 titles for every 10 new ones they add, each individual work is left to assume a much greater importance, and that’s doubly true of the ones branded with the Netflix logo. With original films by Bob Odenkirk and Christopher Guest on the horizon, there’s reason to believe things will get better from here, but they couldn’t get much worse.

“Special Correspondents” premieres this week at the Tribeca Film Festival. It will be released on Netflix on April 29th.