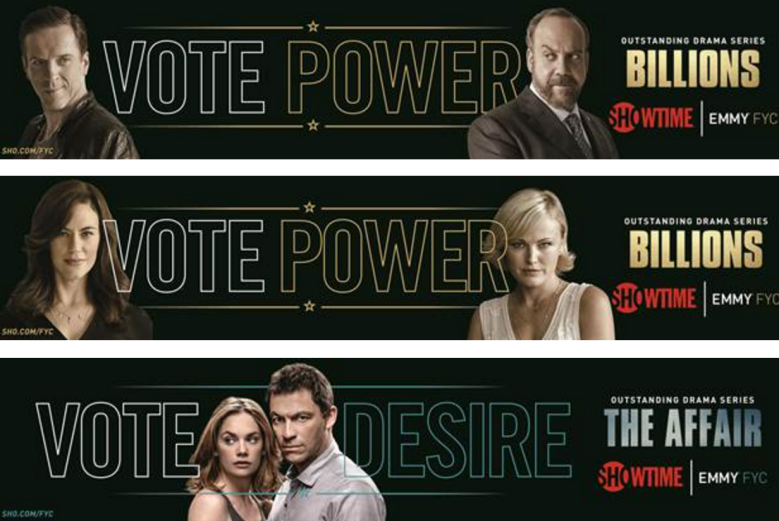 “Vote Power,” “Vote Desire,” and “Vote Loyal” are just some of the messages Showtime is rolling out for its satirical For Your Consideration Emmy ads this week to promote their eligible original programming.

READ MORE: 9 Questions For The Women of ‘Billions’ About Sex, Power, Money and Not Being Just ‘The Wife’

First-time contender shows like “Billions” and “The Circus” are among the faux political posters that ask Television Academy members to “vote.” This propaganda will be seen online and print, as well as on over 100 buses targeting the Los Angeles area. New key art is also expected of Claire Danes and Mandy Patinkin from the award-winning series “Homeland” — so keep an eye out.

“Culturally-relevant programming defines the Showtime brand,” said Showtime Networks corporate communications EVP Trisha Cardoso to The Hollywood Reporter. “Our 2016 Emmy campaign is a nod to this current election year, inspired by our buzzy political series ‘The Circus.’ ‘Vote’ is a call to action in support of the outstanding programming contenders on Showtime.”

And that’s not all! For the first time, the cable network is also giving Academy members the opportunity to access the Showtime streaming service for free until June 30. This will give Emmy voters the chance to catch up on all Showtime series such as “Ray Donovan,” “The Affair,” “Shameless,” “Master of Sex” and more for the duration of the first phase of the voting period.

As networks and studios push for a more digital approach, branded FYC mailers will still be sent this week containing episodes of original programming and select documentaries such as “Listen to Me Marlon” and “Prophet’s Prey.”

Showtime will also host a series of panels for Television Academy and Guild members in LA and NY with the cast and crew of “Shameless,” “Billions,” “The Circus,” “The Affair” and “Ray Donovan.”

Stay on top of the latest breaking film and TV news! Sign up for our Festivals newsletter here.
Check out the “Billions” trailer:

This Article is related to: Awards and tagged Billions, Emmys, Showtime