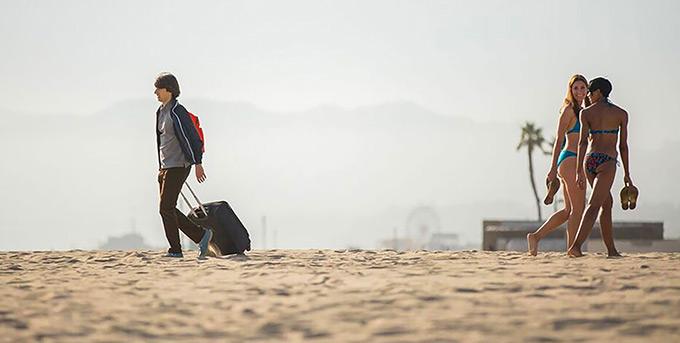 It’s starting to seem like the sixth stage of grief is making a movie about it.

The latest in a recent string of directorial debuts about young people grappling with the imminent or recent loss of a parent, Demetri Martin’s “Dean” may not land with the sheer force of “James White” or offer the exacting detail of Sundance opener “Other People,” but this winsome low-key comedy lucidly conveys how grief can feel like being shot into uncharted stretches of outer space.

The multi-talented Martin directs himself as the title character, an aimless Brooklyn illustrator who’s drawing a blank when it comes to finding material for his second book. Recently single after dumping his fiancée in the wake of his mother’s death, Dean spends most of his time doodling morbid — and very clever — cartoons of the Grim Reaper. He’s adrift.

“It’s the first thing that you’ll never get over,” commiserates one of Dean’s friends, and that sentiment will ring true for anyone who’s been in his shoes — losing a parent is devastating, but the sheer novelty of it can be the most disorienting part of the process. “Dean” may not be strictly autobiographical (Martin’s father died while he was in college, and his mother is still very much alive), and “young” might be a stretch when describing the 42-year-old Martin (the mop-haired comedian could still convincingly play a college senior), but the film still sparks with the authenticity of someone who has lived through a version of this story.

Dean’s widower father (Kevin Kline) isn’t quite having the same experience; he’s bereft, but this isn’t his first rodeo. A retired engineer who sees grief as just another problem to solve, he’s launched himself into the productive busywork of his golden years, buying a new pair of jeans and trying to sell the house that suddenly feels five times too big.

In stark contrast to the likes of “James White” and “Other People,” Martin’s doesn’t force viewers through the ringer of its trauma — Dean’s mother has already been laid to rest by the time the film begins. She exists only as a disembodied memory, preserved in photos and saved voicemail messages. She’s less of a ghost than she is a shadow.

Anyway, it goes without saying that the “Garden State” vibes are strong with this one; painful flashbacks to that film’s famous “wallpaper shot” are inevitable during an early moment in which Dean spies a young boy wearing the exact same outfit as he is. And while most of Martin’s movie errs as close to Woody Allen as it does to the cinema of Zack Braff, that troublingly precious touch is hard to shake at first (the title card is presented in parentheses, and even then it already feels like the movie is hugging itself).

But the film overcomes a wobbly start and begins to find its way when Dean is summoned to Los Angeles by some douche-bro “disruptor” types who want to use his illustrations as part of an ad campaign. Annoyed by his dad’s decision to sell the house (and the ensuing request for his son to come home and box up his childhood), Dean jumps at the chance. The meeting is a disaster, but the trip is salvaged when Dean reunites with an old friend (Eric, played by Rory Scovel) and rolls over to the house party where he meet-cutes Nicky (Gillian Jacobs), a Natalie Portman of his very own.

READ MORE: Why Demetri Martin Decided to Make His Directorial Debut With ‘Dean’

Mercifully far too subdued to ever be confused for a manic pixie dream girl — a trope that Jacobs, who continues to improve everything she’s in, just defenestrated in the Netflix series “Love” — Nicky is never meant to be the solution to all of Dean’s problems, but it’s inevitable that she’ll be forced into that role. At the very least, she gives our aimless hero a perfect excuse not to go back home and confront the crater where his life used to be (the film amusingly casts New York as the city where people go to face their demons, and L.A. as the one where they go to run away from them). Even the cutesy visual gags become stronger once Dean decamps for Hollywood — the sight of Dean tugging his roller suitcase through the sands of a Santa Monica beach is an incisively succinct metaphor for the yoke of depression.

In fact, the film might have been better served by forgetting the East Coast altogether, as some air leaks out of the tires every time it cuts back to check in on Dean’s father and his flirtatious relationship with his real estate agent (played by Mary Steenburgen, increasingly the go-to choice for movie men of a certain age). In theory, splitting this story between the two generations could be a compelling way to explore how the grieving process can run frustratingly parallel between father and son, isolating them both. But Martin never fully commits to the idea, and the dad plot grows too secondary to justify the time it takes to set up and see through.

It’s a typical misstep for a first-time filmmaker, and most of Martin’s sloppiest choices (e.g. a voiceover track that’s both too sporadic and too prescriptive in equal measure) could be described the same way. But Martin compensates for his lack of confidence behind the camera with the ease he exudes in front of it. Dean is defined by the same laconic charm that Martin has perfected across years of television shows and standup comedy specials, and the ease at which the actor steps into his role only further cements the impression that he’s essentially playing himself. But the film works in large part because of how well it negotiates the personal with the general. The lessons that Dean learns are pat and predictable, but this disarmingly winsome film is comfortable in the knowledge that universal truths can be the hardest things for people to discover for themselves.

“Dean” premiered this week at the Tribeca Film Festival where it won the Founders Award for Best Narrative Feature. It is currently seeking U.S. distribution.

Check out Martin in an exclusive clip from “The Last Time You Had Fun,” embedded below: