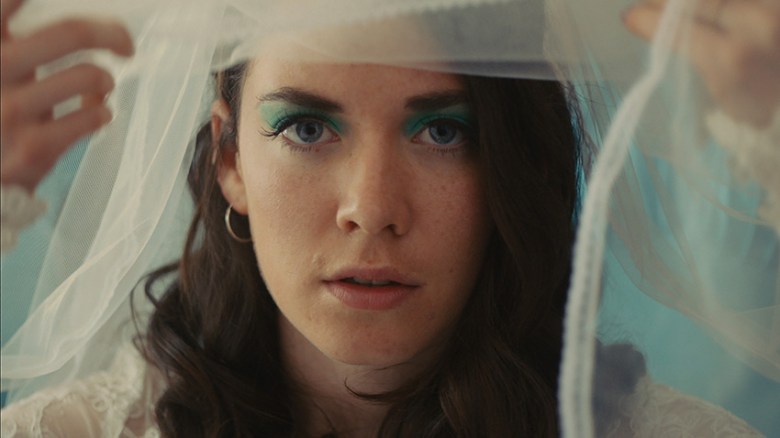 “Madly” is either the work of a true visionary or a shameless opportunist — those are the only conceivable explanations for an omnibus film that boasts a roster of directors so electrically strange and selective. The collection of talent that producer Eric Mahoney has assembled for this loosely related anthology project is as diverse as it is unexpected: An erotic social drama from Indian auteur Anurag Kashyap (“Gangs of Wasseypur”) plows into a postpartum thriller directed by “Alice in Wonderland” star Mia Wasikowska. “Nasty Baby” director Sebastían Silva delivers a short that imagines the interior life of a NYC subway dancer (“Showtime!”), and legendary Japanese maverick Sion Sono responds with a shocking comedy about a family trip to a sex club. Actor Gael García Bernal follows that with a wistful glimpse of a marriage destabilized by childbirth, and — most surprisingly of all — musician Natasha Khan (a.k.a. Bat for Lashes) closes things out with a wedding day tale that feels like the cinematic adaptation of a song from her new album.

It’s hard to tell if this Avengers-like team was carefully curated for a reason or if Mahoney just threw a bunch of darts at the wall to see what might stick. Whatever the case, the beguiling confluence of voices he’s collected results in a refreshingly unpredictable experience. “Madly” may never be quite as exciting as the idea behind it, but that’s only because it’s one hell of an idea.

As with most anthologies the whole is less than the sum of its parts, though it’s hard to say what the whole is here. If not for the instruction provided by the film’s title, it might be difficult to trace the connective tissue that runs through these six disparate shorts. There’s no wraparound story to hold things together (unlike in the “V/H/S” films, for example), nor does there seem to be any rhyme or reason to the order in which they unspool; if “Madly” can be thought of as a mixtape, we’re listening to it on shuffle.

The rules are more flexible than in most omnibus films — rather than being tethered to any particular city or genre, these half-dozen storytellers are only required to operate within the confines of the world’s most abstract force. At one point or another, “Madly” visits several different shades of love, from the familial to the romantic to the forbidden to some wild combination of the three.

First up is Kashyap’s “Clean Shaven,” which is in reference to pubic hair (and not the Lodge Kerrigan film of the same-ish name). A mustachioed virgin has developed a severe crush on his upstairs neighbor’s wife (Radhika Apte), and everyone in their conservative Indian apartment complex is buzzing about it. It’s all fun and games until the kid shows the Kim Kardashian sex tape to his would-be Mrs. Robinson, and convinces her to shave her bikini area. The story sinks from playful eroticism to hard-nosed drama as Kashyap plumbs deeper into the volatile tension that exists between Western mores and traditional values — as with most of the shorts in “Madly,” the segment overstays its welcome, but it nevertheless captures how love refuses to contain itself arbitrarily.

Wasikowska’s “Afterbirth” is a more cohesive and compelling entry, the actress building upon the auspicious short she previously contributed to “The Turning” in 2013. Beginning with a shot of a new mother (Kathryn Beck) submerged in a tub of her own blood, Wasikowska spins a devious tale of postpartum depression run amok that alternately channels the likes of David Cronenberg and Roman Polanski. By the time the story reaches its throat-catching conclusion, Wasikowska stands boldly on her own.

Silva’s “Dance Dance Dance,” sadly not an allusion to the Haruki Murakami novel of the same name, punctures the invisible world of subway dancers by following one of them as he heads above ground and abruptly comes out to his hostile friends and family. Playful in spots and sensitive throughout, Silva’s short is ultimately too fragmented to give its lead character the resolution he deserves, and feels as though it gets off one stop too soon. Fortunately, Sion Sono swoops in to save the day. The elder statesman of the group (despite being an eternal punk), Sono takes us to Tokyo for a perversely hilarious comedy about an uptight family who are all lured into the same sex club. Taking Kashyap’s film to the next level in its gleeful violation of social taboos, “Love Is Love” is an incestuous fairy tale that culminates in a closing image that would make Caligula blush.

It’s a tough act for Gael García Bernal to follow, and “The Love of My Life” proves too elliptical to sustain its time-shifting story of a marriage irrevocably transformed by pregnancy. If only every aspect of Bernal’s sequence were as sharp as the line when one of the leads looks at an ultrasound image and muses “It’s weird to think that that dot will grow up and tell us to go fuck ourselves.”

Fortunately, Khan’s “I Do” ends things on a high note. Starring “Penny Dreadful” actress Tamsin Topolski as a bride whose trip to the chapel takes an unexpected detour into her past, the haunted short trembles with the same rush of raw emotion that makes Khan’s music so intense (perhaps not incidentally, the forthcoming Bat for Lashes album is called “The Bride”). While the narrative isn’t much more linear than that of a music video, Khan’s directorial debut is so palpably haunted by images of undying love that you can’t help but take its vows to heart. The same could be said of “Madly” as a whole. The film, like love itself, is inconsistent and hard to define. The film, like love itself, is also hard to resist.

“Madly” premiered this week at the Tribeca Film Festival. It is currently seeking U.S. distribution.