Tribeca Review: 'My Scientology Movie' Is a Tinseltown Riff on 'The Act of Killing' 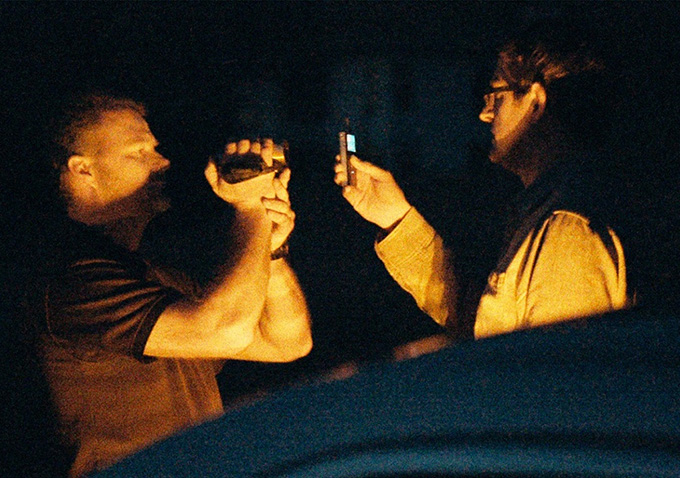 Late at night, alone in the privacy of your most vulnerable and unfiltered thoughts, do you ever entertain the idea that Scientology may not be the one true religion? That’s a rhetorical question (please don’t answer out loud — they may be listening), and — well, yes, of course everybody who isn’t a suppressive person knows that “Dianetics” is the bible of the future and that Xenu brought human life to this planet 75 million years ago planet on a fleet of DC-8 airliners, which he then destroyed with hydrogen bombs and volcano fire. These aren’t the absurd principles of secular propaganda (e.g. “evolution,” “global warming,” and “not being shot”; these are facts.

But like… what if they weren’t? What if Scientology weren’t a system of beliefs geared towards creating “A civilization without insanity, without criminals, and without war,” and was instead an elaborate cult of personality/pyramid scheme engineered to deprive its members of their individual agency and fleece them of their money?

It sounds crazy, but that’s exactly what’s been suggested by a handful of recent documentaries, the most recent of which is “Thrilla in Manilla” director John Dower’s “My Scientology Movie.” This could be a real eye-opener for those viewers who’ve never stopped to consider that L. Ron Hubbard could have been a charlatan. (You get to be the great oracle of human civilization, or you get to have your name printed on the poster for “Battlefield Earth.” One or the other.) For the rest of us, Dower’s film has considerably less to offer.


Remember Alex Gibney’s thorough and unflinching hit piece, “Going Clear: Scientology and the Prison of Belief”? “My Scientology Movie” is essentially that film as it might have been directed by Michael Moore. Dower himself is a non-presence — instead, he casts British documentary broadcaster Louis Theroux as his faux-naïve proxy, preying upon the foreigner’s longstanding interest in strange American subcultures (he published a book on the subject in 2005).

“My Scientology Movie” begins — as most most should — with a tweet: Theroux trawls social media in search of former Scientologists who might be willing to appear in a documentary about the group. In response, a number of people immediately warn him to brace for legal blowback and psychological intimidation. “Don’t go there, big man,” one stranger warns. Presumably, at least some of these people don’t have any personal experience with Scientology — in other words, Dower’s movie starts with the premise that the public is somewhat aware that the Church is up to some shady shit.

Nevertheless, it proceeds at once to be simultaneously both remedial and presumptuous, too hastily establishing its conceit and slowing down only to explain facts about Scientology that could be construed as common knowledge. You’ve seen that creepy footage of Tom Cruise talking about SPs before; if you’re even vaguely aware that “The Master” was rooted in some historical precedent, then you’re already well ahead of the game).

A poor man’s John Oliver (at least based on the evidence presented here), Theroux declares that his dream has been to be “The first journalist to see another, more positive side of the Church.” That the movie half expects viewers to take that claim seriously is one of its funniest jokes — you don’t need to Wikipedia Theroux to appreciate that he’s a self-professed atheist who believes that ethics and religion are dangerously entwined.

Hoping for fireworks, Dower partners this dignified skeptic with the raw id of Marty Rathbun, who served as Scientology’s most fearsome fixer until he was unceremoniously ousted from the organization a few years ago. Together, the two men will stage and film recreations of the craziest things that Rathbun witnessed during his time in the Church, ostensibly to help him better remember what happened.

“My Scientology Movie” may aspire to be a Hollywood riff on “The Act of Killing,” but it lacks any of that film’s intellectual rigor or cinematic vision. As fun as it is to watch Theroux and Rathbun audition a stream of struggling Los Angeles actors to play the roles of Tom Cruise and Scientology leader David Miscavige, Dower’s conceit is flimsy from the start, and the reenactmaents feel as though their more for our amusement than Rathbun’s benefit.

Worse yet, considering Rathbun’s experience with the Church, is how Theroux feigns surprise when Scientologists begin to show an unamused interest in this project. These are some of the most paranoid people in the world — ring a bell and they salivate. Again, this is Michael Moore 101: Poke the bear, play dumb, escape to safety, and then editorialize about the experience.

As things unfold, it grows increasingly clear that Dower won’t be able to make good on the promise of his film’s title. It’s not “My Scientology Movie” out of deference to Gibney’s doc, it’s “My Scientology Movie” because members of the church ostensibly begin making a movie of their own. The shadowy organization appears hip to Dower’s project from the moment that Paz de la Huerta stumbles upon the shoot (it’s a truly glorious scene, even before someone suggests that Miscavige sent the actress as a “honeytrap”).

It isn’t long after that until Scientologists dispatch a video guy to record Dower’s shoot, the opposing crews pointing their cameras at each other to create an infinite mirror of bullshit. Theroux seems convinced that the Scientologists are making an actual feature-length documentary about him, but it amounts to nothing more than wishful thinking when Dower’s film fails to provide evidence in support of that claim. When Theroux openly contemplates whether there might be a “mole” on his team, it plays like a transparent attempt to gin the truth in order to compensate for the banality of his footage.

Each of the film’s soundbites is more intriguing than the last — “Scientologists are good people who are members of a church that has been hijacked by its own pope,” Rathbun concludes” — but Dower doesn’t bother to explore what that might mean. “My Scientology Movie” has no interest in deepening our understanding of this dangerous phenomenon, only in taking what we already know about it and wringing it for its entertainment value.

Theroux ostensibly intends to distill all the wackiness down to the ineffably human qualities that fuel its growth, but really he just wants us to shake our heads at how batshit these sad people are. Scientology is a disease, but “My Scientology Movie” is almost as deceitful as the belief system it’s trying to embarrass.

“My Scientology Movie” premieres this week at the Tribeca Film Festival. It is currently seeking U.S. distribution.