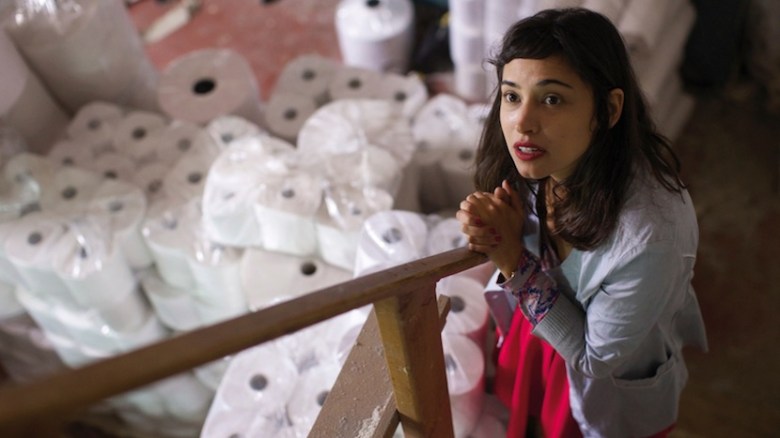 Somewhere, at the edge of the world, a beautiful young woman dreams of becoming the perfect bride. By day, she volunteers at the local toilet paper factory; by night, she brings her work home, obsessively recycling the leftover rolls into a fleet of little dolls that are ready to walk down the aisle (she uses the cardboard tubes for bodies, and scraps of tissue for the dresses and veils). The girl’s overprotective mother often locks her daughter inside their apartment whenever she’s left alone, but the fair maiden is able to slip out on occasion, and often does so in order to sit on the edge of a cliff with her secret boyfriend and whisper to him about their impossible future together. But Hagit (Moran Rosenblatt) isn’t a princess; she’s a mentally challenged girl in a world that’s contemptuous of her innocence.

It could be the premise of an insufferably twee modern fairy tale, and in lesser hands it probably would be. But the bittersweet and gently moving “Wedding Doll” sidesteps so many of the traps it sets for itself because writer-director Nitzan Gilady is less interested in the purity of his heroine than he is in what it reveals from within the people around her. It’s “The Other Sister” meets “Au Hasard Balthazar.”

An ineffably, almost magically pure-hearted girl living in a barren blue-collar town along the upper lip of Israel’s Negev desert, Hagit is as incongruous to her arid surroundings as the azure swimming pool at the nearby resort where her mother works. She’s always smiling, and is pathetic in only the most pitiable ways — her unspecified handicap is one of narrative convenience, less of a hindrance than a halo.

A broadly “simple” girl, she speaks in a hesitant drawl, as though every sentence were a rotating door that she had to push into motion and then quickly scamper through — almost every sentence is punctuated with a smile as wide as the desert that separates her from the rest of the world. If not for her voice, it might seem as though Hagit were simply a stunted kid, endowed with a pre-adolescent understanding of the world and its ways. Despite occasionally sneaking a kiss or two with her secret boyfriend Omri, she appears to know little of sex and its various complications (and while Omri’s affection for Hagit is sincere, viewers are left to assume that he wrestles with the moral entanglements of sleeping with someone who may not be capable of offering proper consent). “Don’t tell anyone,” Omri instructs her, but his friends detect that he’s harboring a crush: “You feel like fucking a retard?” they mock, unaware of the internal conflict they’re causing, or the tender tragedy they’re helping to set in motion.

Gilady is an accomplished documentary filmmaker, and “Wedding Doll” is the work of someone who’s maybe a little too happy to be unburdened from the rules of non-fiction narratives. The fable-esque qualities of Hagit’s nature often seem at odds with the workaday reality of Hagit’s world, and the tension between the two eventually makes the girl feel like something of an autistic Cinderella — like the first of Lars von Trier’s “golden hearts” to actually have an excuse for her pathological innocence. There are, no doubt, people who behave as Hagit does, just as there are toilet paper factories and people who work to keep them clean (although it’s unlikely that they volunteer their services). And yet it’s hard to shake the feeling that Hagit’s handicap is too sweet and pitiable to be real; to ignore how transparently her condition hasn’t been tweaked to maximize her sweetness and our empathy. There’s a fine line between Forrest Gump and Simple Jack, and it’s a minor miracle that Rosenblatt’s immensely winsome performance gives “Wedding Doll” the balance required to walk it.

It’s thanks to Rosenblatt that Gilady is able to trust in the plaintive restraint that keeps his film from teetering over the edge from sensitive to saccharine — the director knows that his star has you in the palm of her hand, and he doesn’t need to do anything to augment the human drama that shines from her face. The plot is simple and organic, and it helps that the handsomely lensed film is decorated with an unobtrusive score that sharply articulates the fragile state of Hagit’s happiness where other movies would use just use music to amplify it. Only during a cruel and jarring third act development does Gilady fail to conceal the manipulative underpinnings of his story, by which point he’s already built such a deep reservoir of empathy for his heroine that it’s tempting to ignore the unbelievability of her trauma.

It’s hard to craft an accurate fiction film around a mentally handicapped hero (particularly when the lead actor is not mentally handicapped themselves), and it’s a sign of social progress and positive screen representations that it’s only getting harder. Gilady has stepped directly into a lose-lose scenario, as filmmakers are forced to choose between incurring accusations of inauthenticity or incurring accusations of exploitation. “Wedding Doll” fails to divine a miraculous solution that splits the difference between those two evils, but the somewhat problematic nature of its means are offset by the optimistic ends to which it applies them.

“Wedding Doll” may be a difficult film to accept at face value, but it’s an even more difficult one to dislike. Rosenblatt’s charisma only grows increasingly radiant and complete as the factory closes and Hagit is confronted with the hostilities from which her job had protected her — by the time she loses her job and the shit hits the fan, viewers are less interested in trying to diagnose what’s wrong with her than they are in making sense of what’s wrong with everybody else. Hagit may be too good for this world, but her plight makes an undeniably compelling case that it’s our responsibility to be better, and not hers to be worse.