6 Ways to Write a Marvel Movie, According to the Screenwriters of 'Captain America: Civil War'

The sprawling Marvel Cinematic Universe — with its multiple superheroes and numerous plots and its copious feature films — is one particularly beholden to continuity, so it’s not a huge surprise that it often returns to the same writers and directors to craft their films. Screenwriters Christopher Markus and Stephen McFeely are MCU veterans at this point, having written all three “Captain America” films (including this week’s opener, “Captain America: Civil War”) and next saddling up to write the supposed final “Avengers” films, set up as a two-parter rolling out in 2018 and 2019.

“Civil War” serves as a bridge between “Avengers” movies past and future: The film sees Captain America (Chris Evans) and Iron Man (Robert Downey, Jr.) and the rest of the Avengers team divided by a government-launched plan to control the superhero team after yet another one of their missions results in some serious collateral damage. It’s a notion that speaks to some of the biggest criticisms leveraged against smash-em-up superhero joints — but Markus and McFeely know that. Indiewire spoke to the pair about the craft involved in writing a massive superhero movie with so many moving parts. Here are some of their tips.

What does one day of writing a Marvel movie look like? “Four or five people who just tighten their belts, sitting around a conference table going, ‘We’ve got to do another one? Holy shit,'” Markus joked. “We tend to start earlier,” McFeely added. “We will generate ideas, possible outlines, remind people of the threads we’ve left dangling that we have to pick up. That just leads to conversations.” Those conversations then spin outward among the think tank that’s working on the pair’s features, including directors Joe and Anthony Russo and Marvel execs Nate Moore and Trinh Tran.

“You talk and talk and talk until there’s an idea you kind of like, and then we might outline that for a little while and fall out of love with it and start again,” Markus said.

“When we’re adapting something, we, at first, don’t give ourselves any limits,” McFeely said. “We pick every interesting thing in the thing we’re adapting. If that’s lines of dialogue, or, in this case, framed of a comic.” They write their specific ideas on notecards. “There’s a ridiculous amount of 3×5 cards spread all over the table,” McFeely explained. “You sort of stare at them until a pattern forms or important moments become evident. We say, ‘Okay, we cannot get through this movie without this thing here’ or ‘That’s so important that it probably is the end of Act II.'”

Not every conceit makes the cut, of course, although the opportunities to use more of them keep coming up. “There are a few ideas that come up every time,” he added. “Before ‘Winter Soldier’ and before ‘Civil War,’ we outlined a movie that had something to do with flashing back to World War II and they’re coming back to the present, and back and forth and back and forth. It’s an intriguing idea that we never do.” 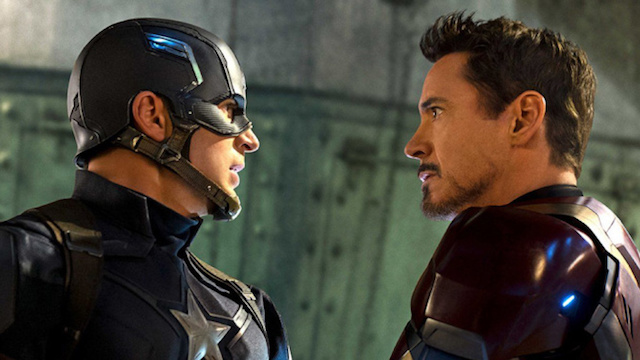 3. Never Write a Movie For the Costume

Once they have the structure down, the pair turn to their characters. “You really need to figure out what’s the worst thing that’s going to happen to your characters,” McFeely said. “What’s the thing that’s surprising that turns the while story around?”

For Markus, “it’s always about the man or the woman inside the costume. Never write a Captain America movie, write a Steve Rogers movie. If you’re writing a movie for the costume, you’re in trouble.”

4. Don’t Bother With Things Beyond Your Control

Markus and McFeely were lucky enough to introduce Tom Holland’s Spider-Man in their “Civil War,” but that wasn’t always a possibility. Rights wrangling was an issue for years, and when Holland (and his Spidey) were announced, it was unclear just how much (or if at all) he could be included in the film. They needed a contingency plan.

“He was in and out,” McFeely said. “You can see by the movie that we created a structure where each side went and recruited somebody. So that allowed for, in worst case scenarios — let’s say, the deal didn’t go through — then maybe we’d go find somebody else or we’d switch a team member or something.” 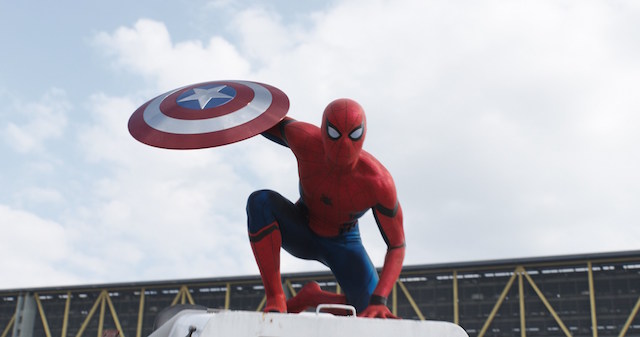 The addition of Spider-Man did, however, allow the writers a chance to have some fun with a beloved character making his entry into the MCU without having to load him up with backstory. Markus and McFeely knew their audience had heard of the character, to say the least — so why bog them down with information they don’t need? “We certainly benefit from the fact that there have been five movies in the last 15 years, so we get to shorthand a lot of his back story,” McFeely said.

The plot of “Civil War” is rooted in a problem that has long plagued superhero tentpoles: What happens when large-scale action sequences lead to large-scale damage? The film’s main conflict is kicked into action after one of these sequences and the team “saves the day” from a big bad, but loses lots of civilian lives in the process. 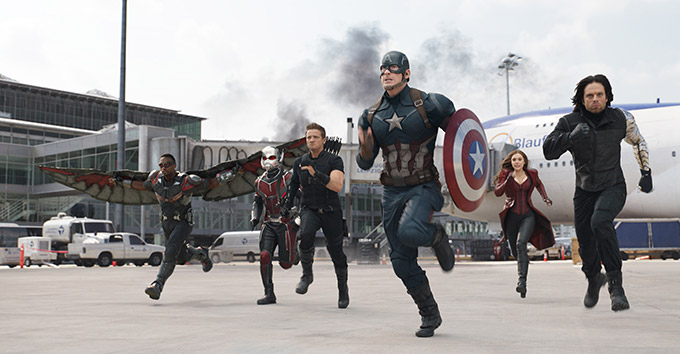 Still, the film needed a humdinger of a second act action sequence, and it gets just that, set at a very obviously empty airport that’s been evacuated of innocent bystanders. “We needed a place that wouldn’t fully violate the concern over collateral damage,” Markus said. “We needed a place that you can evacuate and was a nice, big flat surface where everyone can swing each other around and there it was, the airport.”

The pair knew about the cliché of so many Marvel movies that end with massive things falling from the sky. “We fought very hard for the third act not to be the same thing,” Markus said. “It was going to be smaller and more intimate and more about character — if it destroys you, it’s going to be because of how you feel about the characters, not because a building fell down.”

“Captain America: Civil War” is in theaters on Friday.