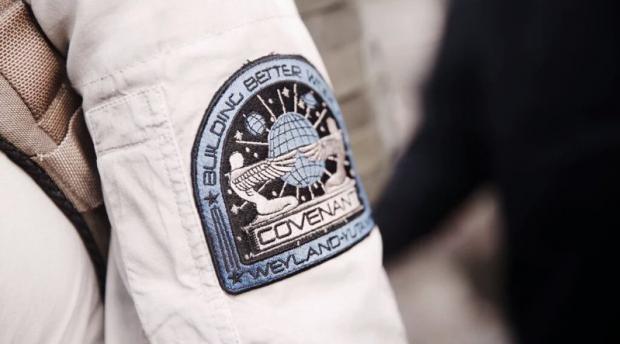 Things are looking pretty rough over on the Sydney, Australia set of “Alien: Covenant.” A new batch of set photos from The Daily Mail show at least one massive intergalactic war zone, filled with literally twisted bodies crying out for help. Covered in ashes and seemingly frozen in time, it looks a bit like a scene pulled right out of Pompeii. Are there volcanoes on this alien planet, or did someone just pop up with a tremendous amount of firepower? Either way, it looks like at least some of the characters present in the newest “Alien” feature are in for a very cruel death.

Other shots show off giant, crushed and cracked stone statues and what look like huge hacked down trees. So, it’s not a feel-good film?
Ridley Scott is directing the new film (alongside his newly-announced attachments Brooke Goldfinch and Catriona McKenzie), will reportedly will follow the colony ship, Covenant, as it is bound for a remote planet on the far side of the galaxy. When the crew thinks it found uncharted land, it will discover that it’s a dark and dangerous world, whose only inhabitant is the “synthetic” David (played by “Prometheus” star Michael Fassbender), the survivor of the Prometheus expedition. The film will also star Katherine Waterston, Demian Bichir, Danny McBride and Billy Crudup.

Head over to The Daily Mail to get a peek. Rough.