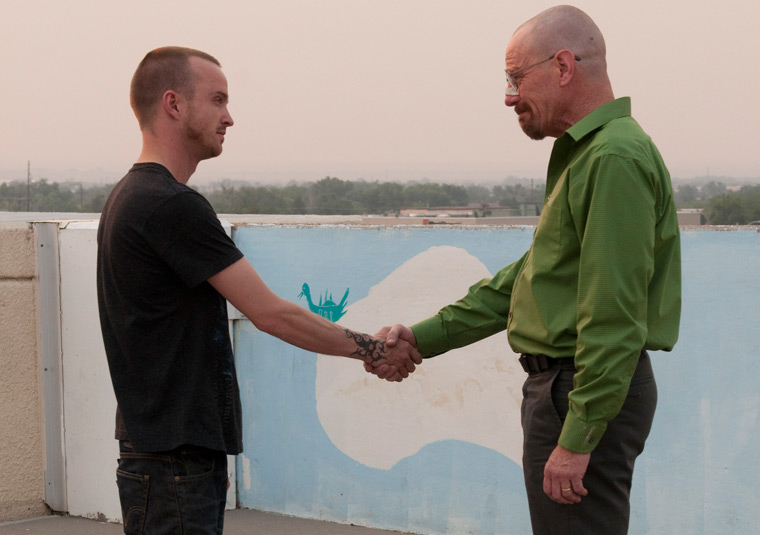 LAST WEEK’S EPISODE: Canceled TV 2016: What Shows Should Be Saved and Which Deserved the Axe

Opening titles are a tricky beast. They have to get the job done, first and foremost, of actually crediting the proper artists responsible for what people are about to watch. But they can’t become repetitive, go on too long or prove boring after a few viewings. There’s an art to building up an audience week after week with the same sequence, and AMC has largely done a great job honoring that art.

Below, the Indiewire TV Team — with guest contributor Steve Greene, Indiewire’s Special Projects Manager — debate which AMC intros are better than the others. “Breaking Bad” or “Better Call Saul”? “The Night Manager or “Rubicon”? “The Killing” or “The Walking Dead”? They’ve ranked them and discussed them in this week’s Very Good TV Podcast, but please don’t let that stop you from voicing your own favorites in the comments below.

Don’t forget to subscribe via Soundcloud or iTunes, and follow Indiewire on Twitter and Facebook for all your pertinent TV news. Check out Liz and Ben’s Twitter feeds for more, more, more. Plus, don’t forget to listen to Indiewire’s other podcasts: Screen Talk with Eric Kohn and Anne Thompson, as well as Indiewire Influencers, hosted by Editor-in-Chief Dana Harris and featuring various guests relevant to anyone tracking independent film or the entertainment industry in general.

Below is our ranking of the AMC opening titles — to learn more about our reasons for this order, be sure to listen to the podcast!

As wannabe cool, cliche and unappealing as the show itself. Props to the singer, though.

In terms of honoring the spirit of the show, this one may do it the best: so much rain, so little payoff. Sadly, that’s not exactly what anyone was looking for in regard to either. Though that last image is gorgeous.

We appreciate the brevity and the punctuation mark intro, but the music doesn’t quite match its early impact and the animation looks a little cheap.

A little on the nose but ultimately compelling, the “Humans” intro blends existing and created footage seamlessly to introduce a sci-fi series with a foot firmly in reality.

Not quite as visually striking as some of the others on this list, but mood-setting for sure.

A good start gets a little lax despite the solid visual style, but the prominence placed on the names themselves works in the long run — fitting and simple.

https://www.youtube.com/watch?v=Nkvf9NW4-cQ
The metaphor works, even time after time — burn it all down to build something new — and the music really starts to pay off for repeat viewings. Plus, it’s a beaut to behold.

Loses a point for the shot of someone eating food at the last second, but otherwise and insightful, artful and straight-up cool take on NY gentrification via food culture.

Some truly great animation blends nicely with a well-placed original tune, lending to a unique intro to watch over and over.

Like a somewhat subdued Bond intro, “The Night Manager” perfectly sets up its espionage thriller time after time.

It’s hard to call these credits, and die-hard fans are likely disappointed Season 2 didn’t start a new cycle, but the choice imagery still carries weight and the overall look fits the show perfectly.

A great score that begs to be a bit shorter nevertheless helps “The Walking Dead” intro leave us eager for what’s coming each week.

Perhaps the best tone-setting intro ever made, “Breaking Bad” gets bonus points for implementing the periodic table into the credits shown after the intro.

Extremely cool and almost too quick with its edits, this one is a pure delight for anyone who remembers the long-ago canceled “Rubicon” fondly. The music could have been a touch bolder, but there’s just so much to like here.

A gorgeous piece of art, the “Halt and Catch Fire” intro feels faster than it is — and that’s a good thing. Moreover, the ’80s synths blend perfectly with a steady beat that builds as we watch the faces of each character streak across the screen. This one’s addictively grand.

We never once got tired of watching this over eight years, even when the conspiracy theories connected to each image became overwhelming.