For the smart actors, the power of a Marvel franchise goes beyond the reach of the film: It’s a magic bullet that allows them to take greater risks with other roles they choose. And Anthony Mackie, who will reprise his role as Falcon in Marvel’s “Captain America: Civil War” (Disney, May 6) two weeks before starring as Dr. Martin Luther King in “All the Way” (HBO Original Film, May 21), is taking full advantage.

“Marvel casts actors ’cause they can act,” Mackie told me, “not because you look good in a uniform or because you look like the way it was drawn in the comic book. Nick Fury was an old white dude in the comic book and it’s Sam Jackson in the movie. They really go about casting actors that can fill the need for the role as opposed to someone who looks the part. We have a lot of women, a lot of colors sprinkled through the cast. The one thing about Marvel is the movies aren’t just fun to watch: The stories are very good and they’re well-acted.”

“The Marvel movies are made like a TV series: it’s always to be continued,” said Mackie. “That’s the thing people gravitate to, because there’s never been a film series like this in the history of films. What I really enjoy and what surprised me about it is people buy into these characters wholeheartedly. They really want to be in this world and are part of his series and they are just clamoring at the bit for this movie. That recognition is what affords you the opportunity to do the HBO movie and the small independent movie. It gives you the ability to do the things you want as opposed to the things you need to do.”

Crucial to the casting of Jay Roach’s HBO Original Film Emmy contender “All the Way” (HBO Original Film, May 21), a cinematic retelling of the Broadway drama, is a Dr. Martin Luther King who can go toe to toe with Tony-winner Bryan Cranston as Lyndon Baines Johnson, hellbent to pass the Civil Rights Act during his post-JFK assassination first term as president. 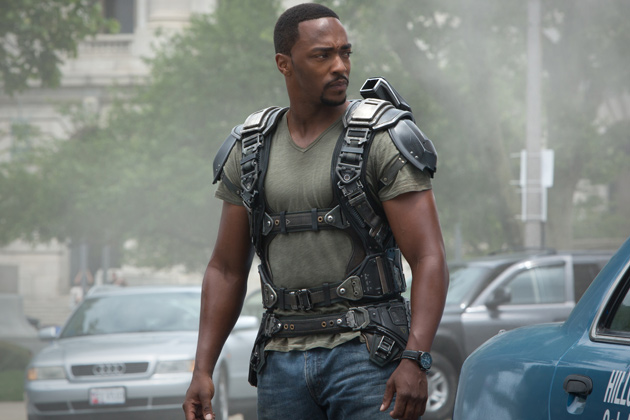 There’s no question this is a powerful Emmy contender: “Breaking Bad” Emmy winner Cranston will be hard to beat for Best Actor in a Drama. And in the running for a Supporting Actor nod is Mackie as King.

When Roach first approached Mackie, the New Orleans-born, Juilliard-trained stage veteran had told his reps that he wanted to step outside the studio superhero box. And he could afford to, with multiple appearances as Marvel’s Falcon flagged in his long-term schedule. But first Roach had to convince Mackie that he could deliver the role.

“I was very nervous, I was very skeptical about playing a legend like Dr. Martin Luther King, Jr,” Mackie said. “I saw the play and was a fan…Dr. King is a legendary figure: he not only meant a lot to African Americans, he meant a lot to the world. When you have somebody at that level of awareness to the world, you have to be okay with the fact that you might not get it right and I don’t think too many people are comfortable with being bad at what they do.”

About two and half years ago Mackie told his agent and manager that he wanted to take some risks. That’s how he got to consider “All the Way,” the George Clooney-produced South American political drama “Our Brand Is Crisis,” opposite Sandra Bullock, and Paul Bettany’s homeless drama “Shelter.”

Kathryn Bigelow was the gamechanger. Before “The Hurt Locker,” his two best-known films were “Half Nelson” and “Eight Mile.”

“People didn’t know where to fit me,” Mackie said. “I got a lot of specific black-guy movies. I learned I was comfortable being led by a woman. Kathryn Bigelow gave me a certain ease and comfort in work I never experienced before. That’s why she was able to get that performance out of me. [Before] I was working from a point of insecurity; my whole goal going to Juilliard and doing Broadway and indie films was I wanted to work to have a career, not a job. When I worked with Kathryn I found this level of comfort and self-assurance and self-reliance where I knew I could do this as a career and I was good at it. She gave me that, it became the jumping off point where we are today in my career.”

After “Hurt Locker” showed what Mackie could do, there were a wide variety of scripts. And he was offered several chances to play King. “But I never read a script that showed me the guy I believed he was,” he said. “My father said, ‘Martin Luther King is a motherfucker!’ Once I became my own man I got it: For a man of his stature to do the things he did, he had to be a man to do that. He wasn’t passive, he was assertive in his approach to the movement and the demand of equality in his relationship to LBJ after Kennedy. When I read this script it was the first time I saw the Dr. King that I knew as opposed to this passive reactionary Dr. King. I thought he was always at the precipice of making the next step. He was always thinking, ‘What’s next, what’s next?'”

After Roach talked him into being willing to take a chance on playing the Civil Rights icon, Mackie read Tavis Smiley’s book “Death of a King,” which chronicled Dr. King for the final year of his life: “It was the first time I saw him as a bull in a china shop. He wouldn’t be denied and that’s where I grabbed the idea of who he was.”

And the actor decided “to capture the idea of Dr. King’s essence,” he said. “I didn’t want to wear prosthetics. I didn’t want to impersonate him and try to talk like him because I thought that would be disrespectful of who he was. I wanted to give an idea, a hint of who he was beside LBJ. Bryan was doing such great work, I didn’t want it to look like a competition: ‘you look like LBJ so I have to look like Dr. King.’ Dr. King was 5’7” and a portly little guy, and I’m 5’ 11” and I’m more elongated. Jay was like, ‘gain weight, gain weight!’, so I tried to put on a little weight for Jay.” 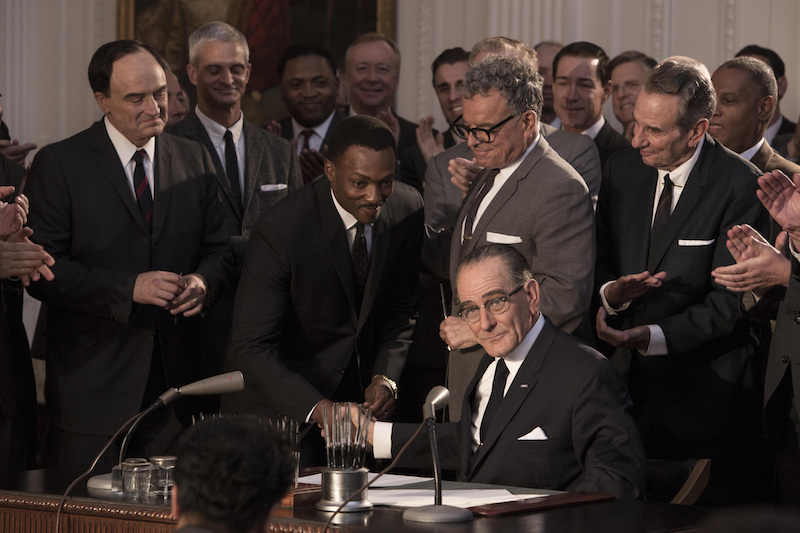 In order to make the movie less like a play, the filmmakers took some material away from LBJ and added it to other characters, including King. “That way, you get a sense of the entire world,” said Mackie. “When I read the script it reminded me of when Clint Eastwood did ‘Flags of Our Fathers’ and ‘Letters from Iwo Jima.’ This movie in that way would be really interesting if you do the LBJ story from his perspective and then do the MLK story from his perspective. They were able to meld those two worlds together really well.”

Where the filmmakers stayed true to the play was in capturing “the suffering and pressure that these two guys were under,” he said. “A lot of people don’t talk about all the stress that Dr. King was feeling. If this didn’t work, the civil rights movement was over. It was going to fall apart. He had rallied the troops so many times and promised to do so many things, and every time they let him down. Now he’s at the point where people are questioning if he is the leader to drive this movement. He was so forward with LBJ because he was making so many sacrifices. He knew that was the only opportunity he had.

“Something Dr. King and LBJ understood was that this was a game of give and take. You can take away voting rights if we get civil rights, because it’s piece by piece. That type of bipartisanship is the problem with politics today.  LBJ had friends on both sides of the aisle. You see it when he’s talking to the Republicans: ‘look, you got to do this for me.’ He knew he was going to lose many friends if he pushed the Civil Rights Act but he did that. That’s what we’re missing today, that compromise, that sacrifice, and that’s why their relationship was so important.”

“All the Way” comes at the MLK/LBJ relationship from a different angle than Ava DuVernay’s “Selma,” which was mired in some controversy. “It’s just a different perspective,” said Mackie. “The characters are portrayed more of a light of their world as opposed to their individual desire. ‘Selma’ was more about a specific moment in time and those people’s need for that moment. This is more about a group of people and those people’s need for that situation to be remedied. Telling a story from LBJ’s perspective is very different than telling a story of Martin Luther King on the bridge at Selma. And the way I perceive Dr. King is very different than the way David Oyelowo perceives him, we’re just two different actors.”

Mackie felt empowered playing King. “He was a great politician,” he said. “He put all of his eggs in the basket with Kennedy and Kennedy never really paid off for him. He promised him a lot but he never really gave him the Civil Rights Bill or the Voting Rights Bill. You look at Lyndon B. Johnson: he was in office for eight months and he took those months to pass the Civil Rights Bill knowing that was the one thing that most likely wouldn’t get him reelected. Believe you me as an actor to put on those shoes everyday was remarkable and it felt good.” 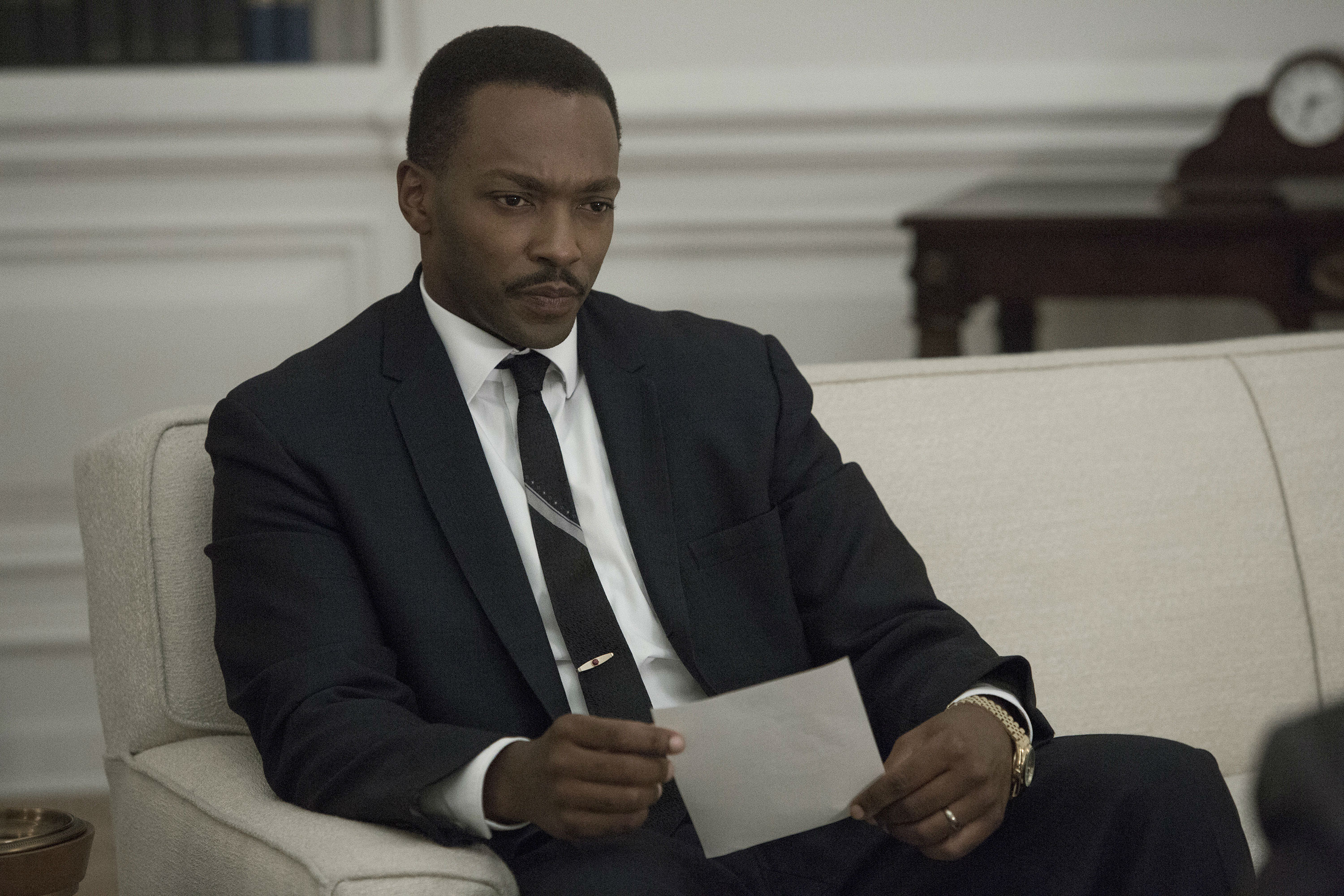 For Mackie, acting “is a game of tennis. If I finish a scene and I know I didn’t drop the ball I feel really good. When I was at Juilliard the greatest lesson my acting teacher taught me was: ‘just listen and the lines will come out of you.’ As an actor you feel that moment where you truly listen and it propels you through the scene. There’s so many times where you learn your lines and you show up on set and you just say your lines the way you rehearsed at home back to them and it can get stale. I feel like there are ways to combat that and let the scene evolve and that aspect of listening is the best way to do that. So when I feel myself truly listening, I get excited.”

Cranston helped him. “There’s a shortage of true leading men today,” said Mackie. “Everybody’s more interested in being a man about town than being a leader on the set. It’s one of the few times I came to set and I knew that the leading man was a leader. It wasn’t so much about him showing off; it was about him showing up prepared and knowing you had everything you needed to succeed.”

His quintessential Bryan Cranston experience came on his last day with LBJ, when he was shooting a telephone scene. Cranston was set to fly off to London to do some “Trumbo” press, so Mackie was going to read with a production assistant. “We come around to do this scene,” said Mackie, “and Bryan walks in and he’s like, ‘I changed my flight to go tonight so I could do this scene with you.’ No one does that.”

This Article is related to: Interviews and tagged All The Way, Awards Season Roundup, Bryan Cranston, HBO