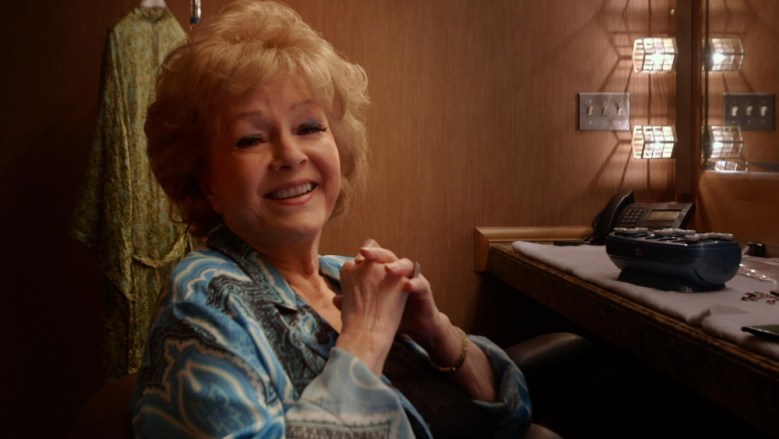 Carrie Fisher has a life-sized Princess Leia sex doll in the attic of her house, but she can’t figure out how it works. Her mother, “Singin’ in the Rain” star Debbie Reynolds, once amassed the world’s largest collection of movie memorabilia before she had to sell most of it in order to pay off her debt. These are two magnificent women who live in the shadows of their own legacies, surrounded by petrified images of their former selves.

Fisher has been in the public eye since the day was born, and her tumultuous private life has always been an open book (two of them, actually), but neither she nor her mother have ever been seen quite as clearly as they are in the casually enthralling new documentary, “Bright Lights: Starring Carrie Fisher and Debbie Reynolds.”

The film is strikingly open from the start, as an opening flurry of home video footage from Fisher’s childhood hints at the degree of access that has been granted to co-directors Fisher Stevens and Alexis Bloom. There’s candid, and then there’s Fisher sitting on a bed with old friend Griffin Dunne as they talk about how he once took her virginity (“I took the pressure off your hymen,” are Dunne’s actual words). Fisher commands the doc like the coolest of confessors, narrating with the confidence of someone who’s starred in a one-woman show about her own life and had Meryl Streep play her in a movie.

If it often feels like Fisher and Reynolds are performing for the cameras…well, when are they not? Reynolds, 83 at the time of filming, still has one foot lodged in show business, stuck to the stage floor as though it’s been there so long that roots have grown around it. Fisher, seen gearing up for “The Force Awakens,” diagnoses Reynolds’ mindset with the savage grace of a daughter and the steeled wit of an aging star: “It doesn’t make sense to her that her body isn’t cooperating. Age is hard for all of us, but she falls from a greater height.”

And hey, it’s not like Reynolds is embarrassing herself out there — the glimpses we’re shown of her one-woman show are alternately funny and poignant. “I should have married Burt Reynolds,” she tells a glassy-eyed crowd of septuagenarians at a Connecticut casino. “I wouldn’t have to change my last name, and we could share wigs.” By the time the audience has stopped laughing, Reynolds has already launched into a stirring rendition of her 1957 pop hit “Tammy,” which reverberates as strongly here as it did in the stunning centerpiece sequence of Terence Davies’ “The Long Day Closes.”

While the Hollywood legend assumes a supporting role in this film (largely due to her increasingly poor health), Stevens and Bloom cut a sharp trajectory of her decline, and make it easy to appreciate how hard this late in life retirement must be. Reynolds is haunted by her own image, a victim of the same uniquely filmic phenomenon that will eventually allow her to survive her own death. There’s a mild element of “Sunset Boulevard” to this story — albeit it in a much sweeter vein — and it’s disappointing that “Bright Lights” doesn’t lean into it a little bit harder, particularly when both of its subjects are grappling with (and brought together by) the afterlife of celebrity.

In large part, that’s because Fisher steals the show, and the film is happy to let her get away with it. The actress is a force of nature, more vibrant and alive here than she’s ever been as Princess Leia. And while Fisher’s battle with bipolar has been well-documented elsewhere, the home video footage of her detailing her two disparate moods — the manic “Roy” and the depressive “Pam” — provides a fascinating window into a woman whose mind is almost as split as her persona. But this is a nice film, nice to a fault, and the bits about Fisher’s past feel included by necessity alone. For every detail about her drug habit or her short-lived marriage to Paul Simon, there are three terrifically entertaining throwaway details about things like Comic-Con autograph sessions (“celebrity lap dances”), her incredible pug Gary (a celebrity in his own right) and her sister-in-law’s emotional support chicken.

On a similarly sweet note, “Bright Lights” outlines the mutual resentments between Fisher and Reynolds, but is also happy to let sleeping dogs lie. If anything, Stevens and Bloom are fascinated by how well-adjusted their relationship appears to be, mother and daughter living next door to each other without ever tipping into “Grey Gardens” territory. They’re still so close, despite everything between them.

“Bright Lights: Starring Carrie Fisher and Debbie Reynolds” premieres this week at the Cannes Film Festival. It will air on HBO early next year.