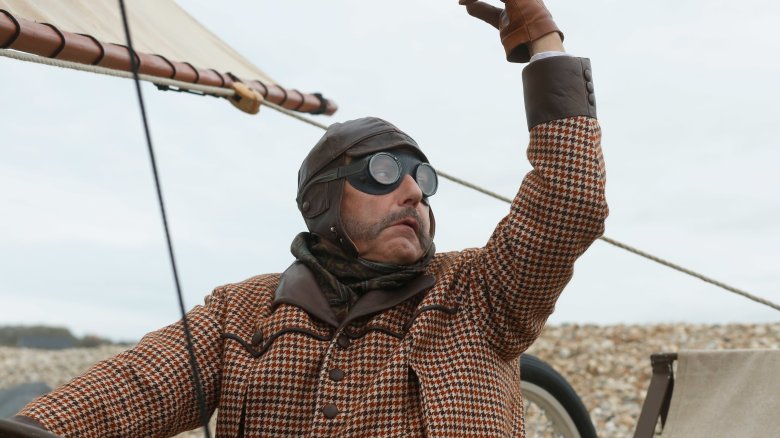 Across his seven feature films, French director Bruno Dumont has always regarded French society with a fair amount of skepticism. Jumping to the outrageous extremes for his eighth feature “Slack Bay,” he gives it the middle finger. A radical shift in tone from the director’s usual patient style, the new movie plays like a madcap, surrealist remix of Dumont’s own “Li’l Quinquin,” which also revolves around a pair of oddball detectives exploring possible crimes in a seaside community. But whereas “Li’l Quinquin” was a disquieting and at times suspenseful drama, “Slack Bay” takes a familiar form of bourgeoisie satire and turns it up to the max, resulting in a fun, if familiar, rebellious gesture.
At the center of its early 20th century setting are two families: High on the hill lies the Van Peteghems’ mansion, where the eccentric relatives waste away their days in luxury. Down below, the Bruforts, a group of ragged fishermen, roam the beach nabbing mussels and helping affluent visitors cross the bay — and sometimes knocking them unconscious, taking them home and eating their flesh raw.
Their cannabalism, revealed early on as a casual punchline, marks only one of several loopy ingredients in the “Slack Bay” universe, where residents frequently fall down for no apparent reason, and sometimes float away. It’s a reality defined by madness and steadily coming apart at the seams.
While not as outwardly depraved, the Van Peteghems have their own peculiarities, which Dumont emphasizes through a hilarious clash of bizarre performances. The family’s patriarch, Andre (Fabrice Luchini), lurches around their property making inane observations about minor things, like the size of an outdoor plant. His wife Isabelle (Valeria Bruni Tedeschi), obsesses over cleaning and cooking; his sister Aude (Juliette Binoche, speaking in a high-pitch squeal as her eyes regularly roll backwards) surfaces to reminisce and fret over past experiences, while his brother Christian (Jean-Luc Vincent) roams the property spouting nonsense.
The lower class residents, headed up by a straight-faced man known only as “The Eternal,” face a different set of challenges. While a pair of bumbling investigators roam the beach seeking to determine the cause of all the missing persons, the Bruforts lurk in the background, largely ignored by their affluent neighbors.
But the two crowds are forced to converge when Billie (Raph), the soft-spoken oldest child of the Van Peteghem household, falls for counterpart Ma Loute Ma Loute (Brandon Lavieville). Early on, the pair attempt to flee their backwards community together, heading out to sea in a rowboat; it doesn’t take long for them to get dragged back. But where would they go anyway?
The limits of the setting in “Slack Bay” speak to its chief concern. Despite the overarching zaniness of this universe, the would-be couple’s developing relationship has a tinge of sadness to it that clarifies the movie’s perspective on the isolating nature of wealth. The two younger actors are the movie’s great discoveries: Newcomer Raph exhibits a tender quality that supersedes the looniness surrounding her, while  Lavieville’s straight-faced expression legitimizes the character’s frustration with his lot in life.
Mostly, though, “Slack Bay” operates as a high farce. Its parodic look at decadent lunatics suggests Buñuel’s “L’Age D’or” by way of Godard’s “Weekend” in its vibrant skewering of social classes. The depraved plot is offset by a recurring commitment to slapstick that, while derivative, often hits its mark.
There may be no greater gag than the pair of bumbling investigators, a perverse riff on Laurel and Hardy comprised of Machin (Didier Despres) and Malfoy (Cyril Rigaux). Wearing bowler caps as they wander the beach and attempt to make sense of the strange setting, they’re ostensibly the Greek chorus for an illogical world, hovering on its edges and offering irreverent commentary when they aren’t stumbling into things and toppling over.
As the movie’s most recognizable face, Binoche only dominates a handful of scenes, but it’s safe to say the actress has never gone to such goofy extremes with a role that basically asks her to let loose. At times distractingly over-the-top, Binoche’s expressive delivery nevertheless serves Dumont’s cartoonish tone well.
Combining savage archetypes with spot-on wit, “Slack Bay” is a fun, peculiar romp with deeper conceits lurking beneath the surface. Shot with a high contrast palette, the movie has a painterly quality that yields a hyperreal quality and makes it Dumont’s most polished work. It also succeeds at lending an air of elegance to the strange proceedings, as if we’re watching characters trapped in the confines of a period-specific painting and slowly growing cognizant of the frame around them. Indeed, everyone in “Slack Bay” is trapped, both by their exuberant desires and social order that puts them in their place.

“Slack Bay” premiered at the 2016 Cannes Film Festival. Kino Lorber will release it later this year.

This Article is related to: Reviews and tagged Bruno Dumont, Reviews, Slack Bay