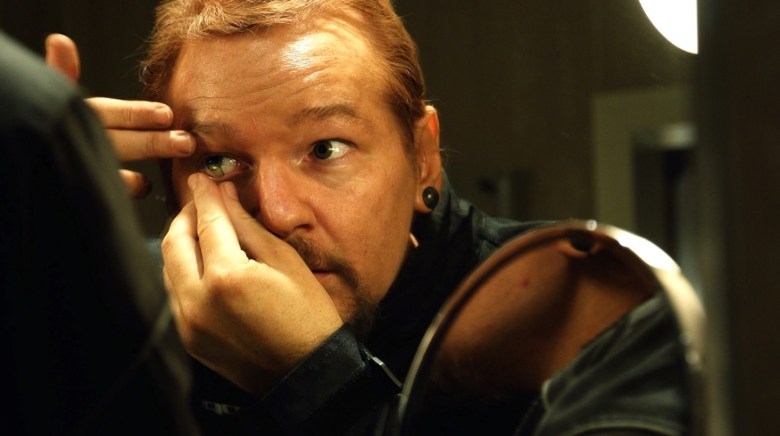 Laura Poitras’ Oscar-winning “Citizenfour” was an object of fascination in large part because it provided a closeup look at events already processed from afar, by sitting alongside Edward Snowden as he made his famous NSA leaks. Her followup, “Risk,” offers similar appeal by operating as a sort of prequel to the Snowden era, with an intimate perspective on WikiLeaks founder Julian Assange in the midst of his site’s biggest disclosures of government documents over the course of half a decade. While Assange has spent the past four years in London’s Ecuadorian embassy, where he found asylum in the wake of sexual assault allegations, “Risk” provides a broader context for the operations prior to that publicized moment.
Unlike “Citizenfour,” there’s not a whole lot here that hasn’t already been revealed through the scrutiny of Assange’s iconoclastic legacy, but the filmmaker’s skillful treatment of the material yields another look at major historical events on an intimate level. A series of snapshots that make the case for WikiLeaks as a serious newsgathering enterprise, the movie won’t win Assange new supporters, but certainly offers clarity to his organization by showing that they aren’t just messing round. Sympathizing with her subject and his radical activism, “Risk” doesn’t deliver the engrossing thrills of “Citizenfour,” but it nevertheless radiates with the same degree of urgency.
Shot over the course of five years and spread across 10 chapters, the documentary unfolds as a scattershot portrait of the WikiLeaks saga. Its earlier passages capture tense strategy sessions between Assange and his closest confidantes, journalists Sarah Harrison and Jacob Appelbaum, both of whom remain unable to enter the United States. Once again working with cinematographer Kirsten Johnson, Poitras captures these characters with the tense, elegant atmosphere of a John le Carré spy novel, maintaining tight closeups on their sullen faces as they talk at length about the governmental revelations at their fingertips. Poitras accentuates this perception with an opening shot, revisited later on, in which Assange dons a disguise by dying his hair and applying colored lenses to his eyes. The filmmaker doesn’t need to stretch the material to enhance its espionage qualities — the subjects take care of that on their own.
But five years is a lot to watch, and Poitras has selected some fascinating bits to showcase the WikiLeaks saga. Notably, “Risk” makes a point of giving equal screen time to its trio of lead investigators, rather than letting Assange’s celebrity lead the show. Early on, Harrison casually dials up the department of defense and asks to speak with Hillary Clinton; in Cairo shortly after the start of the Arab Spring, the energetic Appelbaum confronts Egyptian IT specialists about their roles in blocking online communications during the revolution. “We need a cyberpunk movement that is widespread,” he demands, echoing some of the observations offered up at the start of “Citizenfour,” and it’s clear that his efforts with WikiLeaks got the ball rolling on that front.
Assange, meanwhile, strikes a noticeable contrast to the image of a whiny troublemaker often associated with his legacy (and taken to parodic extremes in the awful Benedict Cumberbatch biopic “The Fifth Estate”). Unusually calm and good-humored, he ventures from public appearances to backroom strategy sessions while spouting ideas about freedom of information. Governmental procedures surrounding overseas incursions, surveillance and other classified matters come and go, but “Risk” places less focus on the object of Wikileaks’ efforts (you can find those online, after all) than the team’s investigative drive. Notably, Pentagon Papers superstar Daniel Ellsberg surfaces at one event to offer his support to Assange’s efforts, positioning them in a grand legacy of institutional revolt.
Piling up one chapter after another in chronological order — with time jumps ranging from a matter of months to years — “Risk” never congeals into a single coherent drama, but it offers an engaging collage of Wikileaks’ resilience against daunting odds. A standout image seemingly shot from a rooftop finds Assange leaving the courtroom after a ruling on his sex scandal, as he slowly drifts away from the building, literally buried by a media mob. Barely digging into the allegations, “Risk” illustrates the extent to which they’ve become a red herring in perceptions of the institution itself. While he’s something of a spiritual guru for the operation, Poitras proves he’s not the only one driving the operation’s continuing relevance.
Making its way to the present moment, “Risk” ultimately arrives in the Snowden era, when Poitras herself became a part of the story for her role in broadcasting his story. A set of FBI audio tapes leaked to the filmmaker feature unidentified voices characterizing her anti-U.S. sentiments, proving that even witnesses are culpable in the information age. So who’s actually innocent?
With Assange in jail, his cohorts unable to go home and Poitras still in the government’s crosshairs, “Risk” ends with a cliffhanger in which nobody’s safe, which only stimulates the team to do its work more fervently than ever before. If it seems a touch unfinished, that’s part of the design. This daring, multi-part narrative will require a sequel.

“Risk” premiered at the 2016 Cannes Film Festival. It is currently seeking distribution.

This Article is related to: Reviews and tagged Cannes 2016, Reviews, Risk