Cannes Review: 'The Neon Demon' is a Twisted Ride of Sex, Blood, and Necrophilia 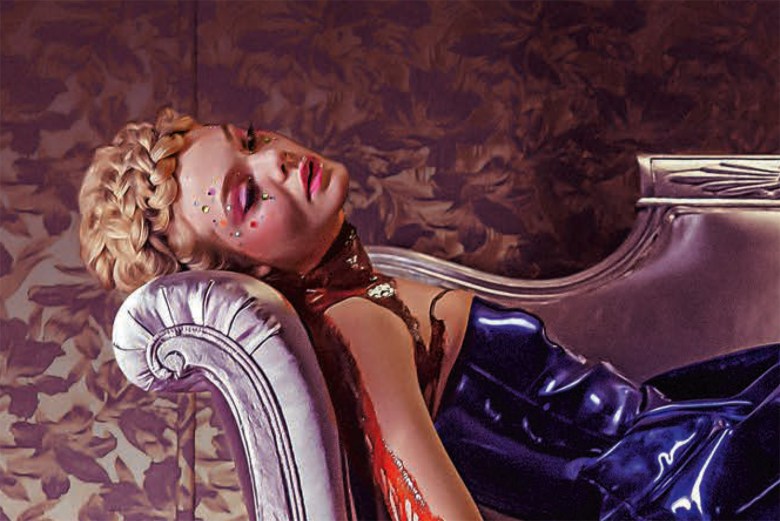 Nicolas Winding Refn’s “The Neon Demon” begins with the initials “NWR” hovering onscreen alongside the opening credits, indicating that the filmmaker has — like Lars Von Trier before him — has become a self-anointed brand. However, “The Neon Demon” represents only a modest attempt to get his snazzy groove back after the drab art-film posturing of “Only God Forgives.” This grotesque, hyperstylized treatise on the fashion industry recaptures some of the zany images and B-movie abstractions of Refn’s crossover effort, “Drive,” though it never quite gels on the same level of inspiration. But, sure, the brand is warranted — elegant, sensual, and blood drenched, this is a genuine NWR film on every level.
READ MORE: The 2016 Indiewire Cannes Bible

At the center of “The Neon Demon” lies a conception of the fashion industry as the snake that eats its own tail. Soft-spoken teen Jesse (Elle Fanning) shows up in a noir-soaked Los Angeles to pursue her supermodel dreams, and immediately finds herself in a menacing netherworld of eerie blue changing rooms, blindingly white photo studios, and catty models, all thin as a rail.

Lording over them, scowling photographer Jack (Desmond Harrington) preys on their eagerness to be selected for his shoots even before the full extent of his misogyny becomes clear. In her sleepy, alienated state (Fanning is a deer in headlights for most of the film), Jesse instantly wows Jack and instantly garners derision from the more aggressive blond models who hankered for the part, particularly the lanky Gigi (Bella Heathcote) and steely-eyed Sarah (Abbey Lee).

She does find some support, including a gentle male suitor (Karl Glusman, “Love”), who basically hangs around and tries to cheer her up, and a quietly seductive makeup artist, Ruby (Jena Malone, a highlight), whose stern gaze belies naughtier intentions. Beautifully captured with a spectacular color scheme underscored by Cliff Martinez’s synth-heavy score, “The Neon Demon” apes the way “Drive” elevated mood to a driving force of the narrative.

Regrettably, however, the new movie also bears a certain resemblance to “Only God Forgives” with its stilted, campy dialogue and the tendency for actors to move so slowly that it’s a wonder they don’t topple over. Gorgeous to a fault (Refn seems to be getting revenge on the commercial world where he sometimes dabbles), “The Neon Demon” occasionally gets weighed down by the superficial gestures of the world it’s designed to indict.

READ MORE: ‘The Neon Demon First Reactions: Walkouts, Yelling at the Screen and a Five-Star Review in Cannes

At least there’s a better story this time around. As Jesse attempts to settle into a seedy motel, she copes with its mysteriously cagey manager (Keanu Reeves, who does mysteriously cagey on autopilot) and suffers from horrific nightmares involving knives and other harrowing forces. She doesn’t need to be asleep for the terrors to find their way in: One night, a mountain lion slinks into her room, and the shadowy menace — reminiscent of the classically creepy “Cat People” — provides an effective allegory for the predatory climate. And that’s before real violence enters into this revenge-fueled tale. 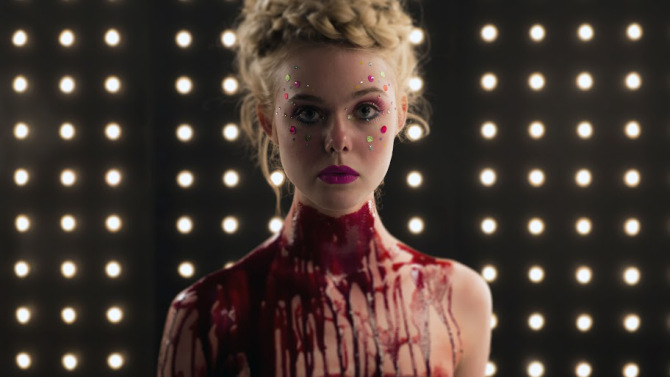 Refn’s chiaroscuro lighting surrounds his alienated women with a creepy aura that recalls “The Virgin Suicides,” though its true antecedent is “Black Swan,” another movie about the perils of prizing the female body. Like Darren Aronofsky’s allegorical drama, Refn twists the horror dial when the material calls for it, but here the results are decidedly mixed.

While always an amusingly twisted ride, “The Neon Demon” is marred by pensive stares and monotone monologues about superficial desires that drag on, and on. Fortunately, Refn treasures shock value over all else, and his movie delivers on that promise with a depraved third act. It’s not the deepest form of exploitation cinema, but it’s reaching for something.

As “The Neon Demon” finds its way to a crazed finale — vomit is the least of the offending twists — Refn maintains a tight grip on his visuals. From a striking shot of Ruby napping in a grave surrounded by flowers to more devious shots of body parts where they don’t belong, Refn keeps pushing to get a rise from his audience. At this stage of his career, he’s not so much an eager crowdpleaser as the extreme genre world’s answer to William Castle, a gross-out showman who certainly knows by now which buttons to push.

It’s impossible to shake the perception of the filmmaker leering at his nubile leads from behind the camera, much as they experience with their photographer. “The Neon Demon” lingers on outrageous sexual deviance, from steamy showers following one grisly incident to a cross-cutting of lesbian desires both real and imagined, all framed with childlike glee. But even as Refn falls into the familiar trappings of the male gaze, that itself is a spirited indictment of the industry propping it up.

“The Neon Demon” premiered at the 2016 Cannes Film Festival. Amazon Studios will release it later this year.

This Article is related to: Reviews and tagged Cannes 2016, Nicolas Winding Refn, Reviews, The Neon Demon