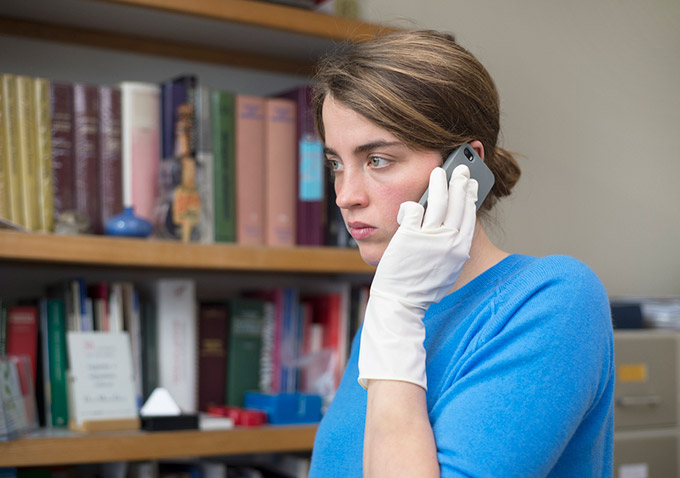 No working filmmakers possess a style as predictable as Belgian duo Jean-Pierre and Luc Dardenne, who seem virtually incapable of deviating from their typical mélange of social realism, urgent storylines and handheld camerawork. “The Unknown Girl,” the brothers’ tenth feature in nearly 20 years, often plays like a reductive version of their best work. Viewed in that context, it might also constitute their weakest film, but even a lesser Dardenne entry contains enough compelling moments to leave a mark.
A simple premise carried along by its central mystery until it fizzles, “The Unknown Girl” revolves around young doctor Jenny (Adèle Haenel), as she searches for answers in the death of a young, black prostitute she failed to buzz into her clinic late one night. Questioning witnesses and acquaintances of the dead woman around town, she follows the bread crumbs to an underwhelming conclusion. But the process of getting there holds a fair amount of intrigue, mainly because the Dardennes are retreading a lot of the strongest ingredients from their previous work.
“The Unknown Girl” combines its naturalistic direction with a strong lead performance and topicality, although these ingredients are hobbled by their familiarity. Like 2014’s “Two Days, One Night,” the new movie focuses on the real-time challenges of a driven young woman venturing from place to place in search of answers from a community divided against itself; as with “The Son,” the death of one character animates the guilty conscience of another one; as with “Lorna’s Silence,” a criminal threat is used to address lower class struggles. The similarities go on and on.
But it’s one thing to shrug off the self-imitative tendencies of the Dardenne brothers and their didacticism; it’s another thing to experience it in the moment. Following Marion Cotillard in “Two Days” and Celine de France in “The Kid With the Bike,” the Dardennes again highlight a good-natured young woman on a single-minded quest. As Jenny, Haenel gives a sturdy, somewhat muted performance, but if her character appears to have little interior life that’s part of the point. Consumed by her care for various patients, she’s almost too immersed in other people’s problems to realize the boundaries of investigating them. So it goes that when a pair of detectives show up at her office asking questions about the dead woman who rang her bell, Jenny instinctively launches her own investigation rather than leaving it to the authorities.
“The Unknown Girl” has the pared-down quality of a Bressonian potboiler, with Jenny as its unrelenting Sam Spade, assailing potential witnesses ranging from a young patient who may have seen the woman (Louka Minnelli) to an old man who may have slept with her, in a search for answers to the identity of the deceased woman and reason for her grim fate. Jenny wields her medical skill like a blunt weapon, taking the pulse of one patient to enact her own version of a lie detector test, and causing indigestion in another as a kind of sly negotiating tactic. As usual, with no music on the soundtrack and rarely more than two characters engaged in tense conversations at any given time, the movie retains an urgency to its suspense even when it runs through the standard tropes.
The rest of the cast, including Jérémie Renier as the child’s protective father and Olivier Bonnaud as Jenny’s equally guilt-ridden assistant, do little more than offer sullen responses to Jenny’s dogged questions. This is Haenel’s show, and while her stone-faced expression limits her range, she fits nicely into the standard tough guy role. The Dardennes usually play with genre, but “The Unknown Girl” might be the closest they’ve come to a straightforward genre film — an investigative crime drama that serves expectations without exceeding them.
Ultimately, “The Unknown Girl” falls short of deepening its subject matter.  The Dardennes establish an intriguing heroine and then pigeonhole her with white liberal guilt. As always, though, that’s the essence of these distinctive filmmakers, and even in this case they demonstrate a unique penchant for recognizing the reality at the root of that cliché.

“The Unknown Girl” premiered at the 2016 Cannes Film Festival. IFC Films will release it later this year.

This Article is related to: Reviews and tagged Cannes 2016, Reviews, The Unknown Girl