Cannes Review: 'The Wailing' Is An Epic Korean Horror Movie Too Crazy For Its Own Good 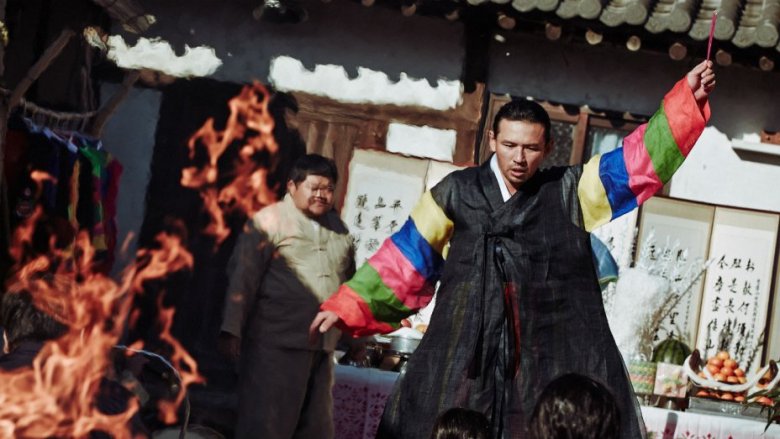 Six years after Kim Jee-woon electrified audiences with his bleak serial killer thriller “I Saw the Devil,” one of his fellow Korean auteurs has replied with a riotously mangled supernatural horror film that asks with an impish grin: “Are you sure about that?” Already a monster hit back home, Na Hong-jin’s spellbinding and scatterbrained “The Wailing” is 156 minutes of demented occult nonsense that gradually begins to feel less like a linear scary story than that it does a ritualistic invocation of the antichrist. Mileage will vary as to whether or not that’s a good thing, but Na’s movie is sure to be a treat for anyone disappointed that “I Saw the Devil” wasn’t meant to be taken literally.

“The Wailing,” as all films about demonic possession should, begins with an excerpt from the Bible. Luke 24:38, to be precise: “‘Why are you troubled,’ Jesus asked, ‘and why do doubts arise in your hearts? Look at my hands and my feet. It is I myself. Touch me and see — for a spirit does not have flesh and bones, as you see I have.'” Jesus, appearing to the most devoted of his flock after his resurrection, tells his disciples that they’re not hallucinating; he’s real, and he’s there. What that bit of scripture has to do with Na’s film only becomes clear towards the tail end of it, but one thing is obvious long before we get there: Jesus isn’t anywhere to be found.

Set in a damp, rural Korean milieu that will be instantly familiar to fans of Bong Joon-ho’s “Memories of Murder,” this nightmare begins early one fall morning when a bumbling cop named Jong-gu (Kwak Do-won) is summoned to the scene of a multiple homicide. That kind of violence may be a rarity in the sleepy village where he is, but it’s not enough to stop a guy like Jong-gu from enjoying a leisurely breakfast with his wife and their young daughter (Kim Hwan-hee as Hyo-jin) before heading out. When our hero arrives at the scene of the crime, he finds the killer — husband and father of the victims he’s slashed to death — standing on the porch of his house, his eyes clouded over and his skin covered in strange boils.

Over the next few days, several similar killings pop up across town, the perpetrators all experiencing the same symptoms. The media blames it all on some toxic mushrooms, while some locals blame it on the Japanese man (Jun Kunimura) who’s just started living in the woods on the outskirts of town — they lovingly refer to their new neighbor as “the Jap,” his country’s colonialist legacy still fresh in their minds. The accusations start seeping into Jong-hu’s dreams, his sleep haunted by visions of the foreigner eating a deer carcass and chasing after him with fiery red eyes. Jong-hu’s waking hours aren’t much better: A kooky woman named Moo-myeong (Chun Woo-hee) throws rocks at his feet and warns of imminent disaster. A few days later, his daughter develops a rash — a rash that evolves into seizures and proves so persistent that Jong-hu is convinced to hire a shamanist priest (“Veteran” star Hwang Jung-min) to perform an exorcism. Chaos reigns.

“The Wailing” boasts all the tenets and tropes of a traditional horror movie, but it doesn’t bend them to the same, stifling ends that define Hollywood’s recent contributions to the genre. The film doesn’t use sound to telegraph its frights a mile away (there are no jump scares, here… well, maybe one), nor does it build its scenes around a single cheap thrill. On the contrary, this is horror filmmaking that’s designed to work on you like a virus, slowly incapacitating your defenses so it can build up and do some real damage. There’s a looseness here that’s missing from mainstream American horror, a sense that absolutely anything can happen next (and always does).

But while Na expertly delivers one spine-chilling moment after another, they ultimately sludge together into nonsense. Filmmakers love stories about possessions because they let them do whatever the hell they want; there are no rules to these things. That’s a dangerous proposition for someone like Na, whose rambling, ragtag movies — particularly “The Yellow Sea” — tend to work themselves into such a lather of nonsense that they eventually lose sight of where they started. A lack of discipline isn’t Na’s biggest flaw, it’s his brand, and “The Wailing” is his biggest sandbox to date. Told with a laconic rural energy and an oil slick of black humor, Na keeps this tale set to a steady simmer for nearly two hours before taking the lid off the pot and twisting up the dial until scalding hot water is spitting out in every direction; there’s no doubt that he’s having the time of his life.

There’s no denying that “The Wailing” is more fun once the shit hits the fan (which it does during a magnificently deafening sequence in which the film feverishly cross-cuts between good and evil), but Na is so eager to get to dessert that he blows right past dinner. Once again, he’s made an unwieldy epic that works itself into such a rabid madness that its pleasures become unstuck from each other.

So much of this movie hangs suspended over the pit between the real and the supernatural, and so much of its suspense is derived from playing with how long the characters — and, by extension, the audience — can find rational explanations for the horror that’s happening to their village. his is a story about people who are desperately trying to make sense of how, and why, these awful things are happening to them. “The Wailing,” for all of its scares, is less gripped by terror than it is by despair. The Chinese characters that comprise the film’s Korean title literally translate to “The sound of weeping,” and that’s an accurate way of surmising the desolation that haunts this movie like a vengeful spirit.

There’s a terrible helplessness about the devil coming to town and saying “touch me and see.” But when that helplessness begins to assume a life of its own, Na blindly scampers after it into the woods, abandoning his film’s emotional core, along with its inner logic. While the last hour is a fun comedy of terrors, full of grim sight gags (e.g. vomit — lots of watery white vomit) and woeful miscommunications, it starts to feel like Satan is just playing with his food. After two hours and 40 minutes, it’s extremely underwhelming to be left with the table-scraps of a better movie. Still, Na’s doozy of an ending carries a potent moral: It’s bad to see the devil, but it’s much worse when the devil sees you.

“The Wailing” premiered at the Cannes Film Festival last week. It opens in theaters on June 3.

This Article is related to: Reviews and tagged Cannes 2016, Well Go USA