Cannes Review: 'Wrong Elements' Is 'The Act of Killing' for the Ugandan Civil War 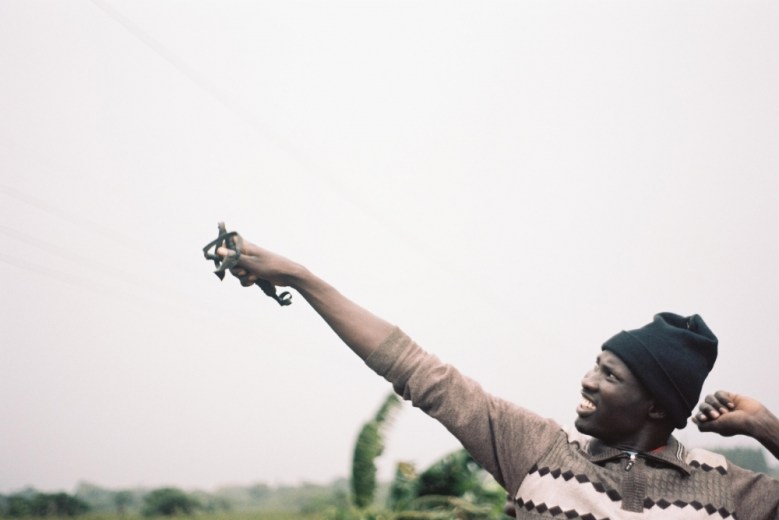 Picking up where “Beasts of No Nation” left off, Jonathan Littell’s exhausting but immensely powerful “Wrong Elements” rips Uganda apart by the ribcage in order to shine a light on the wounded soul of a country that’s been fractured by its ongoing civil war. Following (and encouraging) former child soldiers of Joseph Kony’s Lord’s Resistance Army as they revisit the sites of their most evil moments and re-engage with the horrors that they’ve buried in the deepest valleys of their hearts, Littell’s documentary is broadly informed by “The Act of Killing.” Unlike the aging killers in Joshua Oppenheimer’s seance for the ghosts of the Indonesian genocide, however, these men (and women) are not proud or boastful of their pasts. These people didn’t choose to be a part of an insurgency that has resulted in the deaths of more than 100,000 innocent civilians. These people were kids, abducted from their homes during their formative years and forced to fight at gunpoint. These people are why it’s important to make the distinction between Dr. Frankenstein and his monster.

Littell, a novelist with a long history of humanitarian aid in war-torn places across Africa and Europe, consistently makes it clear that he’s more interested in the psychological fallout from Uganda’s horrible recent history than he is in the politics that primed the country for such violence. An opening title card succinctly lays out all of the context that viewers might need: “In 1986, Yoweri Museveni took power in Uganda, bringing peace to the south but triggering rebellions, both military and mystical, in the north. By 1989, a young Acholi guided by spirits, Joseph Kony, had formed a rebel movement: The Lord’s Resistance Army. The LORA soon began recruiting by mass abductions of adolescents.”

In addition to instilling his film with a certain focus, the lack of information that Littell provides also speaks to how little his subjects knew when they were ripped from their homes, given a machine gun and told that they would either kill or be killed. These kids may have been familiar with Kony’s name, in much the same way that a contemporary American 10-year-old would likely be able to identify Donald Trump, but they didn’t have the luxury of knowing the reasons behind the genocide that had been given to them.

Littell structures “Wrong Elements” with a novelist’s logic and patience, grouping his subjects in sweeping movements rather than in discrete blocks. The film ebbs and flows, meandering towards and away from its most interesting moments — this isn’t a river flowing downstream so much as it is disturbed bath water sloshing about. An introductory passage in which two former LORA soldiers recreate an abduction (pretending that tree branches are guns) gives way to a hollow-eyed twentysomething named Evelyn, who sits on the ground and thrashes a stalk of peas against the dirt as she opens up abut her 12 years in the bush. She says that the peas help her remember.

60,000 adolescents were abducted by Kony’s army, and only half came out alive. How did they grow up? How do they reintegrate into society? Enter Littell’s most fascinating subjects: Geoffrey (a lanky motorcycle taxi driver with a wide smile), Michael (his less regretful friend) and Nighty (who was involuntarily made one of Kony’s brides when she was only 13, and has since been raising the child that resulted from being raped by the shamanistic warlord). Littell coaxes this trio to retrace the steps they once took, returning to the vanished remnants of their old base camp. They walk, casually recalling the first person they killed, or their dead friend Abel who was shot because he had anal sex with a young boy. And they laugh; Geoffrey even laughs as he discusses his kidnapping. They refer to Kony as “Our boss,” and think of their former selves as employees — this, of course, is the story of every genocide. Michael, who’s almost wistful about his time as a child soldier, offers a new wrinkle: “Kony opened our minds by starting the war,” he says, adding that he’d be willing to reenlist.

READ MORE: How ‘The Look of Silence’ Uses Art to Spread Activism

Would they discuss these things without being prompted to do so by Littell’s camera? It’s hard to say. Whatever the case,  “Wrong Elements” — in stark contrast to the more punitive “The Act of Killing” — ostensibly pushes these pasts back into their pasts in the hopes of helping them to heal. They were children, open wounds, and the blood on their hands has indivisibly mixed with their own. On the other hand, the nature of the atrocities committed by Oppenheimer’s subjects (and the fact that those men are still in power) absolves the audience of any ethical misgivings they may have about the trap his film lays for them.

The value of Littell’s ploy is more ambiguous, and the first-time documentary director is a bit reckless in how he induces catharsis from the tortured souls who agreed to appear on camera. Perhaps they were desperate for someone to come along and shove them into the deep end of their memories, but their own moral uncertainty is obscured — not clarified — by that of the filmmaking. When Geoffrey finally resolves that “We did a lot of mess” after Littell ambushes him with a leading question, you can’t tell if his guilt has crystallized into a new understanding of his actions or if he’s just responding to another situation in which his options are painfully limited.

But if Littell’s methods lessen the impact of his findings, “Wrong Methods” nevertheless coheres into a viscerally palpable plea for absolution. The film is clumsy about how it shifts its focus to a notorious LORA commander who surrenders to authorities while Littell is in town, but the man’s need for forgiveness richly complements Geoffrey’s confession. Even more powerful is what the documentary finds when it returns to the woman from the beginning — no longer thwacking peas against the earth, she’s graduated to a mystic ritual in which a shaman attempts to transfer the evil spirits inside of her into the head of a goat, whose blood she drinks from a goblet after the animal is decapitated on camera. Did Littell agitate the darkness inside of her, or was she already desperate to void herself of the atrocities she once witnessed? It ultimately doesn’t matter. “War is supposed to get rid of all the wrong elements in society,” states an opening quote from Ugandan spirit leader Alice Lakwena. It doesn’t appear to be working.

“Wrong Elements” premieres this week at the Cannes Film Festival. It is currently seeking U.S. distribution.

This Article is related to: Reviews and tagged Cannes 2016, The Act of Killing