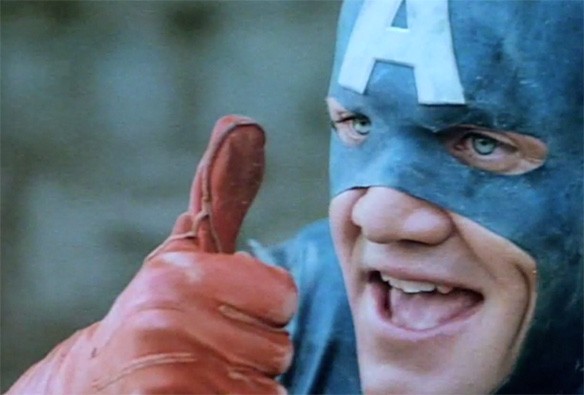 For more than four years now, the Honest Trailers series of YouTube videos has aimed to show movies as they really are. For its latest takedown, the Screen Junkies–hosted series looks back in time to 1990’s “Captain America,” described by the narrator as “a movie so bad it wasn’t even released in theaters.” How times have changed — just 26 years ago, Marvel’s attempts at bringing their iconic creations to the silver screen were low-budget parodies of themselves.

In an inverse of the current dynamic, DC Comics ruled the multiplex at this point: Batman and Superman were the subject of two highly successful screen franchises. The trailer doesn’t let this go unnoticed: “Man, they’ll never get this character right,” the narrator says of Captain America, “unless DC buys the rights.” In its current incarnation, the Marvel Cinematic Universe has grossed more than $9 billion and is seen as far outpacing DC’s attempts to catch up.

Played by Matt Salinger, this Cap “isn’t a captain and spends very little time in America.” As you’ll see, that’s only the beginning of his misadventures.

This Article is related to: News and tagged Captain America, Honest Trailer, Marvel