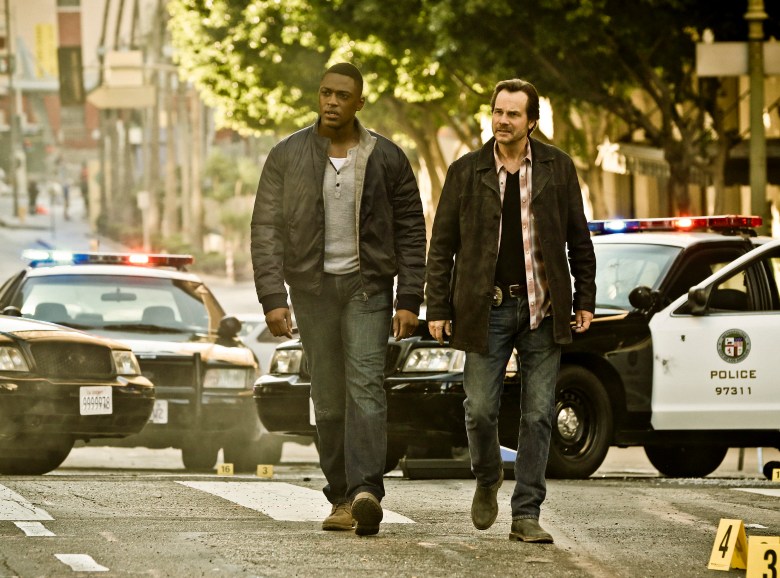 Synopsis (per CBS): “A newly retired police officer looks forward to spending more quality time with his wife and three kids only to discover he faces much tougher challenges at home than he ever did on the streets. Kevin James stars in ‘Kevin Can Wait,’ this Fall on CBS.”

Trailer Critique: Kevin James making unsolicited prostitute jokes, fat jokes and hating on hipsters? Yup, this is what we expected. No, that is not a good thing.

Trailer Critique: His name is Dr. Bull. He hates lawyers. He thinks he’s smarter than a lawyer because he has some sort of magic matrix. He’s like “The Mentalist” except he rigs juries, and we just saw how that’s really done on “The People v. O.J. Simpson.” This is not that. This is a bunch of bull.

Synopsis: “A young silicon valley tech titan enlists the aid of a veteran surgeon with a controversial past in establishing the high-tech hospital of the future. Pure Genius stars Dermot Mulroney and Augustus Prew. Coming this Fall to CBS.”

Trailer Critique: An oddly-paced trailer that starts off super slow and never really recovers, “Pure Genius” is aimed to tug at your heartstrings — which it does, briefly — but the case-of-the-week structuring carries less appeal because these two leads don’t spark. I like Dermot Mulroney, but Augustus Prew is going to have step it up — pronto. They had over five minutes to prove why these two should carry a show, so this series is already on life support.

Synopsis: “An adventure reporter must adapt to the times when he becomes the boss to a group of millennials in the digital department of a famous outdoor magazine. Joel McHale stars in The Great Indoors. Coming this Fall to CBS.”

Trailer Critique: An entire series built around Joel McHale making witty retorts needs to have better jokes than this, especially when they already made it. It was “The Soup,” and it looked a lot better than this. “Community” fans, try not to cry.

Synopsis: “Based on the hit feature film, this crime thriller begins 15 years later when an idealistic young police officer is appointed to an elite squad of the LAPD and he is partnered with a seasoned yet morally ambiguous detective. Starring Bill Paxton and Justin Cornwell, ‘Training Day.’ Coming soon to CBS.“

Trailer Critique: On the one hand, it’s certainly not a retread of the movie. On the other, it looks like it’s just using the Oscar-winning film as a cheap marketing stunt for another cop drama about going beyond the law. Still, at least Bill Paxton gets to be on TV every week. It’s hard to get too angry about that.

Synopsis: “At the CBS Upfront presentation at Carnegie Hall in New York on May 18, CBS unveiled the logo for the new STAR TREK television series within the first-ever promotional video for the highly-anticipated program.”

Trailer Critique: There’s not much to critique, here, sadly, but unlike some of these other trailers, “Star Trek” gave us no reason to worry. Sometimes simple nostalgia is your best bet.

Synopsis: “A secret agent unlike any other, MacGyver escapes perilous situations with nothing but a paper clip, his trusty knife and his wit. A dynamic reimagining of the hit TV series, this action-packed origin story follows a young hero as he undertakes missions to save lives and change the world. MacGyver stars Lucas Till “

Trailer Critique: One of two brief trailers in the lot, “MacGyver” may have benefitted the most from its shorter time frame. Lucas Till looks to be a winning choice to play the legendary son of MacGyver Sr., and the visuals of this episodic hour-long drama look to be a bit above average. If they can realistically impress us from week-to-week with inventive gambits — or at least make us laugh — “MacGyver” Jr. could be okay. At the very least, this trailer actually works.

Synopsis: “A contractor, whose wife goes back to work, starts spending more time with his kids and discovers the truth every parent realizes: his little angels are maniacs. Matt LeBlanc stars in Man With A Plan, this Fall on CBS.”

Trailer Critique: Okay, okay. Maybe, in premise, “Man With a Plan” is just as dumb as “Kevin Can Wait” looks to be. Maybe we should be worried that Jenna Fischer has already dropped out. Maybe we already know that this is going to be, at best, a guilty pleasure. But damn it, Matt LeBlanc is just too hard to resist. Seeing Joey be a dad? Come on! Who doesn’t want to watch that?