Gillian Jacobs on 'Love,' 'Community' and What Drives Her 'Actor Brain' Crazy (Consider This)

After years of living on the bubble with “Community,” Gillian Jacobs encountered a whole different experience with Netflix’s “Love”: The promise of a second season. “After six years of constantly wondering if ‘Community’ was going to be cancelled, the prospect of doing a show [with] a two-season pick-up before we even started shooting was just so exciting to me,” she told Indiewire. “To have that kind of pressure lifted.”

The role of “Mickey” in “Love” came during one of those uncertain moments, just after “Community” was canceled “for the first time.” Jacobs had just been cast as a guest star on “Girls,” executive produced by Judd Apatow who is also behind “Love.” And although Jacobs can’t confirm whether “Girls” led to “Love,” the timing did seem to work out.

From the beginning, Netflix’s two-season commitment meant that — unlike “Community” — Jacobs was far less anxious on the set.  “I think we all had so much fear about what was going to be our lives after ‘Community’ ended,” she said. “And so I was so shocked that that question was answered for me so quickly and with such a great project. It couldn’t have come at a better time.”

When we meet Mickey, she’s in the midst of a downward spiral, which a newfound relationship with awkward Gus (Paul Rust) won’t necessarily fix. The show is inspired by the relationship between Rust and writer Lesley Arfin, who created “Love” with Apatow.

Jacobs spoke to Indiewire as she started shooting Season 2 of “Love,” even though Season 1 had just premiered. “Yes, I know. It’s the weird schedule of Netflix,” she admitted. “I had to make sure that I grew my hair back out to the same length. That was my number one priority, because I got a haircut in between seasons. But it’s been really fun!”

Because the production does a fair amount of cross-boarding, Jacobs said the show was shot “like a movie.” Depending on the director, “Love” episodes have been filmed two-at-a-time, while others were shot straight-through. Jacobs spoke to us about what drew her to the character of Mickey, the influences behind “Love” and adapting to the show’s filming process:

I don’t think I’ve ever talked to an actor who’s like, “Oh, yeah. I love it when we don’t shoot in continuity. I love bouncing around.”

[laughs] I mean, it certainly is great when you have had the experience of shooting the scenes that come previously, so when you’re referencing things, you’ve already shot it. That’s always the danger, when you’re shooting out of order, and then you shoot the previous scene and you’re like, “Oh, I played it totally differently than I thought it would. Would that still make sense?” I don’t know that it makes that much of a difference to the audience generally. But sometimes it drives your actor brain crazy.

You have to rely really hard on the director in this situation.

Yes, totally. But sometimes, even if you all have a sense of how a scene is going to play on the day, it ends up going differently than everyone imagined. There are things that no one can really anticipate, until you shoot it.

It seems like that’s something that happens especially on “Love.”

That’s a nice thing about working on a show produced by Judd Apatow and co-created by him, is that you do feel that flexibility when you’re shooting, to try new things. “OK, we got the scripts, why don’t we try it like this?” People are bringing their own ideas or thoughts to the scenes. There is a freedom in that.

What was their pitch for you? How did they frame the concept of the show?

They talked about wanting a relationship to play out in more real time than you could normally do on a network show. And allow there to be missed connections and miscommunications, and have all the fumblings that sometimes go on with your relationship where two people are uncertain. Selfishly, for myself, I thought it was a really great character for me. But it was also exciting to do a Netflix model where you write the whole thing [first]. Before we started shooting, they had written, I think, eight out of the 10 episodes. So it was not a hard sell for me. 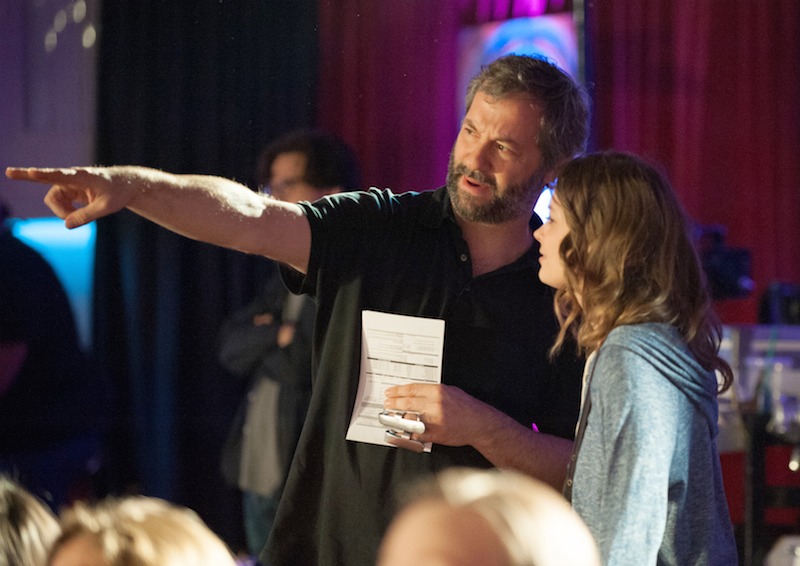 Do you like having the whole season in front of you when you sit down for something like this?

It isn’t even so much about having the episodes written, it’s just knowing that we’re doing it. It’s not like doing a network show where you do the pilot and you do the initial order. You’re waiting to hear if you get the back nine, you’re waiting to hear if you get a second season. The anxiety of that… I was ready [laughs] to have a different experience.

Is that something you’re able to put aside when it’s time to actually do the work? Or do you feel like it has an impact?

The anxiety of wondering if you’re coming back or not? I think it definitely affected the mood on [the “Community”] set. It was kind of stressful, but we always had fun as we were shooting the scenes. It would probably be more at the craft service table, being like, “Are we gonna keep going?” We were on the schedule, off the schedule. Move our night, push our premiere date. We always enjoyed shooting the show, but it can make for more stress, day-to-day, when you’re not even sure when you’re gonna air, if you’re gonna air, what time slot you’re gonna be in. You get pre-empted a lot on network television for local programming — or at least we did. We got pre-empted for a parade or a local sports game. It’s nice to have all of those things taken out of the equation.

The other striking thing about “Love” is that it’s definitely very funny in places, but it also digs harder into the drama side of things, more than I think I was personally expecting as a viewer. Was that something that struck you?

Oh, yeah. And selfishly, as an actor, that was really appealing, this character. Before “Community,” my career was mainly very independent films, so I was excited to see something [like this]. It was a bridge between those two roles. I felt that way working on “Girls” and so I was really excited, with this show, to go even further with that.

Was there one thing about Mickey, a line or a moment that helped you figure her out as a character?

I think the speech that she gives when she finds Andy at the Bliss House about wanting and wishing and hoping for love has ruined her life. That is the real need and the pain underneath her sometimes tough exterior that I really connected to. It’s sort of like, what’s driving all of this behavior and I think it’s that. That kind of moment of honesty and vulnerability, I really enjoyed.

So much of her arc is tied up in her substance abuse issues. Was that something you were excited about approaching or were nervous about?

I thought that the script handled all of those issues very honestly and respectfully, so I just wanted to try and do justice to the character. But I felt like I had such a great template with the script that I just had to be as honest as possible in my performance. 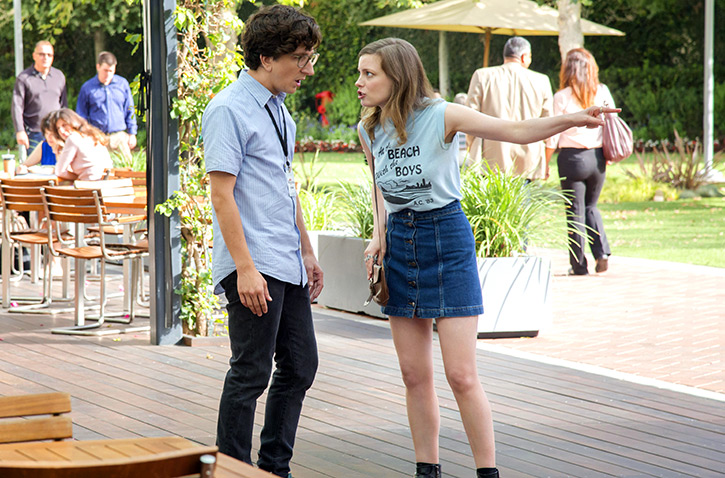 “Love” is said to be inspired by Paul Rust and Lesley Arfin’s relationship. In playing scenes with him, did you have a sense of how intimate that could be for him?

I think that very quickly, as they started to write the show, it started to depart from their real life. Charting an arc for a season is writing a lot of the supporting characters that aren’t directly based on anyone in their real life. So I think it started to verge from them as people fairly quickly, but it was also [laughs] a little bit strange. But strangely okay — we’d be shooting a sex scene while his then-fiancee, now-wife was at the monitor. But they were both so chill and cool about it and never made me feel more strange about it. There’s inherently strange things about our business, and that’s certainly one of them.

What leads to really great storytelling is when people can be that personal with it.

Yeah. I think they did a great job of both minding sentimental truths but also not being so closely adherent to their own lives that it felt like a documentary. It doesn’t feel like a document of their relationship; it feels inspired by real things that they’ve seen and experienced.

With Season 2, how has the show has evolved?

I think there’s a little bit less questioning of, “Will they? Won’t they?” in Season 2 and more of just exploring these two people starting to get into a relationship rather than the dance of it in Season 1. But that doesn’t mean there still aren’t hiccups and roadblocks and disasters along the way.