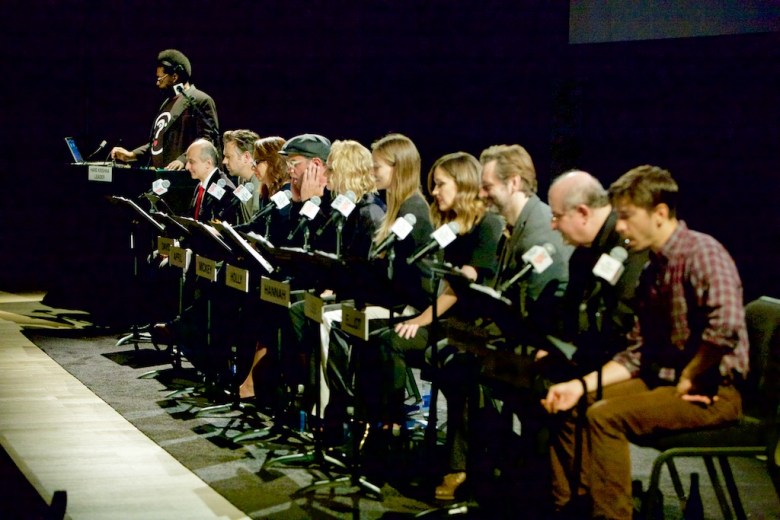 Sorry, Los Angeles. For years, the Film Independent-sponsored and Jason Reitman-created Live Read has been almost exclusively the domain of Hollywood and its surrounding environs (with a few field trips, including a jaunt to TIFF, under its belt), but now the lauded live event is traveling east for what appears to be a protracted stay in New York City. The Live Read previously hit New York City in 2012 with a star-studded reading of “The Apartment,” featuring the talents of actors like Emma Stone, Paul Rudd and Greta Gerwig, but last week’s Olivia Wilde-directed “Hannah and Her Sisters” kicked off what seems to be a new effort to translate the charms of the event to the left coast.

The New York Times and Film Independent have already announced a second Live Read (title and cast to be announced at a later date), which will take place on Friday, October 14, and based on the knocked-out-of-the-park success of last week’s show, it looks like Live Read will have a healthy new life in a fresh locale.

READ MORE: Why the Live Read is Here to Stay

And, yes, as obvious (and literal!) as it may sound, it really does have to be seen live.

Friday night’s event was introduced by Film Independent’s film curator Elvis Mitchell, who compared the event to seeing talented musicians covering your favorite songs and adding their own twist to them. And, for Mitchell, the point of the Live Read fits in neatly with the aim of Film Independent: To “expand the definition of what film is.” 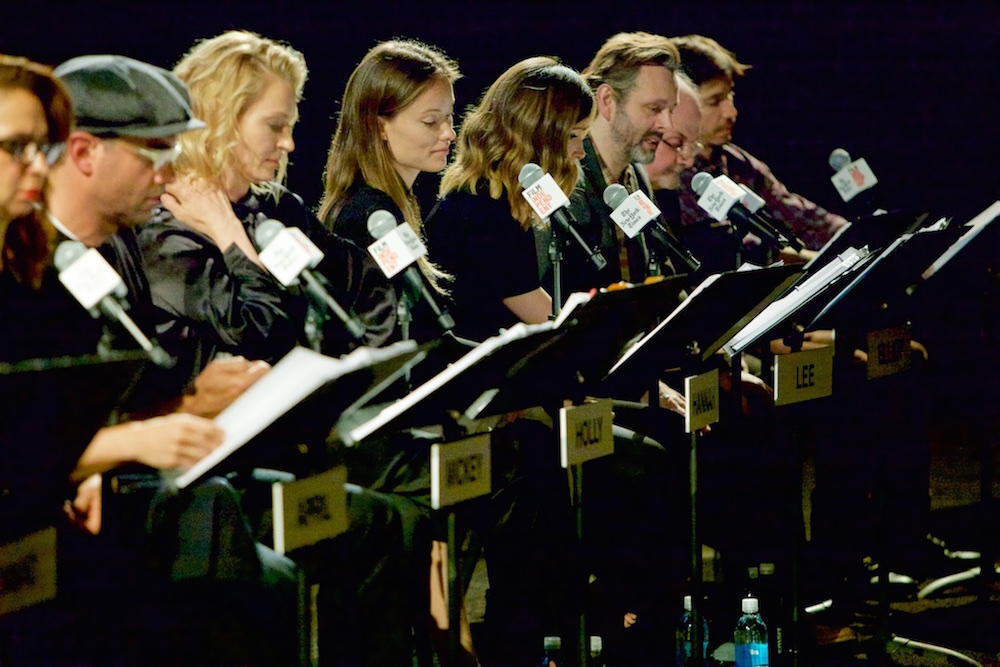 The Live Read has long been close to Wilde’s heart. The actress and producer has participated in a number of LA Live Reads over the years, with parts in “Shampoo,” “Boogie Nights,” “Dr. Strangelove” and “American Pie,” so she was a natural fit to carry the torch to New York City.

Wilde told Indiewire this week how it all happened, seemingly quite organically: “I was in LA participating in Mark Romanek’s live read of ‘Dr. Strangelove,’ and I suggested to Elvis Mitchell backstage that they do ‘Hannah and Her Sisters.’ The script is brilliant, and I knew it would lend itself to the Live Read format. Elvis looked at me and said, “No, YOU should do it.’ So, I accepted the dare.”

Wilde added that “Hannah and Her Sisters” is “just a perfect script, and I knew an audience would enjoy having the chance to just focus on the genius of the writing, which is what the Live Reads allow for.”

The original 1986 comedy from Woody Allen features an all-star cast, including Mia Farrow, Dianne Wiest and Barbara Hershey as Hannah and, naturally, her sisters, and follows the family over the course of three very different Thanksgiving dinners. As the family tries to untangle their complicated lives and relationships, some major truths are unearthed and some big characters changes take root. It’s hard-won storytelling done well, something that appealed to Wilde’s sensibilities.

“Once you strip away the bells and whistles of filmmaking, you’re left with simple storytelling through spoken word, which creates this awesome kind of group meditation in the audience, when everyone is focused on the same imaginary scenarios. They’re collectively conjuring up the same images in a dark theatre. It’s really exciting to both witness and experience. It’s basically our most ancient method of entertainment,” Wilde said.

It worked out, and Wilde’s take on the classic Allen film certainly does lend itself to the format. Although Wilde was bolstered by the support of an extremely talented cast (including big turns from both Uma Thurman and Maya Rudolph, and stellar supporting work from Rose Byrne, Justin Long, Michael Sheen and Jason Sudeikis), one actor pretty much stole the show, much to the delight of both the assembled performers and the audience itself. 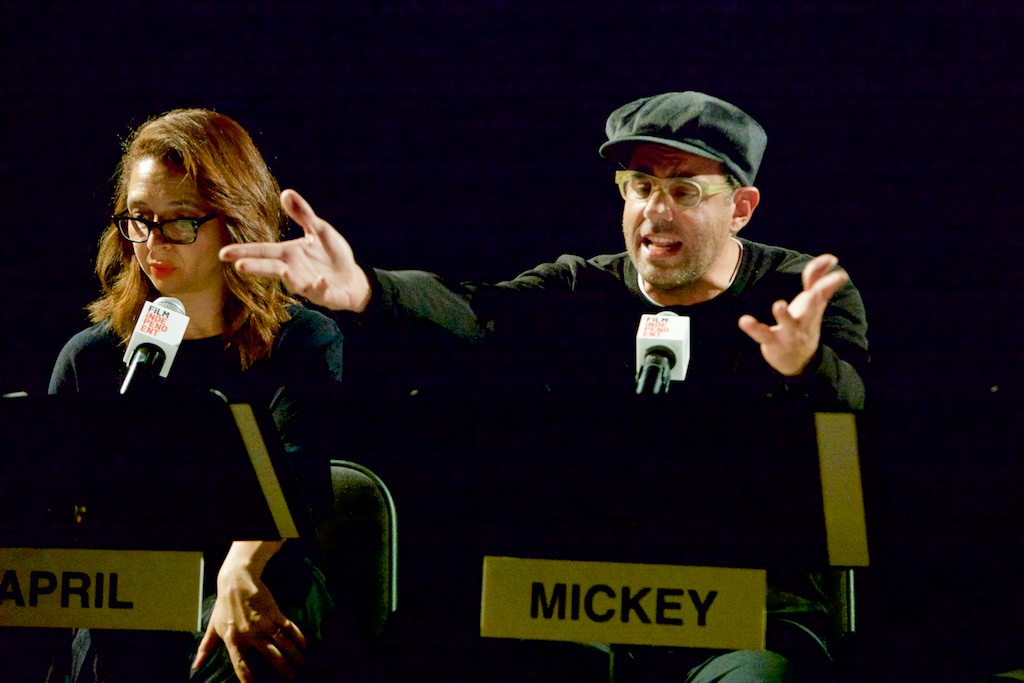 As Mickey Sachs (the role originated by Allen), Bobby Cannavale turned in a jaw-dropping Allen impersonation, all fits and starts and jitters, edged with his own sense of humor and timing. He had the audience rolling (along with the rest of the cast, even narrator Stephen DeRosa and musical director Questlove could scarcely stifle their amusement), a testament to the funny, flinty power of the Live Read. Hey, you had to be there.

Casting, of course, was paramount to Wilde. “I have a deep love for every character in that script, as well as the actors who originated the roles, and wanted to do them justice by finding the perfect voice to once again bring them to life,” she explained. “I reached out to people who I felt were organically the right fit, but who would also bring their own creative choices to the reading.”

“It’s a scary proposition for actors, considering that it’s a cold read with absolutely no rehearsal. They’re literally reading together for the first time in front of an audience. I explained what I was going for and asked them to come join the party. Luckily, they didn’t hang up on me,” she added.

Wilde long suspected that New Yorkers would react positively to the Live Read, after witnessing the “fantastic read” that was “The Apartment,” but she did make sure to add some special touches meant to appeal directly to them.

READ MORE: Jason Reitman Says Farewell to His Live Read Series With His Very Own ‘Thank You For Smoking’

“I knew New York audiences would dig the concept of the Live Read, as they’re veteran theatre-goers, and it is a unique form of performance art. I was excited to use a mostly local NYC cast, including Questlove, who is such a wonderful part of our cultural fabric these days. He really is a modern New York renaissance man. Salman Rushdie was another person who was unique to the New Yorkiness of this reading, and he really was perfect for the role of Frederick and hit it out of the park,” Wilde said.

As an active producer and actress, trying on her directing hat again (she previously directed the short “Free Hugs” in 2011, along with the music video for Edward Sharpe and The Magnetic Zeros’ “No Love Like Yours”) was a natural step forward for Wilde.

“I think the best way for anyone, male or female, to break into the industry, is to work on becoming the best possible storyteller. Experimenting with a variety of mediums allows you to strengthen every directing muscle,” Wilde said. “I have found that directing short films, music videos, and now live readings, has really helped sharpen my skills as a filmmaker, as I learn to assemble the best people, communicate with them efficiently, and ultimately, leave them alone to be brilliant.”
The next New York Live Read will take place on October 14. Here’s hoping that one is brilliant, too.

Check out the trailer for “Hannah and Her Sisters” below.