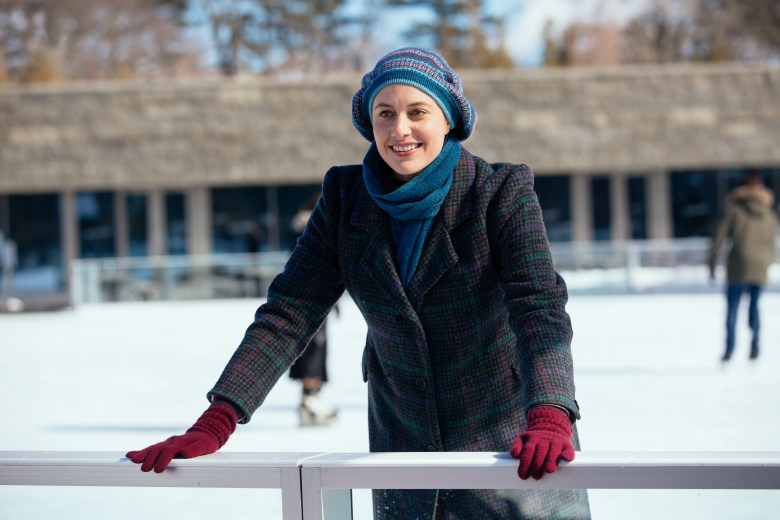 Editor’s note: Malgosia Turzanska is a costume designer who has worked on such films as “Ain’t Them Bodies Saints,” “In a Valley of Violence” and the Cannes debut “Hell or High Water.” This week, her “Maggie’s Plan” opens, directed by Rebecca Miller and starring Greta Gerwig, Julianne Moore and Ethan Hawke. The charming film follows an ill-fated love triangle that sees Gerwig’s eponymous Maggie aiming to right some big wrongs after having an affair with Hawke’s character. Each character has a very unique wardrobe, which speaks to their very different motivations and personalities.


Ahead, Turzanska shares her process for outfitting all three actors.

Some spoilers for “Maggie’s Plan” ahead.

Rebecca Miller’s script surprised and seduced me with its intelligence, humor and sincerity. Most movies that fall within its genre are populated with flat characters and stories that travel safely from point A to point B. In “Maggie’s Plan,” that point B is merely a comma in a much longer, much more complex journey. The characters are layered, messy, and full of internal tensions. It was my goal to create costumes that were similarly full of texture and tension to help tell their stories.

I started with Greta Gerwig’s character, Maggie. She’s the enabler, the encourager. Her meddling and plotting of people’s fates, from her students’ to John and Georgette’s, made me think of the Greek Moirai, the mythic weavers of fates. That led to the idea of using textiles with visible warps and wefts in her clothing. We used a lot of wovens, plaids, and textured wools — you can see and feel the act of weaving in them. She is always in multiple, contrasting layers that are at times jarring with one another.

There’s a moment in the middle of the film, once she realizes that her marriage is over, when she is completely texture-less, in a simple lavender slip. It’s a rare moment of bareness. But she soon reemerges, textures galore, to continue on, full of conviction and rationale.

Another part of Maggie’s costumes is her almost pathological practicality. The logic she uses to formulate her grand plan, that simply divorcing John would be such a waste, is the same logic she applies to clothing. She wears dated hand-me-downs and reuses the same pieces over and over, putting them together in an unapologetic and endearing way. Socks over tights, multiple cardigans — it’s all functional and sensible. 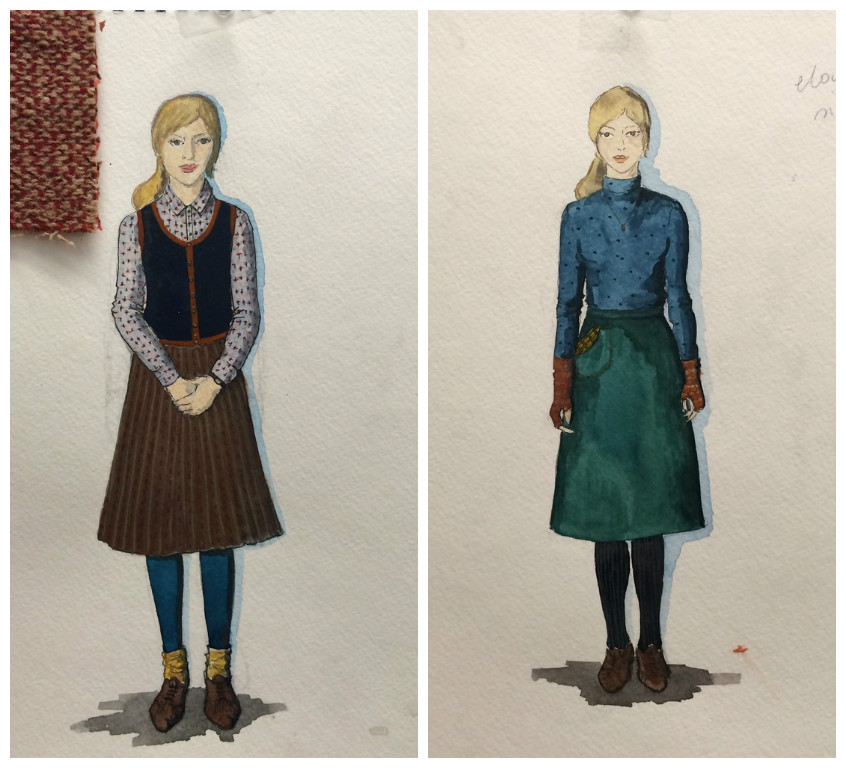 Maggie’s style is also influenced by the 1940s silhouettes. The modest A-line skirts, reasonable shoes, dresses with a nipped in waist — I wanted give a nod to the moment in history when women started working professionally on a large scale and realized they could do what men do.

I felt both touched and empowered by Maggie’s realization that she doesn’t need a man by her side in order to follow her dream of being a mother. In the words of Rosie the Riveter, “We Can Do It!” 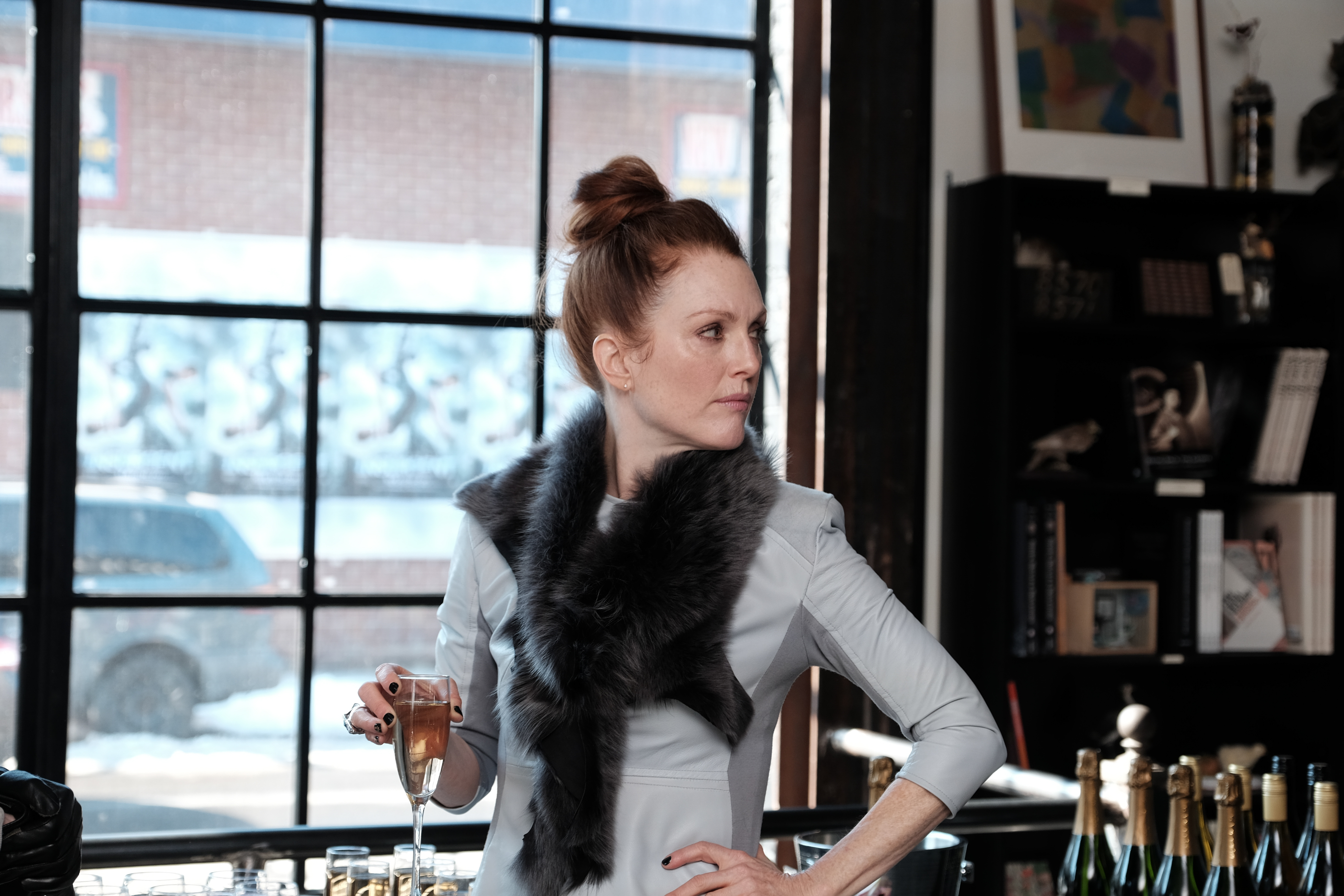 Julianne Moore’s Georgette has a very different costume logic. She, as an anthropologist, understands the power and symbolism of clothing. She uses her appearance expertly to create a persona she wants people to see. The Viking queen, the Nordic empress. She chooses pieces that look like they’re made of animals she’s hunted and skinned herself. She wears furs, leathers and sweaters that resemble pelts, all in a very limited color palette — from fresh snow through slush to frozen lake.

But truth is, she is completely helpless when surrounded by actual forceful winter. Her furs act like an armor of sorts, but they are misleading. There are a couple of moments where we see her in the safety of her own home, and she’s in a gorgeous blush pink Ryan Roche sweater. It’s still got the furry texture, but it is gentle and soft and comforting, as if we were witnessing her thaw. 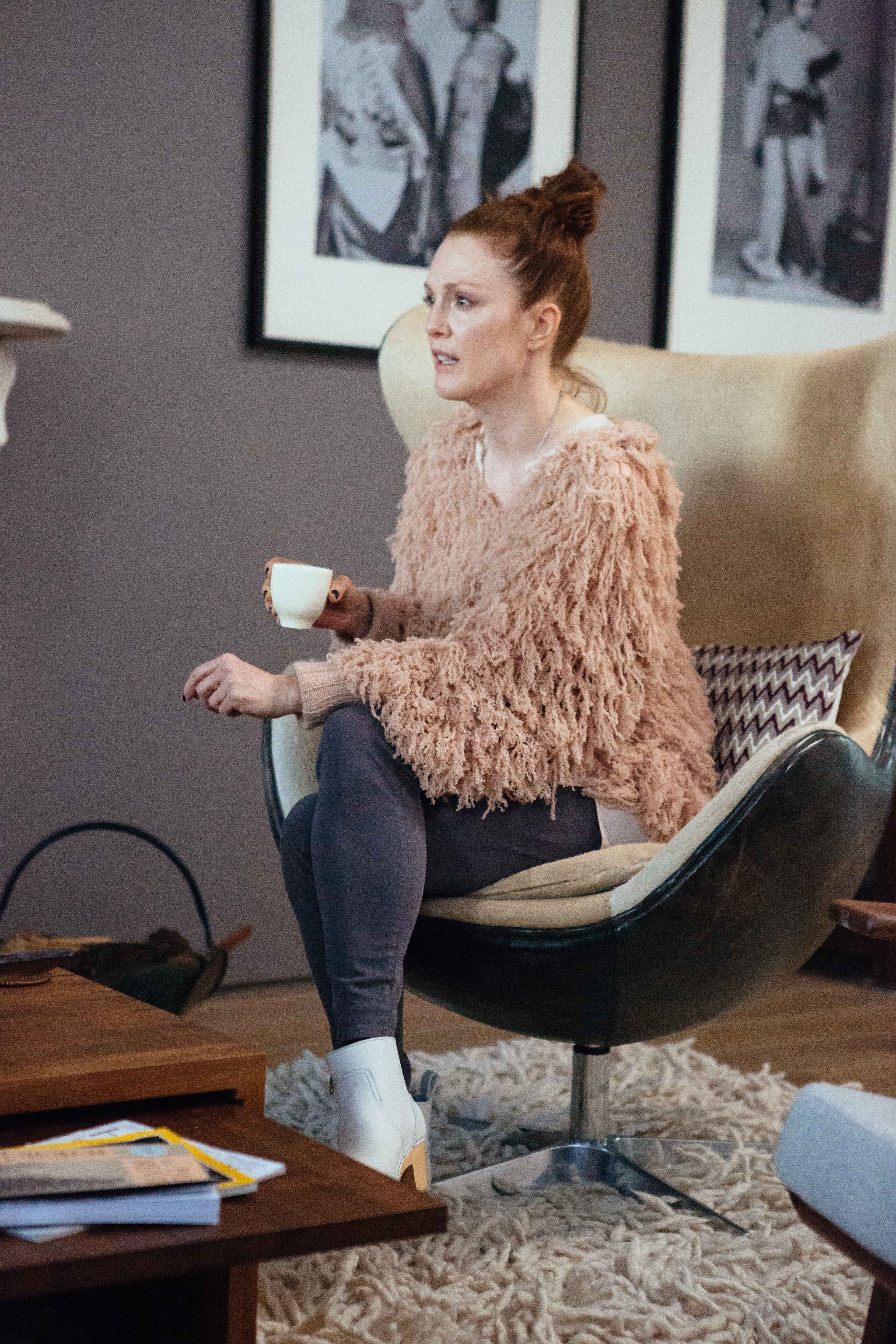 One of the images I was really drawn to when creating a board for her character was a cherry tree branch, full of fruit, but thoroughly covered with spiky, sharp icicles. That was a perfect representation of Georgette for me. The warm color inside protected by a glacial shield. 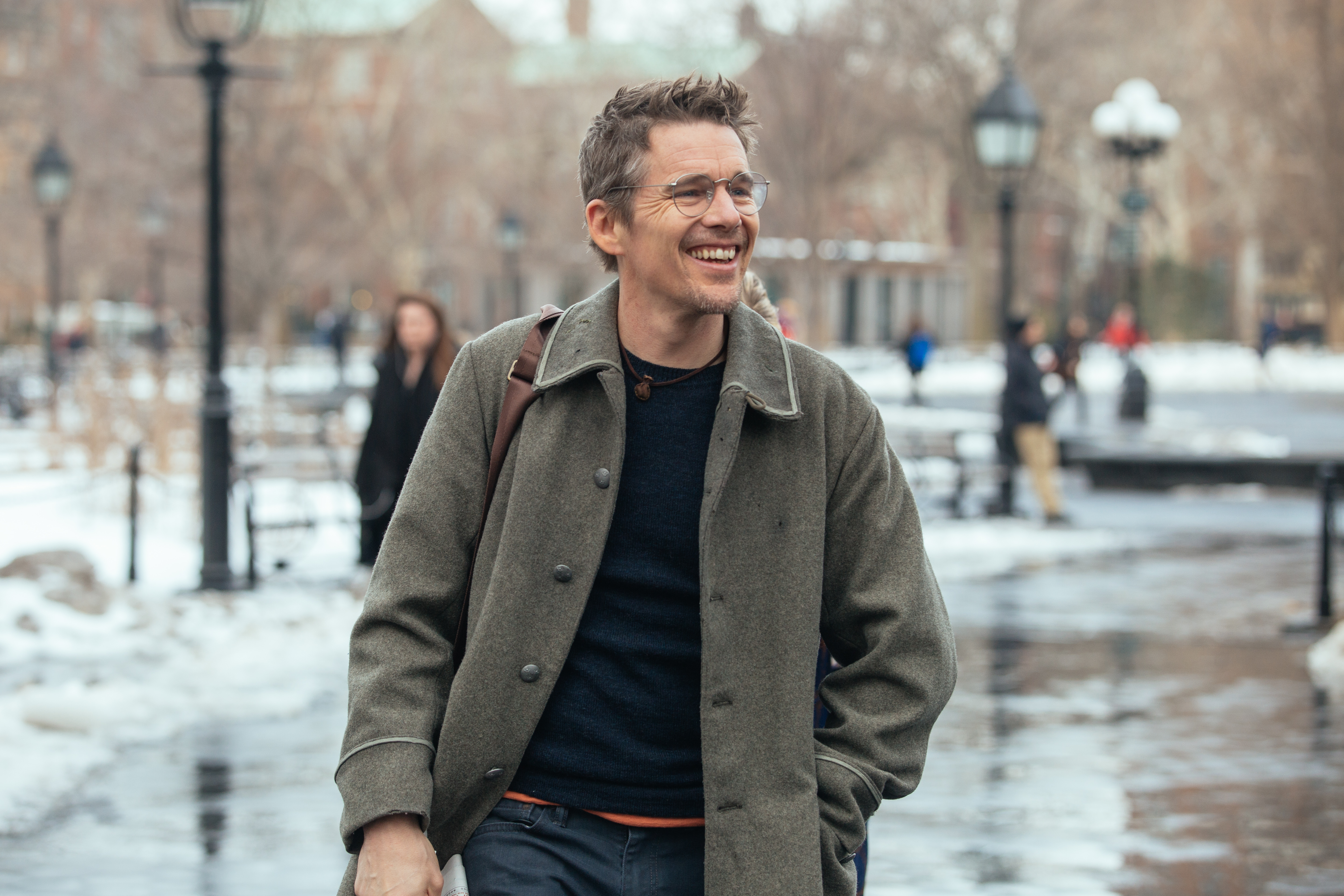 John, played by Ethan Hawke, is quite a character. He is an anthropologist, but also a bit of a rock star in his circle, and the way he dresses reflects that. He has a reputation to uphold. He carries souvenirs from his anthropological fieldwork expeditions — a protective Tuareg bracelet, an amulet on his neck, a 1940s Swedish poacher’s coat he probably received as a sign of brotherhood after a night of drinking moonshine with some veteran in the polar night — who knows!

Even though he carries himself with ease and coolness, there’s a growing frustration in him. I represented that, somewhat literally, with the slivers of color creeping out from underneath his thick, manly sweaters. He believes he could be so much more than he is — a writer, an artist, and not just” a highly regarded fictocritical anthropologist!” I love the moment when Georgette opens his eyes to the fact that what he’s had all along, both in terms of a relationship and a career, is exactly right for him. It’s one of the deeper moments of the whole story for me, very much representing being an adult and embracing what we already have. Grass is always greener, but if we tend to and focus on our own side, who knows what will grow? 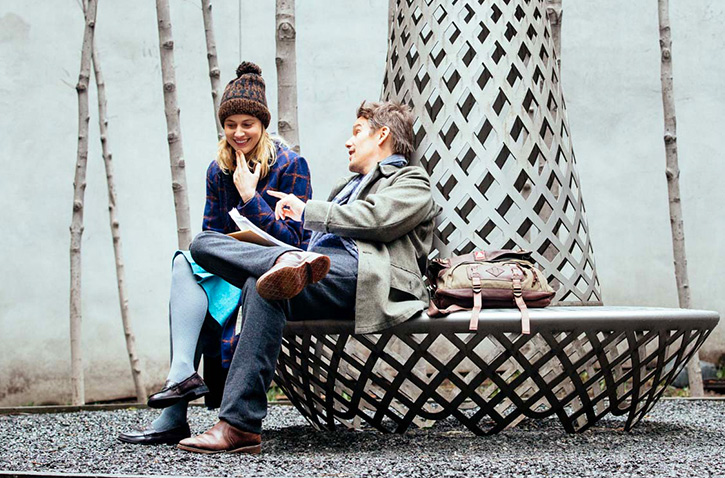 Rebecca is such a beautifully smart, funny and fearless director, and she continued to push me throughout the whole creative process to delve deeper and explore further. Our fantastic actors, too, were gutsy and never put their own vanity before their characters — they were not afraid to be funny or even ridiculous at times, and I think that’s what made the characters deeply human. The whole experience was just exhilarating, and I certainly hope this is not our last collaboration.

WATCH: ‘Maggie’s Plan’ Director Rebecca Miller on Finding Herself Through Her Films: “I hide myself in funny places”

Watch the trailer for “Maggie’s Plan” below: