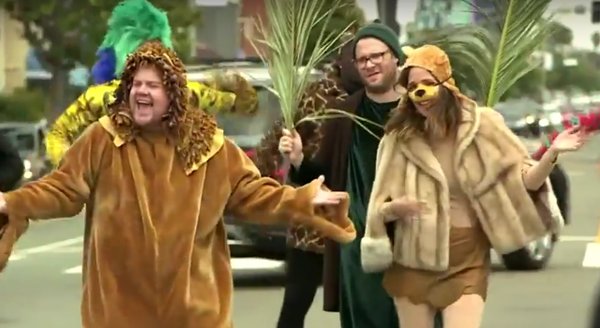 James Corden’s latest performance of “Crosswalk The Musical” was a rendition of “The Lion King.” The host of “The Late Late Show” invited “Neighbors 2” co-stars Seth Rogen and Rose Bryne to participate in the thrilling world of crosswalk theater, and the outcome was nothing short of spectacular.

The skit, shot like a documentary, showed Corden as the musical director pumping up his troupe for their performance that would take place on a crosswalk in Los Angeles. Bryne and Rogen then join the cast, with Seth not really interested in being part of the production. “What is happening?” he asks. “I think there’s been a mistake.”

Meanwhile, Rose is ecstatic about forming part of the team, “Rose, I know has a lot of the theater [experience] and a joy of performing theatrically,” Corden says. “Seth’s agent … is very pushy.”

They’re soon given name tags with Rogen’s name misspelled as “Sath.” When roles are handed out, Corden nabs the lead playing Simba, Bryne gets a dual role as Nala and Timon and “Sath” is scenery, rocks and the background.

When it’s showtime, the whole cast is seen in their costumes ready to dash into the crosswalk when the light turns red. Their first song is “I Just Can’t Wait To Be King” and after the light turns green they dash off to the sidewalk.

The cast also sings “Hakuna Matata” and “Can You Feel the Love Tonight” and Rogen slowly starts to really come into his own and appreciate the world of crosswalk theater… well kind of.

Watch the hilarious video above.

This Article is related to: Television and tagged Rose Byrne, Seth Rogen, The Late Late Show with James Corden, The Lion King