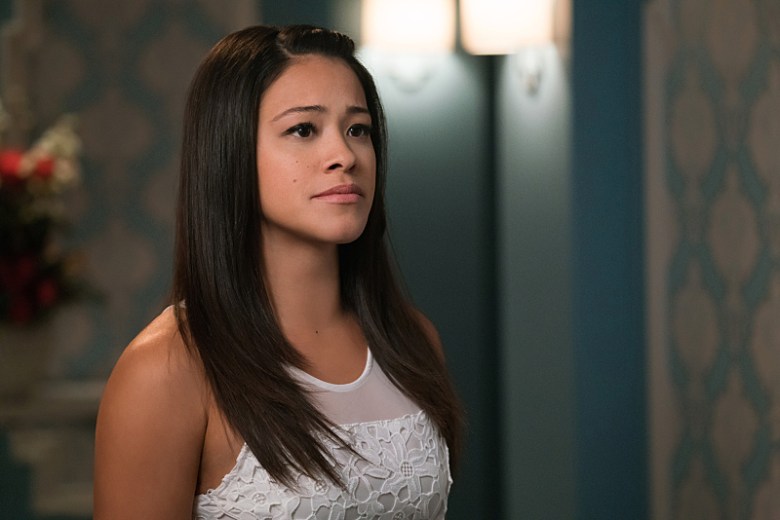 Between the sweet romances, hilarious post-modern comedy, heartfelt drama and crazy plot twists, “Jane the Virgin” is the sort of show that could lose its way very easily. The CW dramedy began with Jane (Gina Rodriguez) being artificially inseminated by mistake, and that was just the jumping-off point for a story that has so far included murders, kidnappings, drug cartels and, of course, secret evil twins.

READ MORE: How a Comedy Like ‘Jane the Virgin’ Inspires Social Discussion

Yet, after 43 episodes, “Jane the Virgin” has managed to keep all of these elements balanced. That’s not by accident, as showrunner Jennie Snyder Urman tells Indiewire. The method to “Jane’s” madness, it turns out, is being very strict about plotting the show.

The second level of reality exists within what Urman called “the heightened world of the hotel,” owned by baby daddy Rafael (Justin Baldoni). That’s where “the ostensible fantasy of wealth” (Urman’s words) can allow plotlines can get more telenovela-y, like Petra (Yael Grobglas) being surprised by a secret long-lost sister or Rafael discovering that the mother who abandoned him as a child is now a crime lord.

And then beyond that, there’s the ostensible “telenovela within a telenovela” scenes, where Jane’s actor father Rogelio (Jaime Camil) appears in television shows with extreme premises. Right now, Rogelio stars in “Tiago a Través del Tiempo,” which combines all the drama and romance of a classic telenovela with time travel. This leads to plotlines like Tiago seducing Eleanor Roosevelt’s lesbian lover so FDR will pass the New Deal.

That might make it sound like the scenes involving Jane would be the least entertaining (a big deal for a show that the Emmys officially categorized as a comedy last year, despite its hour-long runtime). But Urman said the show makes an effort to “inject Jane’s life with fun,” aided in part by semi-regular fantasy sequences inside Jane’s head. Those moments test Rodriguez’s incredible range — in the last few episodes, she’s had to salsa dance, mime like a classic silent film star and out-rap Nicki Minaj.

“There’s literally nothing she can’t do and make it real, with the way she emotionally calibrates everything,” Urman said. And Rodriguez leads the cast in making sure the show stays grounded emotionally: “Once something crazy happens, Jane feels it and unpacks and explores it. It’s all rooted in our family and our characters.”

By focusing the show this way, “Jane’s” most outrageous twists are grounded in an emotional reality, something that is plotted out at the very beginning of every season. Urman and her writers stick very closely to that road map, so that seeds of the show’s season finale have been planted since the season premiere.

That includes careful attention to the established romantic conflict between Jane, Rafael and Michael (Brett Dier). Love triangles are one of storytelling’s most classic tropes, but one that can get tired. “The minute I get bored is the minute I feel the audience will,” said Urman said, who made it clear that she’s not interested in having the characters constantly change their minds.

“You start to lose faith in the characters if they keep going back and forth,” she said, which is why Jane made a definitive choice to be with Michael in this season’s Episode 12, and has stayed committed to him since.

That said, Urman warned, “things change. They always do and they always will.”

“Jane” will always have its dramatic moments, but it will also always have Rogelio. And here’s exciting news: No matter what happens in the Season 2 finale, scenes from “Tiago a Través del Tiempo” will continue into Season 3. That means we’re guaranteed plenty more of Tiago traveling through time to seduce women and fix history — while also planting ideas that apply to the rest of the episode. “It’s a really great way to themantically explore points,” Urman said.

Urman said that “Tiago” will conclude at some point in Season 3, though, because traditional telenovelas always have an end point. For those worried about what that might mean for “Jane the Virgin’s” future, just remember — it has never been anything resembling traditional.

This Article is related to: Television and tagged CW, Jane the Virgin, Jennie Snyder Urman