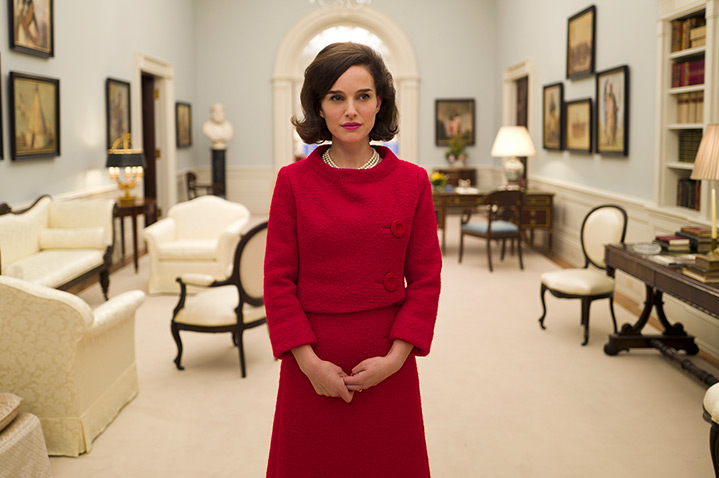 Amazon, Netflix, and other major buyers packed the Olympia theater in Cannes Thursday for a seven-minute promo screening of “Jackie,” directed by Pablo Larraín (“No”), written by Noah Oppenheim (“The Maze Runner”), and starring Natalie Portman as Jackie Kennedy.

Portman appears to have turned in a remarkably convincing portrayal of the former First Lady, nailing details like her delicate mannerisms and famously breathy voice. The movie has a grainy texture that’s reminiscent of the 1960’s, and includes actual film clips from 1963, which has the effect of blurring the lines between archival footage and reenactments.

The movie also stars Peter Sarsgaard as Robert Kennedy and Greta Gerwig as a member of the White House staff. Darren Aronofsky, who directed Portman in 2010’s “Black Swan,” is a producer.

“Jackie” covers a four-day period in the former First Lady’s life, beginning just before the assassination of President John F. Kennedy and focusing on the grief-stricken days that followed.

Positioned as a potential awards contender, “Jackie” promises a story that “was never told,” according to a tagline included in the promo reel. Wild Bunch’s recently launched sales company Insiders is handling international sales for the movie, while CAA is representing the film for U.S. rights. Judging by the chatter amongst buyers in the theater after the screening, “Jackie” should be one of the hottest titles being shopped at Cannes.

Larraín’s latest film “Neruda,” about the Nobel Prize-winning Chilean poet Pablo Neruda, will have its premiere at the opening night of Cannes’ Director’s Fortnight on Friday, May 13. The director’s 2012 political drama “No,” distributed theatrically in the U.S. by Sony Pictures Classics, earned an Oscar nomination and won Larraín Cannes’ Art Cinema Award.

Other upcoming promo screenings taking place at Cannes include “Loving Vincent,” an animated movie about the work of Vincent Van Gogh, and “Back to Burgundy,” a dramedy from French director Cédric Klapisch.