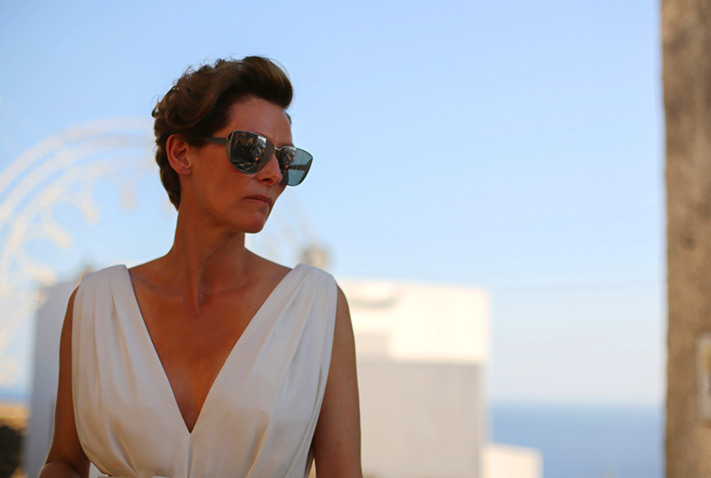 There’s a scene towards the end of Nagisa Oshima’s deservedly infamous “In the Realm of the Senses” in which hotel owner Kichizō Ishida — taking a rare break from the all-consuming fuck-fest that will soon end in his death — stumbles down the  street as a phalanx of soldiers march in the opposite direction, mobilizing for World War II. Ishida, who’s been so busy screwing that he hasn’t showered in weeks, barely even notices the army as they pass by. At a time when nationalism was all the rage, Ishida and his lover were radicals for their self-imposed solipsism, for tuning out the world beyond the small room that had grown pungent with the smell of their bodies.

There are few better metaphors for the myopia of hedonism than a swimming pool on an island paradise surrounded by the sea. The four beautiful creatures at the heart of Luca Guadagnino’s gloriously vibrant “A Bigger Splash” may exert more control over their sexual appetites than Ishida ever could, but their debauchery is fueled by a similarly narrow focus. The difference here is that these are absurd characters behaving normally, not normal characters behaving absurdly. They are celebrities and dilettantes and personal friends of Björk’s, and they spend the entire movie flirting and fucking and fighting amongst themselves while remaining willfully oblivious to the migrant crisis happening just off shore (perhaps you’ve read about it in the news).

Who could blame them for turning a blind eye to the death and desperation that creeps along the edges of this gorgeous film when Tilda Swinton is draped over a lawn chair in Dior?  Named after a David Hockney painting and initially conceived as a remake of Jacques Deray’s 1969 Alain Delon vehicle “La Piscine,” Guadagnino’s first feature since 2009’s “I Am Love” might just as easily have been called “I Am Lust.” Here is a movie that’s genuinely alive, plunging into theaters with the style of a swan dive and the impact of a cannonball. It’s a messy romp that’s funny, hot, and horrifying in equal measure; and if it squeaks a bit whenever it tries to shift gears, that sound just becomes another instrument in Guadagnino’s latest symphony of the senses.

“A Bigger Splash” is essentially a love square with four wrong angles. Teasing our collective fantasy of seeing her play David Bowie in the inevitable biopic, Swinton stars as Marianne Lane, a world-famous rock star whom the actress has described as being equal parts Bowie, Chrissie Hynde, and P.J. Harvey (though it’s tempting to think of her as Marianne Unfaithful).

For those of you didn’t immediately just stop reading this review in order to go buy tickets, some more detail: Marianne has recently undergone a risky surgery to repair her vocal chords. With her hunky boyfriend Paul (Matthias Schoenaerts) in tow, she’s retreated to the idyllic Mediterranean island of Pantelleria in order to recuperate. She can’t speak, but Paul finds plenty of ways to keep her mouth busy. For her part, Swinton does more with silence than most actors could with Shakespeare. 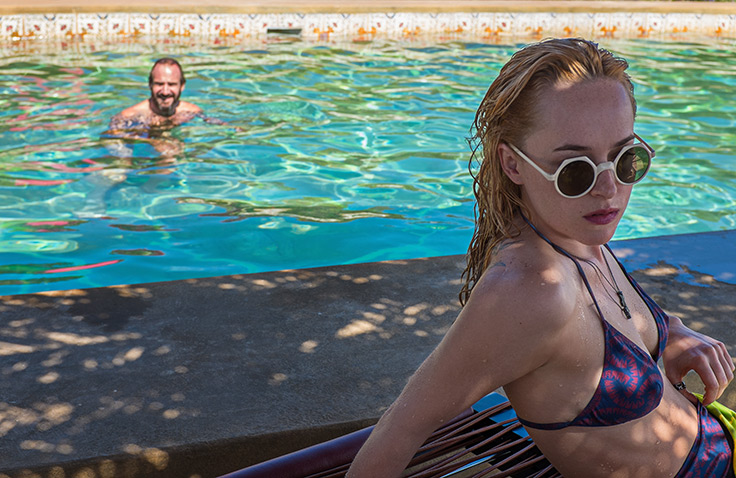 Unfortunately for them, this hedonistic slice of heaven isn’t built to last. A garbled phone call tells Marianne that an uninvited guest from her past is on his way, and he’s bringing a surprise guest. Just then, the shadow of an airplane cuts across her face as she suntans on the beach; it’s the first bolt-up-in-your-seat moment in a movie where almost every shot is a stunner. Something wicked this way comes.

Their names are Harry (Ralph Fiennes) and Penelope (Dakota Johnson, showing the world so much more of herself than she did in “Fifty Shades of Grey”), and they arrive on the island with all sorts of baggage. Once upon a time, Harry and Marianne made beautiful music together (he produced her songs; also, they had lots of sex). A balding, barrel-chested Caligula, we never actually see Harry do coke, but it seems like he snorted enough of the stuff during his glory days that he’s achieved a perpetual high. The man is a manic and motormouthed bon vivant, the life of a party that everyone else is ready to leave.

Fiennes, gobsmackingly good in a role that adds a bacchanalian twist to his tragicomic turn in “The Grand Budapest Hotel,” makes it clear from the start that Harry is hiding some clenched rage under all that chatter. After all, this is the same guy who played Voldemort and Amon Göth — he doesn’t crack a smile without an ulterior motive. That motive becomes pretty pretty clear during the show-stopping scene in which he christens the villa by dancing to The Rolling Stones’ “Emotional Rescue.” Harry stares a hole through Marianne and her new lover as Mick Jagger’s words flow through him: “I will be your knight in shining armor. Coming to your emotional rescue. You will be mine, you will be mine, all mine.” When left to his own words, Harry is twice as direct and half as convincing (“Do you think I came here for the fucking capers?” he snaps at Marianne in one of the film’s most acidly hilarious moments).

Penny is Harry’s 22-year-old daughter, a flaxen-haired seductress who only came into his life a year ago, and much of his shtick seems for her benefit. It’s unclear why Harry brought her along. Maybe they’re bonding. Maybe — gulp — they’re shagging. Maybe she’s a decoy for his true intentions, or the Trojan horse that will carry them to Marianne’s doorstep. Whatever the case, Penny is a siren who will sing anyone she can to shipwreck; she can barely say “hello” without sounding like she’s quoting a particularly naughty passage from “Lolita.”

In lesser hands, this could’ve been a Woody Allen movie, but Guadagnino — always with his chef’s hat on — takes the ingredients for a sunbaked creampuff and slowly stirs them into a three-course meal. Working with regular cinematographer Yorick Le Saux, Guadagnino shoots in a sensual register where every shot feels just a hair too perfect to exist anywhere outside the movies. Snap zooms playfully focus on emotions that burst like firecrackers, rhythmic cuts throw you back on style whenever things risk becoming too realistic, and Marianne’s aviator shades reflect every character against their true intentions. Best of all, the soundtrack is wild and true, running the gamut from Harry Nilsson to Popol Vuh. If you thought the theme from “Aguirre: The Wrath of God” felt dramatic over a shot of Klaus Kinski descending into madness, imagine it playing when love is on the line. 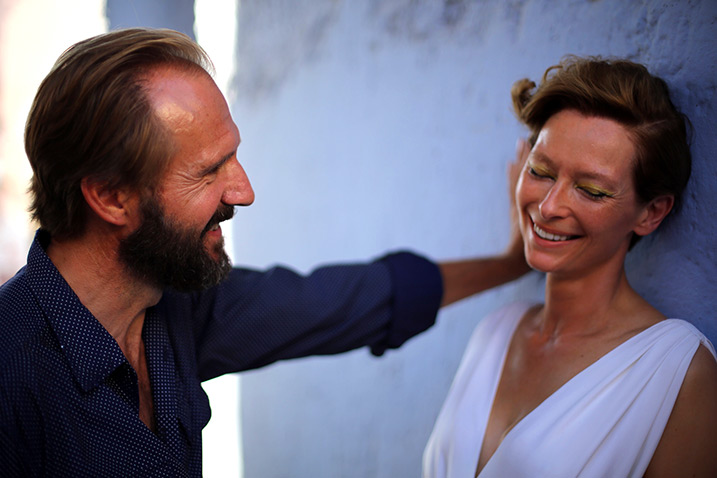 Even before the story takes a hard left turn in the third act, it feels like Guadagnino is juggling four characters who all think that they’re in different movies. Penny is skipping around “Bonjour Tristesse,” Harry is diving headlong into a rom-com that’s gone off the rails, Marianne is swatting away a bizarro remake of “Contempt,” and Paul is in the best Patricia Highsmith adaptation that Jim Jarmusch never made. “A Bigger Splash” has neither a clear center nor a clear moral, and it’s all the better for it. This is a film about behavior, not plot — and how people are ruled by emotion, and not logic.

The narrative’s eventual transition into darkness is a bit clumsier than it needs to be, but Guadagnino steers this story in the only direction it’s willing to go. At the same time as things go south for Marianne and her houseguests, the news breaks that seven migrants have just drowned offshore — naturally, it’s reduced to the sound of white noise of a local television broadcast. Later, one of the survivors accidentally knocks a ball over the fence of the police pen where he’s being held. Penny, walking by at the time, thoughtlessly tosses it back. By the time she steps inside, it’s all a distant memory. Out of sight, out of mind. The world only exists as far as she can feel it.

Guadagnino isn’t judging these character for their natures. On the contrary, the film sides with Harry when he bellows: “Everyone’s obscene — that’s the whole point!” Some people swim in the ocean, others in a private pool. Both can be dangerous places that stretch deeper than they seem, but it’s a lot more damning to drown in the latter.

“A Bigger Splash” is now in theaters.