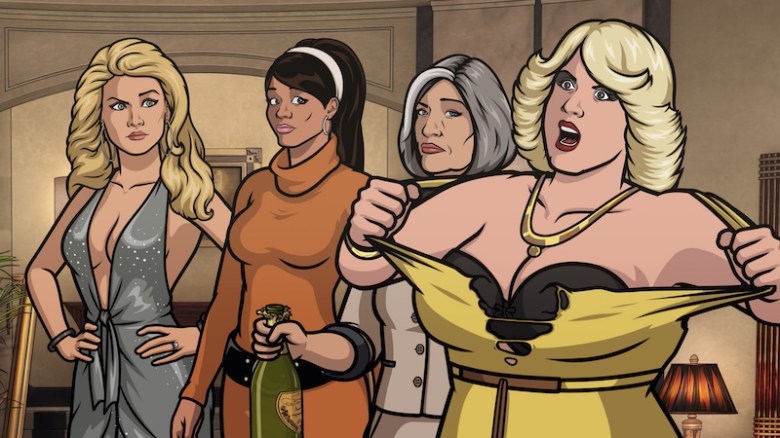 After spending last week reestablishing the long game that is “Archer Season 7: Who Killed Sterling?”, “Double Indecency” took some time to itself for what quickly became “Archer’s” version of “Extreme Makeover.” Thanks to a confusing, though ultimately accurate message from Carol, the men went to meet Dan Zisner, while the women entertained a surprise meeting from his wife, Mrs. Barbie Zisner.

Both parties make the same request of The Figgis Agency: that they seduce their spouse, sleep with him/her and record the deed as evidence of adultery. After some debate over who should play Mr. and Mrs. Robinson, two bets were hatched: Lana bets Pam can seduce Mr. Zisner before Carol (with Mallory backing Carol), and Archer puts his money on Krieger bedding Barbie before Cyril can (with Ray fronting Cyril).

Sadly, we didn’t get to see who won, as the two groups inadvertently discovered the ruse they’d been hired to perpetrate. Turns out the Zisners get off on watching other people sleep with them, and that proved a bridge too far for this tightly-wound crew. Archer started a fight — that, for what it’s worth, he also finished — which landed the private instigators in the clink for six hours. But hey, at least they all finally agreed the agency is above accepting these cheating cases.

Be it blue kerasal or germicide, Archer’s desperate drinking binge this week showed how dangerously far the former secret agent will go in his neverending search for a drink. Just the image above makes us nauseous, so we can only imagine how Archer’s shriveled liver felt after downing a comb’s length of the stuff. Though, as is almost always the case with Archer, we have to admit it is impressive that he survived. Maybe he is immortal…

The only part missing from the knock-down, drag-out brawl that capped this week’s episode was the line, “This time it’s personal.” Still, the animators did a fine job expressing the sentiment on the faces of each character throwing down. Archer, in particular, looked unusually ticked off while throwing punches and cushioning the fall of all those poor chairs. I would’ve expected Lana to handle Barbie with a bit more ease, but Mallory’s bottle-breaking threat to spill her opponent’s guts served as an adequate replacement. Good work, everybody.

Note: Most of the episode’s best phrasing moments came via direct repetition, which isn’t as fun to recreate in writing. We’ll remember them fondly, but the above deserves an extra moment of attention.

One could make the argument the Zisner’s desire to watch each other have sex with other people via video, rather than in person, serves as an extreme example of the rampant narcissism spread throughout Los Angeles. But…that’s a bit of a reach, seeing as part of the fetish is the danger and sin involved in cheating, which wouldn’t be so easily recreated in person. (How do you feel like you were cheated on if you’re sitting there, watching it happen?) So instead, we’ll point to the giant skeleton mouth of a…shark? Dinosaur? Alligator? Well, probably not an alligator, as Archer would’ve commented on his greatest fear if it was staring him right in the face. But whatever was mounted behind Don’s desk is so garishly boastful only a man compensating for something would hang it. That’s pretty L.A., the land of ego-stroking.

Remember in the season premiere when Archer threatened Pam’s life if just one of her pink, puppy-dog flyers made it out into the world? Well, now it’s become quite clear that they’re not going anywhere– er, let me rephrase. They’ve gone everywhere, and they’re only going to keep popping up. Archer’s pain is our pleasure (especially since that flyer is legitimately cute.)

Perhaps the first episode of Season 7 to be completely disconnected from the Veronnica Deane storyline — or is it? — “Double Indecency” had more than enough fun with its one-off construction to make up for any complaints of a disconnect. It’s always a good idea to give Pam Poovey (and her voice actor, Amber Nash) more screen time, just as shining the spotlight on Carol and Judy Greer is consistently smart. There may have been a bit too much reliance on Krieger’s repeated thrusting for jokes, but the only legitimate complaint is that too many set-ups failed to pay off. The two bets made were never settled, and even small details like Cyril’s dramatic makeover (and lost wallet) never played as pivotal a role as has become customary on this lean series. The choice to parallel storylines word-for-word largely worked, but “Archer” felt like it was missing a layer in Episode 7, even if it still hummed along smoothly enough.